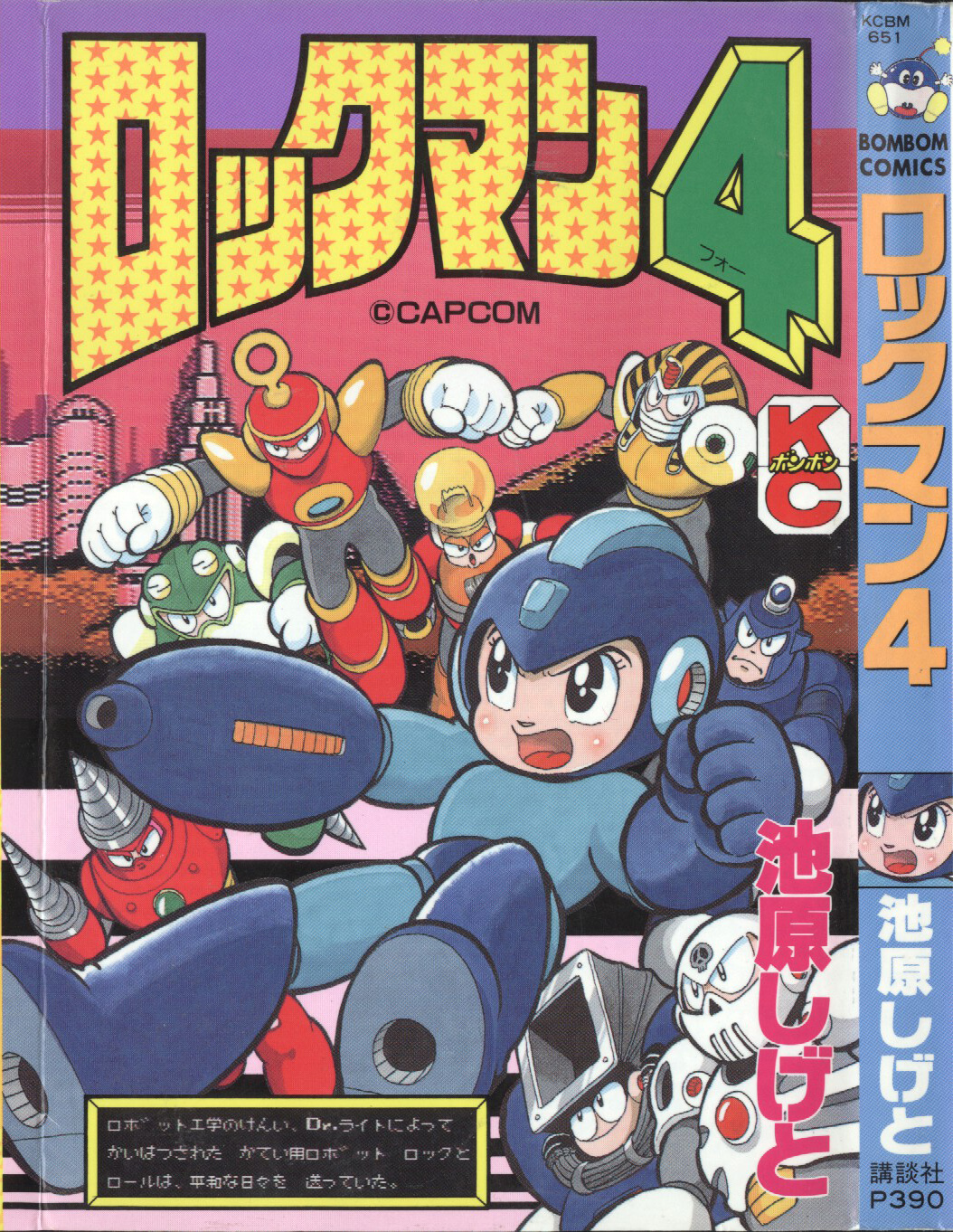 After wrapping up that last Megaman manga it was time to dig deep and check out the next one. Once again this is only one volume so it makes for a pretty quick read at only 5 chapters. It’s a fun enough story that throws you right into the action and does the game justice. It’s always fun to be able to jump back into the world of Megaman.

The story starts off with Megaman beating up Wily again and heading home. He’s just in time because Roll is going shopping to grab stuff for Dr Light’s surprise birthday party. Megaman offers to go with her and even saves a kid from getting hit in traffic. Unfortunately that’s when a bunch of robots start attacking the cities and the whole world is in peril. This time it’s not Wily, but Dr. Cossack who is the big bad. He has control over 8 robot masters and doesn’t intend to stop his mad quest for power. Megaman is forced to suit up once more to take this guy down but is he really ready to defeat such an opponent? Hopefully because he likely won’t get a second chance if he is defeated here.

Since 8 robot masters have to go down in under 5 chapters as well as giving us enough time to deal with the extra levels, Megaman really mows them down. The first few fighters like Pharaohman and Diveman do well enough but after that Mega Man basically no sells them. He essentially beats every robot master within 5 chapters before giving one for Cossack and one for the final boss. It’s not surprising though because Megaman should be completely crushing these guys. He’s just on a different level and has enough raw power to destroy just about any opponent who gets in his way. He’s earned the Mega part of his name after all.

Megaman often gets compared to Astro Boy because they share a lot of similarities. I’d say that this is one such occasion as this Mega Man in particular feels a lot like Astro Boy. He’s a very nice guy living a day to day life but gets serious when the going gets tough. Like with Megaman X, the classic version doesn’t care for battle but he gets less emotional about it. Megaman just takes down the villains and keeps it moving. It’s just the way he handles these guys. Megaman’s a very streamlined fighter after all, nobody gets in his way for very long before he packs them up.

The artwork is also pretty solid. It looks a little more modern than the last adventure so the fight scenes are a bit better but it stays very clear. All of the character outlines are good and the layout is on point. As a result you’ve got a manga that you can read through very quickly. The writing is on point and the action is good so there’s really nothing negative to say here. Especially if you played through the game then you’ll probably be feeling pretty nostalgic when you read through the title. It’s always fun to see the familiar robot masters trying to get in Megaman’s way.

Naturally you can always expect Wily to make an appearance as well. That was definitely a lot of fun to be sure. Perhaps it was not unexpected because he had to show up sooner or later though. Protoman also got to appear for a change which was fun. The one thing is, he didn’t get to fight which is a shame. I feel like by having Protoman in, you just expect that he would at least get 1 action scene to himself. What’s the point if he doesn’t get to throw out any blows except to look cool. He saves someone which is hype but I think they should have added a scene where we see Protoman beating up some bodyguards or something.

The volume ends pretty suddenly when Megaman beats Wily so don’t expect an aftermath. Megaman just showed up to clean shop and that was the end of the battle. Presumably after that he will finally get to enjoy the Birthday party that everyone had been planning so nicely. Due to how direct the volume is with Megaman just running from battle to battle, there’s not a whole lot extra to say about it. The robot masters don’t appear long enough for any true discussion with them either since they appear and then get blasted without mercy by Megaman. They get their quick rematch with Megaman at the end when he has to fight them all again but they barely even get to talk before they’re shut down. It just goes to show how strong he is.

I suppose the emotional moment here would be Cossack’s plot since it’s not like he is exactly thrilled to be going up against Megaman. Still, he’s got to do what he’s got to do. Hostage situations always get tricky. I would have liked to have had some banter with the various doctors though. Seeing them all debate the classic question of robots would be fun and how they should be used or not used in society. Even if it’s a super simplified version that would have been fun too. 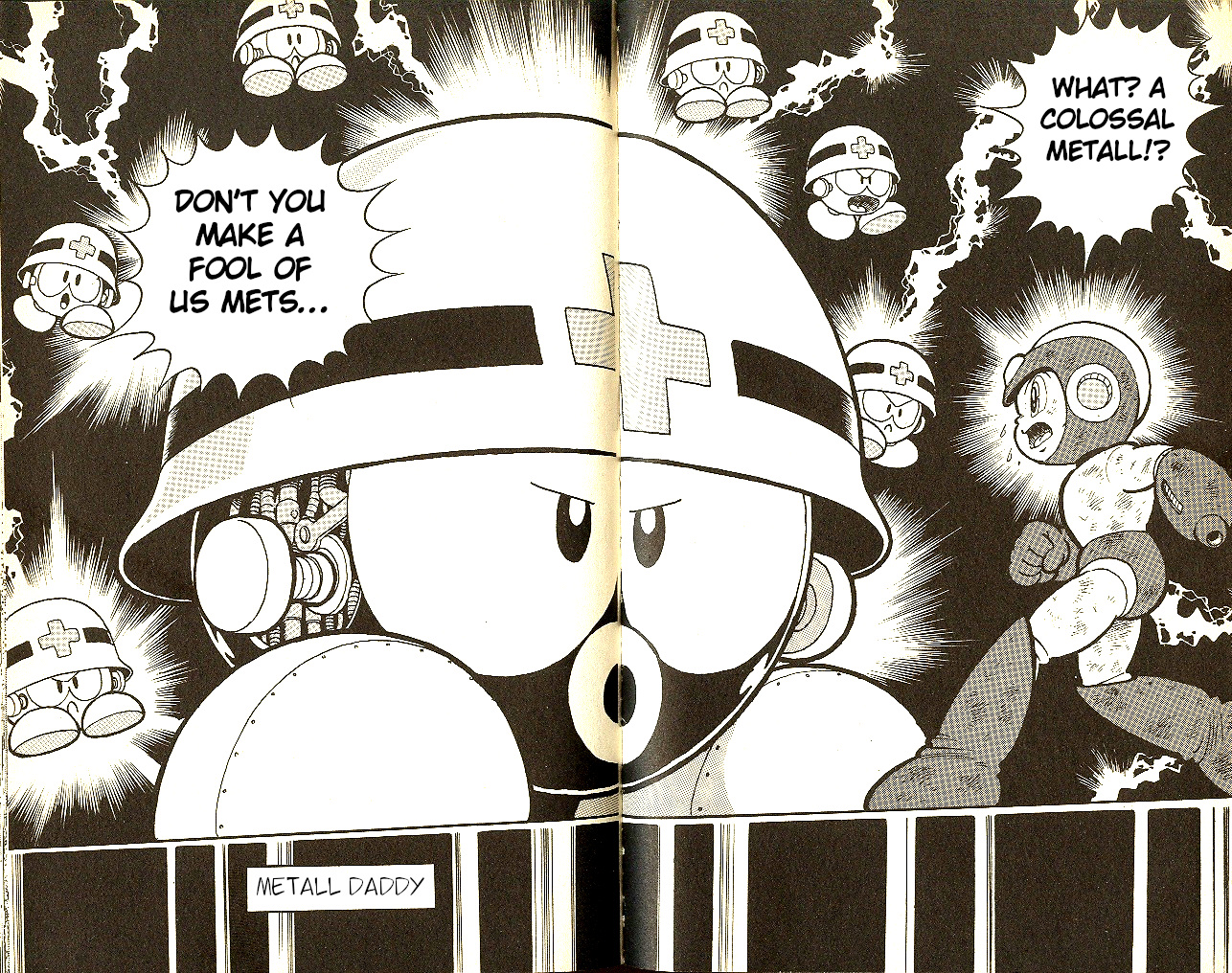 Overall, Megaman 4 is a very solid adaption. These one volume titles are always very easy to read. Personally it’d be fun if the series could be longer since you could really expand on each fight and give a little more story in between the battles. That said, you’d probably need to change the format of the story a bit if you wanted to add a lot of other scenes just because of the way there is typically no break in the attacks. It’s not like Megaman can just choose to stay home sometimes either. So until we get a more adventure styled Megaman manga like that, I’m definitely content to get a bunch of these smaller volumes. At the very least we got to have a giant Mettaur show up out of nowhere at one point which was definitely a blast. If you haven’t checked this one out yet, I would recommend doing so now.