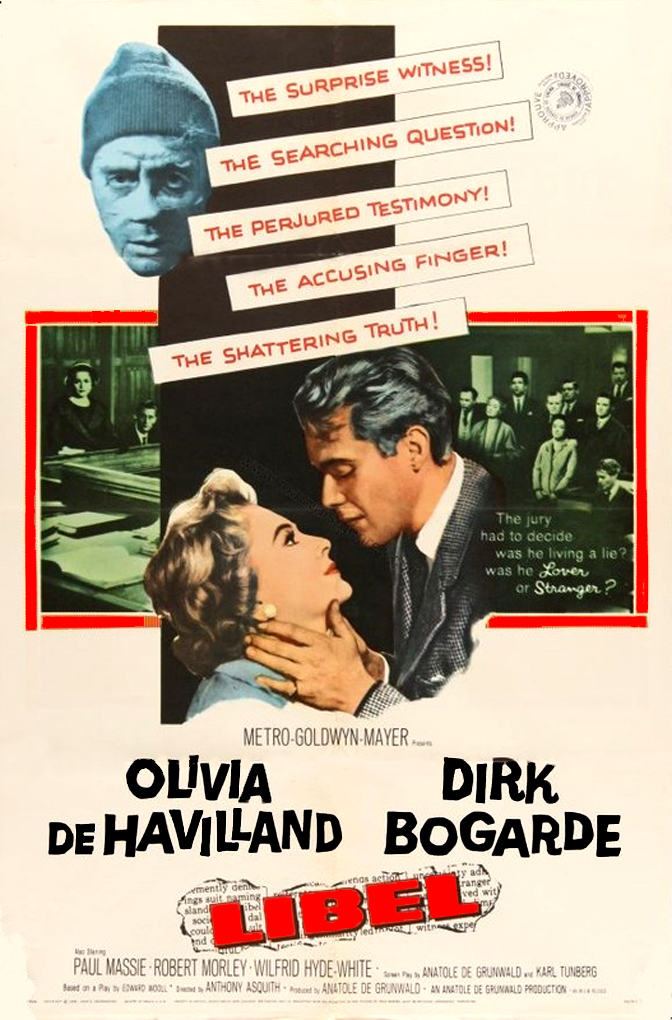 Whenever a film has a court scene I know it’s going to be good and the effect naturally increases when almost the whole film is built around such a case. Libel is a movie that really handles all of its elements really well. You’ve got a strong cast here and a lot going on as well. The movie has a very satisfying journey and conclusion so it’s definitely worth your time to check it out.

The movie starts with Jeffrey arriving home in between tours at the army. He is enjoying a quick drink when a program goes on TV that startles him. It’s his old friend Mark except some things don’t make sense. Mark has convenient memory loss but Jeffrey knows this has to be fake. His friend Mark is dead and this has to be an imposter known as Frank. Jeffrey publishes an article in the paper exposing Mark and so Mark retaliates by suing him. The two of them must now go into court to battle it out and see if Mark is telling the truth or if he is actually Frank. Only one man can walk away the victor this time so they will have to battle it out pretty carefully.

The court is in session for a good chunk of the film spanning several days. It’s definitely a blast seeing the case unfold in real time as the characters try to connect the dots and see what is going on. We get several different flashbacks, some of which we see more than once from different points of view. We learn a whole lot about the characters, particularly Frank who is clearly an antagonist. In the flashbacks he is quick to threaten Jeffrey’s life with a pipe he found and just seems unhinged the entire time. Certainly not someone you can get along with. If anything I think Mark had too loose of an attitude with him. He shakes off the fact that a murder was nearly committed or that Frank was reading his letter. Throughout the flashbacks we see that Mark never took him very seriously which definitely ends up being a bit of a mistake.

It was hard to understand him there. The whole “Both of you stop” is always the worst response when it’s clearly only one of the characters starting something. Mark is a solid main character in the present though. He definitely has a of self doubt thanks to what happened in the war and being a bit traumatized here and there but on the whole he seems to be a good guy. This case is definitely doing a number on him as well though.

Meanwhile you have Margaret who is doing her best to support him even when things get rather tricky. He really isn’t giving her a lot to work with though so Margaret has to find everything out along with the Jury which puts her in a pretty tricky spot. Finally you have Jeffrey who has to be the standout character here. He is quite determined to see justice done and that’s always something you have to respect in a character. He’s not doing any of this for money but to keep up the honor of his friend’s name and to protect everyone from the deception. From his point of view, he can’t exactly let this slide.

You’ve also got some side characters running around as well. One of them is Mark’s cousin who has a story about a scar that makes things difficult at trial. He definitely seems like a slippery character. Then you have the two lawyers who were really good. Both of them do a really good job of defending their clients and I do like how it was mentioned that they get along really well outside of work. It shows that they do a good job of not letting the work ever get too personal. They do their jobs and just make sure to do them well.

All of the court scenes were handled with a lot of dignity which is always important. Everyone follows the rules and so the experience goes pretty smoothly. The actual mystery is explained pretty well too. It’s all pretty logical and does take us from point A to B. The whole amnesia thing is super convenient of course but I guess without that we would not have a film at all. As a result Mark ends up acting a little shady near the beginning of the film with how he keeps so many secrets all the time. Part of it was memory loss and the other part was just hiding things so he doesn’t take any chances which is extremely risky.

The main characters have a dog and a kid but surprisingly they don’t appear much. I’m definitely fine with that so we can cut to the heart of the matter. That said, it does illustrate why it is such a bad idea to keep your doors unlocked all day and allow tours of the residence. If it had been more of a dangerous guy instead of Jeffrey, he would have easily had time to kidnap the family or even just rob some things as he walked out. Of course this film is quite old but you still feel like the whole thing was a bit reckless of the leads. It’s not really important to the plot but when you see the reporters just walking in and taking names, it definitely makes you think.

Overall, Libel is a solid film. The story is very interesting and the characters are good. When you mix that together then you have a good film that can stand on its own and has a good amount of replay value. One thing that was not fully explained was the moment with the jacket. Best thing I could think of was the character being worried that anyone finding out what had happened could get him in trouble but if anything then you would want less evidence right? Leaving the jacket could be worse so I’m not sure exactly what was going on there but that’s really my own question. Beyond that you’re all set to just jump in and have a good time here.