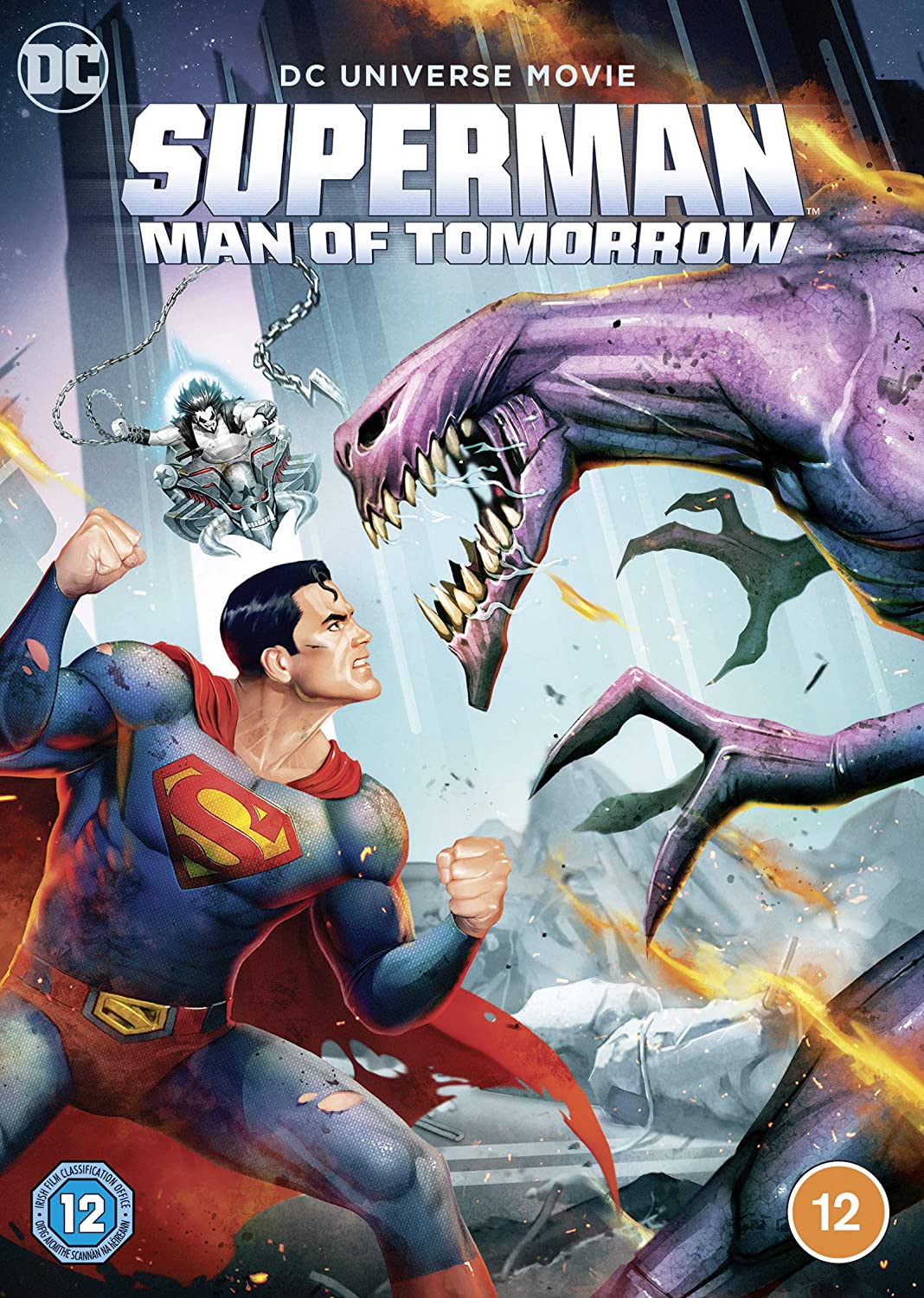 This is really the Superman film I’ve been waiting for. Red Son had a very brief time as the best Superman film for me but I always had a feeling this one could rise to the top. Not only was it bringing in two of my favorite villains in Parasite and Lobo, but it just looked like a pretty good retro Superman story. It definitely has a solid old school feeling while still incorporating some modern elements. I could certainly see this being a modern reboot that could work to set up a solid universe. The origin story also goes pretty fast so we can focus on the more interesting part of his first days as Superman instead of him growing up.

The movie starts with Clark Kent covering a big rocket launch by Lex Luthor. He’s an intern and not quite a reporter yet but is ready to move on up. Right away he’s introduced as a nice guy who makes friends with the janitor and does his best to try and get a scoop without cutting corners. The launch doesn’t go well and Lois is able to prove Lex’s guilt so he is thrown into prison. This is their first meeting so now Clark has seen what the ultimate reporter can do. While the fame doesn’t go to Lois Lane’s head, she is definitely one of the more antagonistic characters in the film so she won’t be making friends anytime soon.

Clark still wants to leave a positive impression but he has other problems to worry about. A space bounty hunter by the name of Lobo has arrived and wants to take Superman down. He claims that Clark is a Kryptonian. Then you’ve also got a mysterious stranger who follows Clark around a lot and even heads to his home in Smallville. Finally, you have the Parasite, a being of incredible power who may very well destroy this entire planet. Superman will have to stop these foes while also establishing himself as a hero for peace and not someone who needs to be feared.

There’s just a lot to like here right from the start. For starters it was nice to see more of Clark Kent. It seems like there isn’t often a lot of time to see the human side for Superman outside of fighting crime so that is always fun. I also like that this is a version of Clark where he is a top notch reporter and this is getting set up by the end of the film. He is ready to one up Lois when needed and he also visits Smallville pretty often. As he mentioned, it’s just a 10 minute trip for him (And that’s probably a cautious estimate) so he can really go and hang out at any time. The Kents also look good and these scenes really help develop the characters.

Then you have the Superman scenes which are a blast of course. I would say the stand out fight is the first battle with Superman and Lobo. While the animation may not be quite as colorful as the mainline DC films from the 52 era, the smooth animation does help with showing a lot of great choreography the whole time. There’s a lot of good back and forth with each character getting some good hits in but I would say it’s clear that Lobo has the edge here. Superman is still growing into his powers of course so he isn’t quite as powerful as he would usually be in later years of his career.

Admittedly when the final boss went the route of going for a giant monster as the final boss I did have to shake my head a bit. It seems like the ole giant enemy approach is inevitable nowadays but you just can’t get any great choreography out of that. Outside of Fate Grand Order where you could really feel the immense impact of the big enemy that the show was going for, I wouldn’t say it tends to be all that impressive. You can have multiple giant foes fighting each other but someone like Superman going up against a giant monster? I don’t think that’ll work out.

Still, it was less about the fight and more about showing off how Superman can use peace to solve some of his fights so that was handled pretty well. It was also a chance to get everyone involved in the fight. I would say Lobo seemed a little nerfed in this one since I think he could have done a lot better but you can’t win every fight right? I half expected Lex to put on his suit but I suppose it might be too early to bring that one out. As it stands, he is definitely not someone you can trust at all here. He is very quick to blast you in the back. It’s not really his most impressive appearance but he’s never all that worried so you feel like he’s got some other plans in the works.

For Lois, as I mentioned she is definitely very tough on everyone here, but she is a fun character. Her power moves were definitely fun and she has an air of absolute confidence about her. She may have lost this final round against Superman but I’m sure she won’t give up. She is always ready to go into dangerous situations to get the scoop after all. I’m sure she and Clark will have a good rivalry going forward if he starts trying to take all the bylines like in the DCAU.

Lobo of course is a fun wild card character to have around. I definitely was not expecting any kind of team up with him so that was pretty intense. He’s one of those characters who really tends to overwhelm the screen while he’s appearing so you never forget the guy. Then you have the stranger who was following Superman around. That guy was definitely a pretty intense figure. I liked how it gave the film an extra element of being a mystery or part thriller. His fight in the night and showing up at the Kent’s place was intense. I do think Superman should have been a little quicker to break things up to be honest but he still did make it before things got too tricky so that’s the important thing.

The film does like its fake outs with death though. Two different characters seemingly die only to return later on. I admit that while I didn’t buy the second one for a minute, the first would have been interesting. I can see why they wouldn’t let it stick since that would start Superman’s career off on a rather depressing note and he might not be able to be quite as cheerful after that. It does work as a dramatic moment though even if you feel like Superman should have stepped in with someone being murdered right in front of him. No matter how weak he was feeling, that’s the time to dash in.

Overall, Superman: Man of Tomorrow is a great way to bring Superman back into the spotlight. It’s a good origin story that introduces him as a great hero who will certainly do a good job. He’s very likable and now even has a bit of a supporting cast for when we start the Justice League saga. Batman was also set up so it may be time for another Batman vs Superman adventure soon. That would definitely be fun. If you haven’t seen this film yet, then you should definitely do so. It really encompasses what a complete Superman film is expected to be. You have Clark digging up clues on his end, Superman saving the day sometimes with power and other times with deductive reasoning. There’s a lot going on here so the whole time you’re just hoping the film can keep on going. If a whole continuity does come out of this film, I look forward to seeing Superman return and have more adventures. There’s always a ton of potential with a fresh slate.