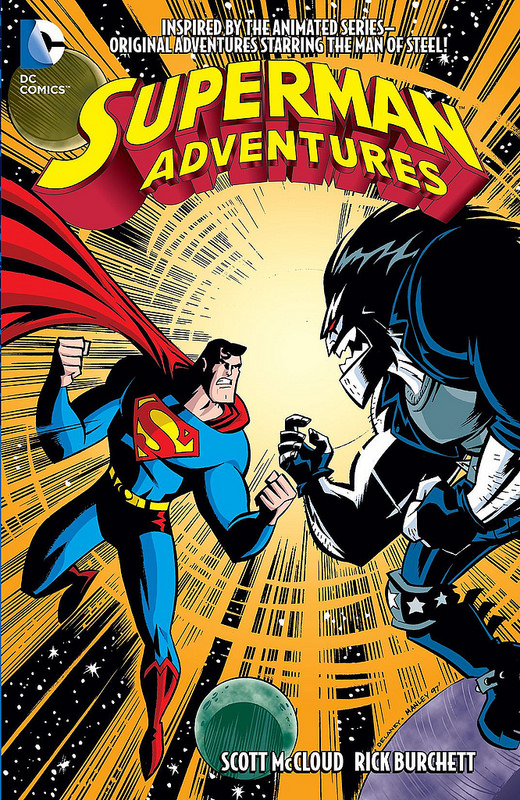 It’s time for the next installment in the Superman Adventures series. Honestly it’s been a long time since I rented a comic so it’s good to start off with the greatest Superhero out there. My local library may have had the biggest selection in all of NYPL, but they’re going to be closing their doors for the next 3 years so I figured this could be my last chance to just go and pick out the ones that I wanted. I got quite a few DC comics and one Marvel one so prepare for those reviews to come out soon. In the meantime, this comic was just as great as I expected it to be.

It brings about 7 issues which is a good deal for a graphic novel. The first two stories deal with Superman contracting a rare kryptonite disease and now he is dying. His powers are fading away and the general public doesn’t know about it so they’re all bashing Superman. They claim that he has lost his drive or that he doesn’t want to play the hero anymore. Lois Lane is one of those skeptics until she learns the truth and decides to join a last ditch excavation to try and cure Superman once and for all. She’ll have to go through a war torn country to find it though, but at least this’ll give Superman a fighting chance.

It’s a pretty fun double comic. Hamilton is still annoying since I know he grows up to be a traitor someday but I suppose I’ll try to work around that. Lois is also a little iffy since I would have thought that she’d suspect something instead of also thinking that Superman was getting lazy. At least she is a woman of action though and quickly does her best to revert the situation. It’s just as much a Lois story as it is a Superman one and the dynamic works well. The ending is a little sad for a doctor who helps Superman out though. He was being blackmailed by Lex and is basically told to destroy Superman or to die. The doctor decides not to do it and Superman just tells him that he did the right thing…and then leaves the Doctor. It’s heavily implied that he just left the Doctor to his own devices which seems a little cruel of him. Superman didn’t seem very sympathetic at all but I suppose he’s still sore at almost dying. It would have been a sad way to go.

The next story had less stakes but was pretty amusing. An alien race arrives on Earth and challenges Superman to a best of 3 bout with their champion. He is incredibly strong and has some complex weapons which he uses to overwhelm Superman. The Man of Steel will have to put all of his common sense to use to defeat this opponent and that’s just what he does. What do you do when you’re fighting someone and both of you have weapons that you don’t understand? Just throw it away and win in fisticuffs. There aren’t many who can beat Superman that way after all. The writing may have been a little weak as this guy should not have been throwing Superman around, but I suppose I’ll overlook it in the spirit of just having a good time. Superman also should have been able to lift his medal at the end if you ask me.

There was also a special featured in this collection where Lobo is back in town. Superman inhaled a gas that is deadly to everyone on Earth so he goes to space to find the cure. Turns out Lobo is after the same cure, but only so he can collect the reward. The two ultimately have to team up against a bunch of aliens. Unlike the more gullible characters who fall for Lobo’s tricks, Superman is one step ahead of him the whole time. Their group dynamic is pretty interesting and I’m always up for some good banter. Lobo definitely doesn’t look nearly as impressive as Superman in this comic and I can certainly agree to that. While there may not be as much action as in other comics, it’s certainly one of the better issues here.

If you want one of the weaker issues, look no further than the Robocop issue. There’s this assassin with a Robocop suit who is out to silence all of the witnesses who are against Lex and the other local villains. A TV reporter with something to prove ends up telling him where the last witness is by mistake so now it’s a race against time. It wasn’t a bad comic by any means, but this guy isn’t even remotely a threat during the entire issue. Perry was also being a little unreasonable with how news is only what is written down and not what is recorded. As Lois pointed out, he should just be happy that his cameras are always the first ones on TV. I mean you can’t ask for much more than that right? Even if it is weaker than the others, I’m up for a more street level Superman comic once in a while.

Back to the more outlandish plots, Mr. Mxy- has returned to try and make Superman’s life twisted. He erases Superman’s memories and alters reality so that Clark was never Superman and he is instead. It takes a while for Superman to piece the puzzle together, but Mxy was pretty thorough with how much he changed reality so I can’t really blame him. Superman’s plan is pretty sound after that though. Mr. Mxy is definitely one of his most overpowered foes so it certainly involves plot hax each time. Mr Mxy just shouldn’t read stuff that he doesn’t know. That being said, I’ll take this kind of plot hax over serious power level stuff any day. I also thought Mxy did a great job of impersonating Superman even down to the personality.

On another more street level comic, Bilbo is having a tough time at the bar. See, he’s always lying about knowing Superman and it has finally caught up to him. He feels pretty bad, not about constantly getting drunk or lying to everyone, but he feels bad that nobody bought into his lie. He decides to be a real hero and gets to work beating up a gang. Superman shows up as well and feels bad for Bilbo so he officially makes them friends so now Bilbo isn’t actually lying when he says the stories. At least he has one true story, the rest are technically lies. It’s an entertaining issue, but it’s really hard to actually feel bad for Bilbo as my summary implies. He really brought all of this down upon himself after all. Nobody was pressuring him to make up those fantastic lies after all and he kept sinking himself into a deeper and deeper hole. The comic does show what a nice guy Superman is though.

Finally we have the big Dr. Fate comic. It seems like everyone went to Zatanna’s family to train as Superman also went there in his youth. He worked on fighting monsters and becoming immune to monsters. In the present, one of those monsters has now escaped and aims to take Superman down with him. Superman must remember his training which he can’t remember too well at the moment and take them down. Fate also shows up at the very end, but not as much as you would expect. While the stakes are higher here than in most of the other comics, it didn’t work too well for me. The whole explanations while in the portal were pretty convoluted and it jumped from the present to the past a little too often and suddenly. It was a little hard to keep up with and even the art was rather chaotic. It had a good start and a decent end, but it just all felt a little hollow to me. Ah well, magic is supposed to be confusing I suppose.

The art is very good during the comics. The issue with the best art was probably the Lobo special which makes sense since I imagine they definitely put a lot of effort into that one. The whole collection is quality though and it really captured the DCAU style. It would have been nice if these stories could have kept on going for years and years, but I think we’re reaching the end of them. I have the next collection at the ready though so I’ll be reading that one very soon.

Overall, The collection is a pretty good size. 6 normal issues and two specials is nothing to sneeze at. Superman’s the main character so you can’t go wrong there. It’s his DCAU personality as well so he’s essentially the perfect main character. It really is a Superman story as well since there are basically no guest stars. (Fate appeared so briefly that it barely even counts) I do love me some guest stars and the next collection has at least one, but it also reminds you that Superman is holding up the whole collection and doing it rather easily. Just as important, there are no real negatives in the comic. There are no objectionable scenes of any kind. It’s another reason why I loved the DCAU. You didn’t have to be nervous about reading through it because you know it was made for all ages. The writing is great and the comics are a blast. This was really DC at its height and I still miss these days. If you want a trip down nostalgia lane, this is a great place to start. It’s a must read for all Superman fans.

This is a tricky match and that’s coming from a DC fan! Lobo has been shown to keep up with Superman in the past, yet he has never looked very impressive compared to other heavy hitters like Black Adam, Doomsday, or Sinestro. He does have a Red Lantern Ring though, which helps to balance things out. Wolverine has the Phoenix, but he’s going to have to take a loss in this round. It’s a close battle, but Lobo just has enough feats to squeeze him by! Lobo wins.

If only Santa Clause weren’t so old, then maybe he could try and take Lobo down for the count. Still, Lobo is a lot stronger and faster than Santa Clause can hope to be. One day Santa Clause will be back to show the world that his fighting skills will always be there. Lobo wins.

Superman has incredible abilities that have made him a top contender for a long time. Lobo’s plenty strong and has actually been compared to Superman, more over some would say that he can beat Superman.

Well I wouldn’t go that far. Lobo’s a strong fighter, but in the end he lacks the speed and power needed to take care of Superman. Superman’s the Man of Steel for a reason. Lobo will be back and his rivalry with Superman will continue on. Of course he still won’t be able to take on Superman…..well now that we’re in the New 52 who knows what might happen. Superman wins.