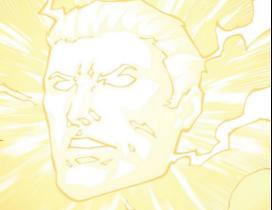 One Above All has some pretty “awesome” power, but in the end he’s not quite a match for Goku. Goku has the Kamehameha Wave and it does some pretty heavy duty damage. It’s not something you want to mess with. Goku has beaten guys much stronger than the One Above All and lived to tell about it. Goku wins.