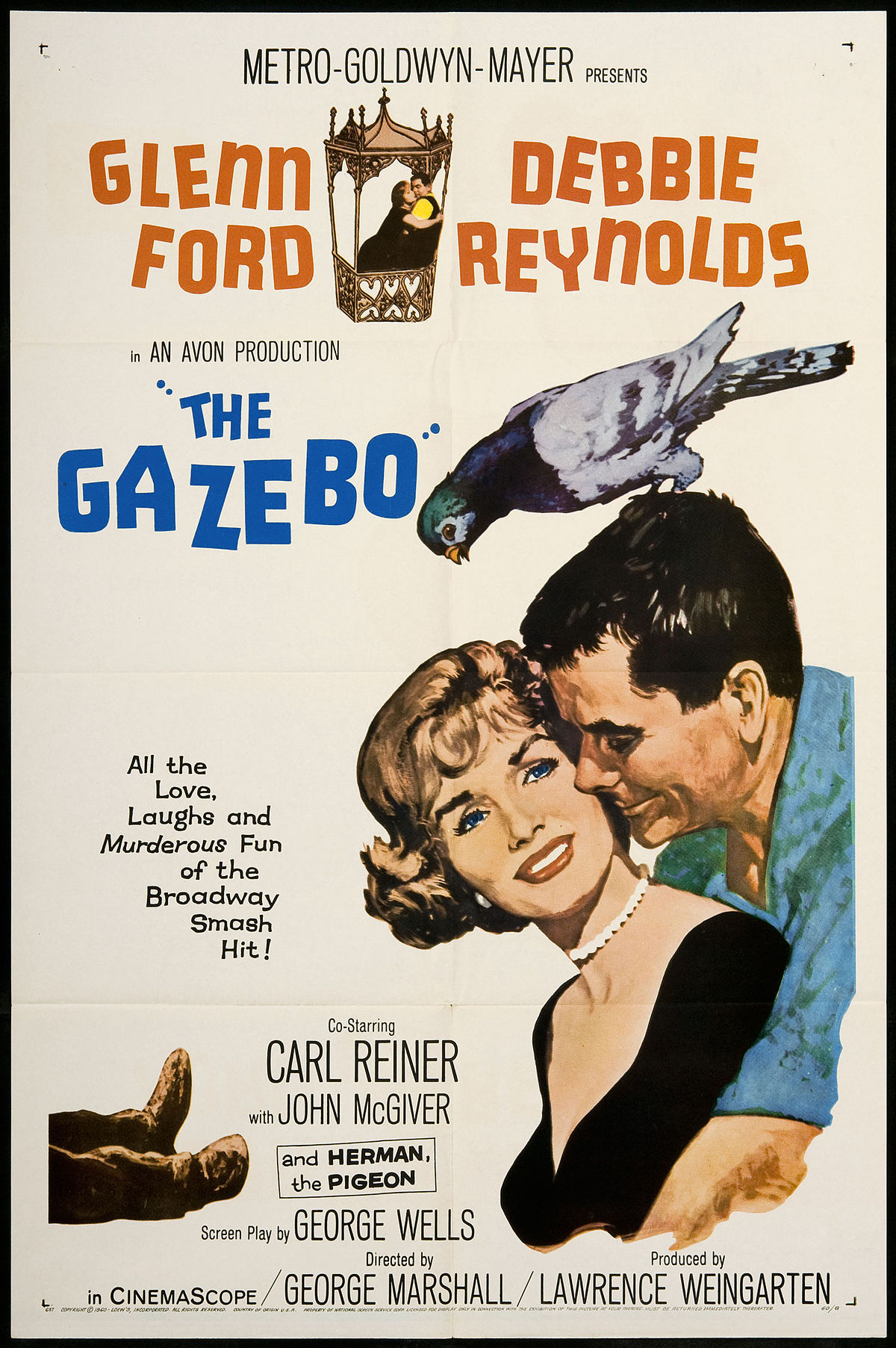 Looks like it’s time for another comedy film involving a main character who’s in over his head and villains running around. The Gazebo is a solid film all around with a lot of suspense and crazy antics going on the whole time. This kind of film always has a lot of replay value and with the writing on point, it’s a film you can basically recommend to anyone. I can’t say I would ever be tempted to add a Gazebo to my backyard though.

Elliott is a writer/director who is super stressed out all the time. His blood pressure is up and the guy hasn’t been sleeping very well. Part of the reason for this is that he’s being blackmailed by a crook over an affair he had a while back. The guy is threatening to take this to the magazines and Elliott’s wife Nell would end up finding out. Elliott has been paying the guy off but at this point he’s pretty much out of money. He could sell the house but even after sabotaging it, Nell doesn’t want Elliott to sell it. Elliott believes he only has one option here…he has to murder the blackmailer.

Of course the whole film would have been over if Elliott had just told Nell from the start or better yet…if he had simply not had the affair at the start. He has a great marriage right now so that was definitely a terrible move. Even though it’s an event from before the film even started, it does mean that he’s not quite as sympathetic as he would be otherwise. He certainly goes in depth with his plan to wreck the house though. Whoever gets it next will definitely be in a whole lot of trouble.

For Elliott’s character, the fun is often in seeing him panic all the time. His voice cracks quite a lot as he really isn’t used to doing this kind of thing. There also tend to be a lot of people making house calls so his plans are interrupted a whole lot. Keeping a secret in a house like this is awful hard for him and the Gazebo ends up making things a lot trickier for him even though he initially thought it would save him a lot of trouble.

Meanwhile Nell is really solid here and she is the best character here. She defends Elliott a lot when the police come along and is doing well balancing her work career and home lifestyle. The Gazebo may not have thrilled Elliott but it was a nice thought since she was trying to get him a peaceful place to work. I also like how she handled a similar blackmail scheme that was targeted at her. She’s definitely not a character who stays on the defensive.

Elliott has a best friend named Harlow…but that guy is definitely pretty suspect. He does get a little overly familiar with Nell which Elliott notices and while it may just be the guy trying to be friendly…I wouldn’t trust him either. Harlow is trying to just do his duty as a detective so naturally some suspicion falls on Elliott. Ultimately you do get the impression he doesn’t want Elliott to be guilty but the hero does make himself seem super suspicious the whole time.

Elliott did adopt a pigeon named Herman early on in the film which was nice. The pigeon gets a solid role here and is always around to keep things light. He even had a solid role in the climax which was nice to see. The final scene made for one last gag to end things off on that even made a good amount of sense. I could see the event happening especially since caps are easily replaceable.

There are also a few supporting characters running around like the guy in charge of installing the Gazebo. That guy was cool and had great customer service. He did everything he could to maintain the Gazebo and even gave a lot of free advice. Then you have the lady trying to sell the house. She was certainly dedicated as she even worked after 10PM.

I feel like the various time periods mentioned in the film had to low key be a bit of a parody or part of the humor though. The construction guys would show up at 10:30PM, the lady showed people around the house close to 11:00PM, the best friend randomly entered the main character’s house after 1:30AM to chat, etc. It seems like the film intentionally had everyone enter the house super late and you just wonder if everything would usually be that late. Even Nell apparently always gets home close to midnight so I guess the shows are always late night plays. That part makes the most sense since if that’s the schedule then it’ll always be the same. The rest felt a little suspect.

The Gazebo is certainly a funny film most of the time but you also do get some scenes that feel like they have real danger to them. One such scene is when the villains capture Nell for example or when the blackmailer calls. The movie does a good job of building up some tension there to offset the rather light hearted nature of the film. On the whole I’d say it’s definitely a cheerful movie of course but it does have range.

Unsurprisingly the writing in the movie is very good. The characters all sound quite reasonable and even when hurling insults they tend to be polite. Well, Elliott is pretty direct in how he talks to people so he can just throw insults out rather plainly. While I wouldn’t say this is a film that is built around a bunch of twists, there is one particular aspect involving Elliott’s big confrontation that plays out throughout the movie. It takes a while before you know everything that happened as each character slowly gives Elliott more information that completely changes the situation every time. You have expect him to have a heart attack by the end.

Overall, The Gazebo is a fun film. It’s got a solid blend of funny scenes and some tension as Elliott continues to dig a deeper and deeper hole for himself. Every time a character misinterprets the situation and throws him a life line, he manages to get himself right back into trouble again. It’s a movie where the humor has held up quite well and the writing is good as expected. With a satisfying conclusion at the ready, this film won’t disappoint if you’re looking for a good time.

2 thoughts on “The Gazebo Review”