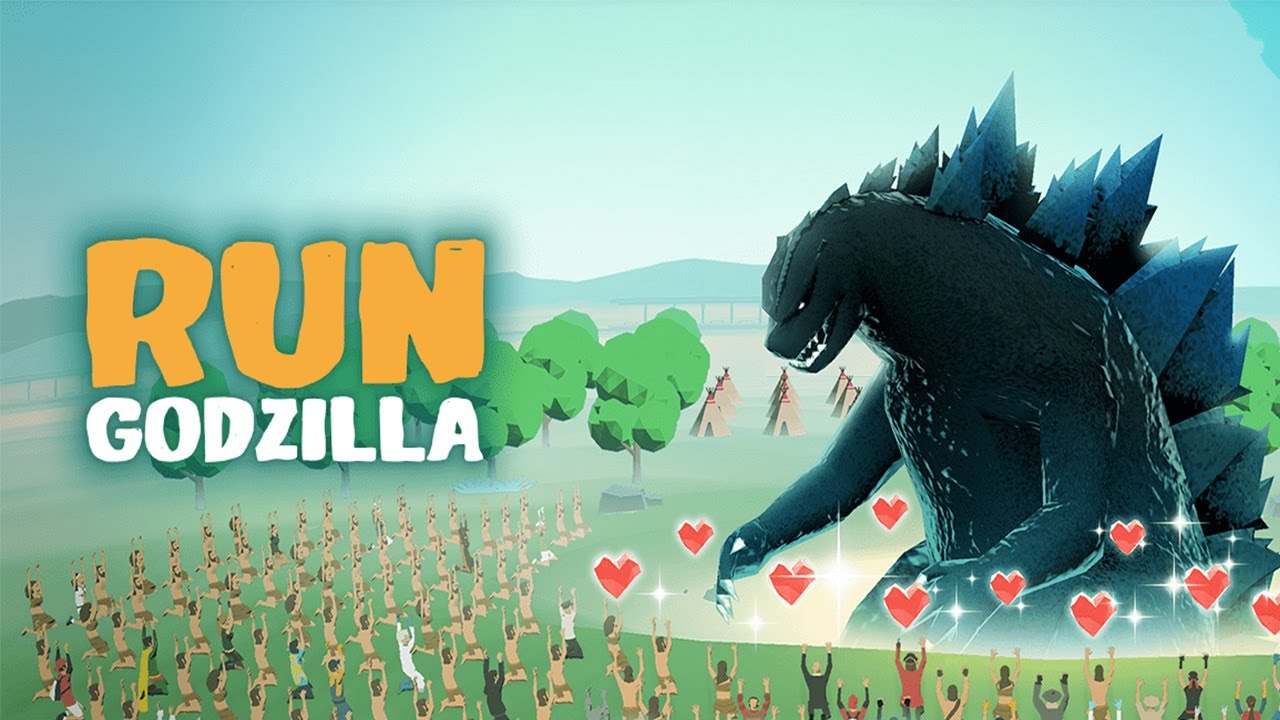 Oh no, this one was bad. This one was reeeeeally bad. It has to be one of the worst mobile games out there so my good run of mobile titles is definitely over between this one in Crash. This is an extremely lazy game to the point where you have to wonder how it’s official. Burning Godzilla is blue!! Yes you head that right…in this game Burning Godzilla is just the normal character model but turned blue. Oh no……this game wasn’t even trying.

Okay so lets get into it. The game only has a single main theme so get ready to hear this forever. The game starts with two guys throwing info dump at each other. Effectively they decide to pray to a shrine and Godzilla appears. These two can create Kaiju out of prayers…..but only temporarily. After 9000 seconds the Kaiju will die of old age or just wander off. The cutscene’s kind of meta so maybe he just leaves. Now that they have a Kaiju I suppose we’re going to save the world, fight other Kaiju or do something like that right? WRONG!

The two guys decide to have Godzilla race against other Kaiju. And that’s the extent of the game. Now you may be thinking this can be cool as you control Godzilla against these other Kaiju and use attacks to slow them down though. That’d be fun so of course that’s now what happens. The A.I. controls Godzilla completely. Wanna know what you can do? You can change the camera angles which has absolutely 0 impact on the race and you can cheer for Godzilla which makes him happy and speeds him up ever so slightly. Fortunately there is a skip option so after a few seconds you can skip to the end of the race. Your cheers barely have an impact as he’ll usually win even if you skip the race so I recommend doing that.

You can already see how futile this feels. I’m just getting started too. So in the hub world you can feed the people praying to Godzilla so they pray harder….it also extends their life. They’ll die in around 600 seconds otherwise. You can use gems to buy(?) more followers so maybe instead of dying if you stop feeding them it just means they won’t bother to pray anymore. You can also use gems to upgrade your forest.

Now the kicker, the game uses a time system. So all those upgrades you spent on the shop? All gone as soon as you participate in any kind of race…which you’re supposed to do. Your Kaiju also loses a lot of his remaining time left on the planet if you race. Yet, that’s the only thing to do in the game so why wouldn’t you race? There are 38 levels in the game. I managed to clear around 24-25 of them. Its a little tedious though because only 2 levels show up at a time and sometimes they’re both old. You have to keep exiting and re-entering the menu to shuffle the levels until a new one shows up.

At least you have a sense of progression though right? Wrong! When your Kaiju dies all of your data is erased as well. Yes, any record of your completing a single level is gone. You lose all of your apples, gems, followers, milestones, everything. The only thing that carries over is a fraction of your original Kaiju’s stats so your next one will be stronger. At least you’ll get a new one next time right? No, not that either. You have to pay 2 bucks a piece if you want any other Kaiju. Otherwise you’ll keep on getting color swapped Godzillas to play around with.

I admit that as it is I never like when games don’t let you control a character at all. Still, it could have at least tried to be decent but with the game completely erasing your data every time your Kaiju dies (Every 9000 seconds and you lose 200 seconds every time you enter a race) then there is really no point. The entire game feels completely pointless if it’s going to be erasing your data like that. Why bother getting invested or trying to have a good time if it’s just going to be like that? The game is punishing you for playing it a lot since you can keep the game off which will postpone how long your Kaiju has until it dies.

The writing is terrible as well. The info dump from the two characters at the beginning is handled poorly. They’re both talking in circles about things that don’t even matter while not even properly touching on the mechanics of the game. Instead they lazily tell you to just read the help section in the menu at the end. If you’re going to do that then don’t have a half hearted tutorial at the beginning.

The graphics are also awful. This is the kind of game that will forever taint the image of mobile games for someone. These have to be the least detailed character models I’ve seen in a long time. I’m sure a Godzilla fan with some good computer programs would be able to churn out something better in a day. It feels like the studio was given the budget of a snickers bar to come up with this. It would explain why there is only a single mode here and virtually no budget. The game still has the nerve to ask you for a lot of money to upgrade your facilities and buy new Kaiju. They’ll all be deleted within 9000 seconds anyway so why would you possibly spend that kind of money (20-50 for bundles)?

Overall, maybe I got spoiled by the first Godzilla mobile game which was actually great but this one was shockingly bad. It’s the kind of game you want to finish up and delete right away. Having the game delete my data made that a whole lot easier. This is the first of the 3 mobile games from Toho that were being hyped up and now I’m worried for the next two. I just downloaded the second game. While it’s too early for me to pass judgment I am a little worried. The next game has the exact same musical track, character designs, menu layouts, etc. It seems to be a clone, only this one is about destruction and you can move around. I just hope that doesn’t mean it also has a time system because that will absolutely be super annoying. This is easily the worst mobile game I’ve ever played in my life, I highly recommend staying far away from it.