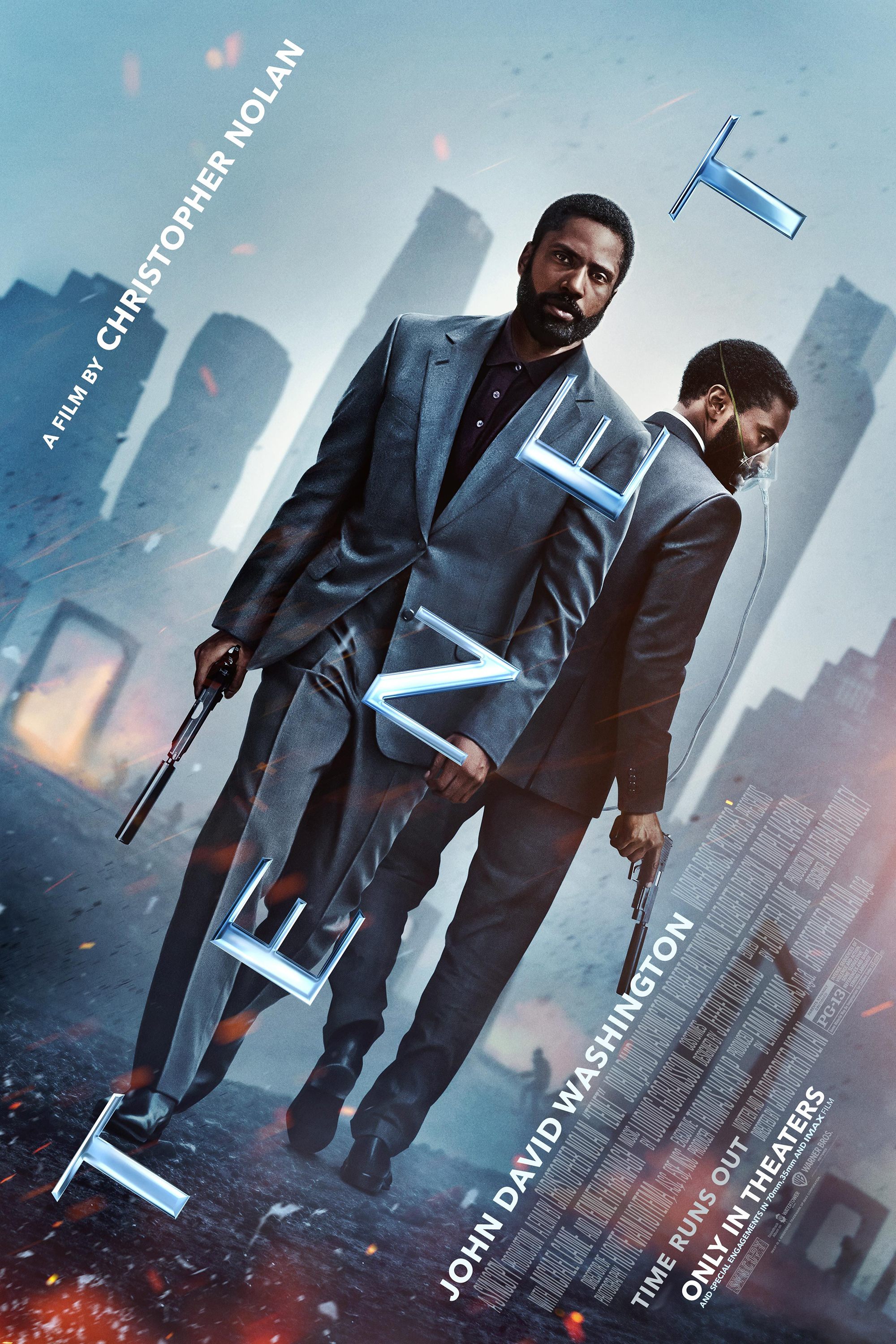 Tenet is a film that certainly got a lot of hype before it came out. You really would see it just about everywhere and the trailer promised to bring in quite a lot of concepts. Tenet definitely delivers on bringing in an intricate experience. While I would say the film itself may end up getting lost in its own concepts, it makes for a pretty solid film that keeps up with Nolan’s previous adventures.

The movie starts with the main character in a pretty tough mission and unfortunately he isn’t able to get out in time. He’s captured by the villains and his whole team is murdered. He manages not to cave in when they start torturing him though and tries to eat his cyanide pill, only it was a fake. He wakes up back in a hospital where he is recruited into a global secret organization known as Tenet. They use technology from the future to keep the present in safe hands. Right now, a force is threatening to unleash World War III using this technology. The only lead is a man named Sator so our hero is going to have to find out what is going on by learning about him.

There’s a lot going on here right from the start. There are also a lot of plot twists and new developments of course along with time loops so you do want to keep track of things. The main concept here is the introduction of the “Inverted” premise. For example, an inverted bullet is one that not been fired yet, but it still exists anyway so you can fire it. Essentially you are reversing cause and effect.

As a quick aside, I always thought that would be a really useful power. In Fate, Lancer’s Gae Bulg has this ability and yet it has never worked a single time in every Fate media I’ve seen. It’s a shame because there’s a lot of potential there. Back to Tenet though, it rarely seems to work here either so maybe reversing these things isn’t as effective as I thought it would be? It’s interesting to see the bullet holes before the bullet appears and things like that though. An inverted nuke could even destroy the past according to a character in the film.

Mainly all of this works due to time loops. Tenet follows the time travel theory I like where you can always go to the past and change things as opposed to it being stuck by destiny. In a sense all timelines run at the same time so when you change it you probably end up creating another verse but to the characters here there is only one base universe. Due to that, in a way they will keep on reliving the same days for all of eternity with no end but each self only experiences it once.

I like time travel so these things are always pretty interesting. That said, at times it does feel like Tenet is trying to hard to throw in a bunch of new elements that it doesn’t actually consider how they would all work together and gets lost in its own experience. For example, take the Inverted humans. (Yes, humans can go inverted as well) We are shown that they can create body doubles by time leaping more than once and can invert at will. At one point the hero is fighting one agent and every time he comes close to winning the guy would rewind time a bit to try different tactics. No matter what he tried, the hero would keep countering but with unlimited retries the guy would eventually find a good option.

How can a normal human beat them? At the end of the film we have a chaotic battle where there are 4 sets of teams fighting, two inverted and two normals. The normals are holding their own though and that’s hard to buy considering all of the advantages that the inverted ones have. It’s hard for me to see how they would lose. If you take this a step further, you also don’t see how the future team can possibly lose since they started this and have the full glimpse into the past. Keep in mind that the hero is absolutely essential to crushing the villains and he wouldn’t have been around for the first loop.

That gets you into a debate on time loops itself though. For a time travel film that’s why you can typically protect yourself from official plot holes. If something doesn’t make sense, you can say that it’s just because it hasn’t been explained to the protagonist but for another character it would make sense. Time loops aren’t meant to make a lot of sense either because somehow they started without an entrance point and in theory there should be no way to end it or it would have already ended unless you have a specific point of entry. So I wouldn’t say any of these things are plot holes, but more like logical inconsistencies where I would argue the heroes never would have stood a chance. If you ask me, the inverted humans should have just been a little nerfed. Take away their ability to rewind time at will and I think that solves everything.

Back to the film, while the story and time travel is a major part there’s still other things to talk about. For starters, the writing is pretty solid here. You couldn’t even attempt to do such a grand plot without good writing and this film pulls it off pretty well. From the start you’re definitely interested in what is going on. I would actually say the first half beats the second half in that regard. I liked the mysteries going on as the hero tries to find things out. Their “Mission Impossible” on breaking into a building and also breaking into the safe later on were a lot of fun.

The movie has strong dialogue throughout and partnering that up with these stealth missions worked really well. In a way you’re even more invested in these moments since the poor hero is really thrown into a rather strange situation. While the climax has a ton of action, with all of the time looping going on you don’t feel the same amount of tension since you can always redo it if things go wrong. It made for some nice visuals but it’s a bit of an emptier climax than you would expect.

The actual ending of the film is quite excellent though. We get a great final conversation between two great characters and one sub par guy who always follows rules even when they’re awful before cutting to the “present” for one last great scene of closure. It ties back to another scene really well and delivers an excellent final line for the hero. I was definitely quite pleased with the ending that’s for sure.

One plot I didn’t really care for was with Kat and Sator though. Sator’s the main villain here who is also an abusive husband who has his wife Kat trapped in a relationship she can’t get out of. Part of the drama here is that she is hoping the hero can get her out of this but he can’t get rid of Sator directly without causing more trouble. I wouldn’t say Sator ends up being even a remotely decent villain. He certainly knows how to describe the violent ways he ends his enemies but that’s about it. The guy can’t fight for beans and is only in such a powerful position because he lucked onto a great connection with future tech. Kat’s plot is definitely quite tragic so you’re rooting for her to get out of this, but it’s not the kind of tragic element you really needed in this film. The plot comes full circle and does tie in so it’s not extra baggage or anything but I would have just substituted it with something else. Their scenes tend to be the weakest ones in the film.

Tenet is at its best when the main character’s partner Neil is around. I liked this guy from the start. He’s quick on the uptake so no matter how crazy things sound, he wraps his head around it. He’s not constantly being shocked at everything or panicking. He’s just ready to get the job done no matter how dangerous it gets. He was easily my favorite character in the film and the hero should definitely be glad he was around.

The hero is also solid. In case you haven’t noticed by now, he never shares his name in the film which is why I haven’t said it. It’s an interesting approach, almost like a video game since you can make his name out to be anything. He gets the job done and is always ready to make the right call which is also like something out of a game. As a result I could certainly say he’s an ideal lead and someone you can count on as well. Teaming up with Neil, the two of them could clear any mission here.

Overall, Tenet is definitely a solid film. I can see how the plot could make this a trickier watch but films that go for deep/ambitious stories end up being really well done when executed well. Sometimes it doesn’t work out so well like the Godzilla trilogy or the final Iron-Man anime film which went for deep themes but it felt more on the empty side. This one may try at times to get things a little too entangled but I did like the core concepts introduced here. As long as you like a well written mystery/thriller then you’ll like this one. There’s also one theme that plays many times during the film which is quite catchy. It has a nice ominous feel to it. If the film starts to get too crazy, don’t overthink it and focus on the main crisis at play here of stopping WWIII. If we do get a sequel that would definitely be pretty interesting but in a sense I think the loop would need to be broken to get some more tension in here unless you have the sequel take place far enough in the loop where we’re not sure of how it ends.