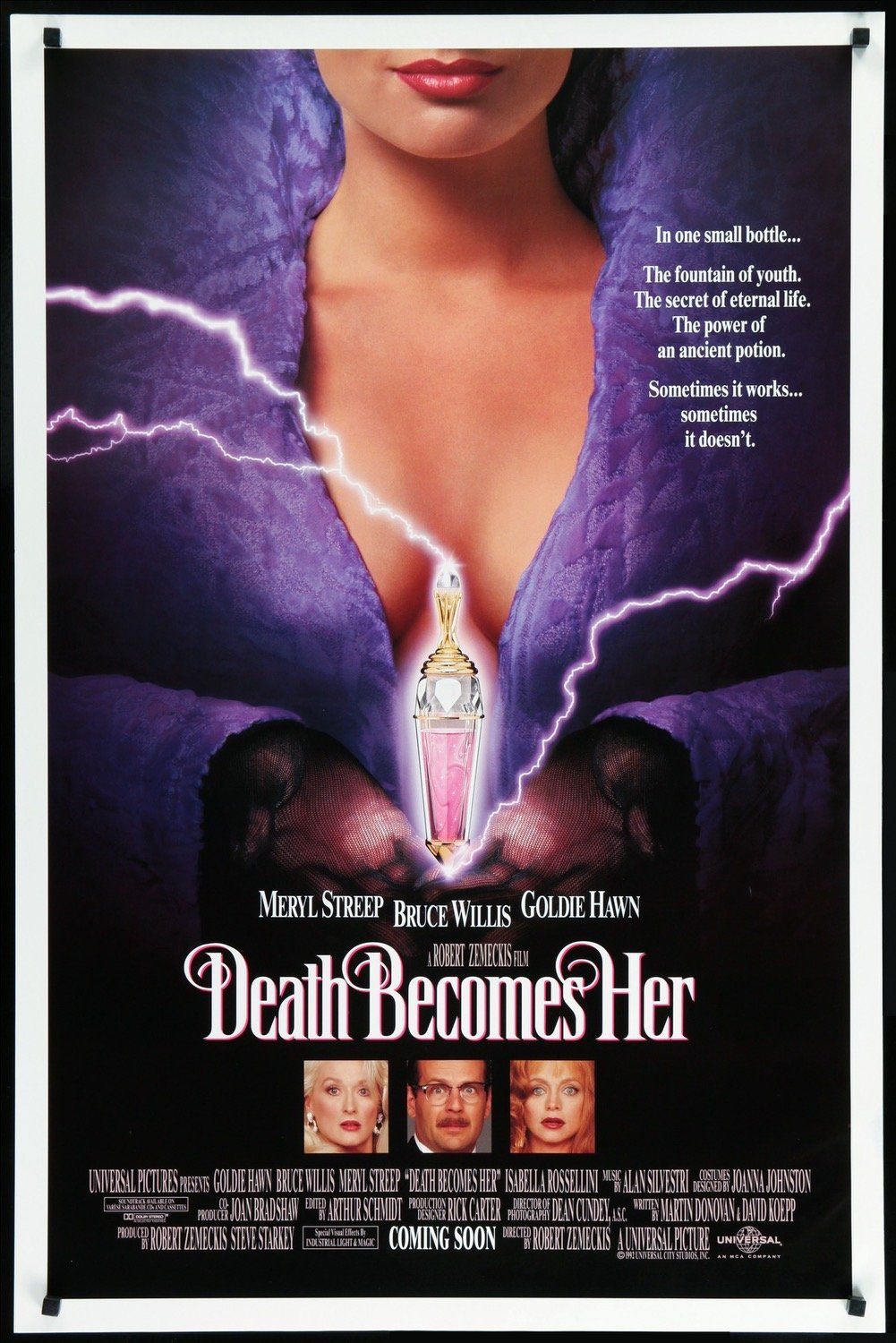 Death Becomes Her is a film that shows the dangers of immortality. I would almost say that should be a spoiler but a lot of the posters showed this already and I imagine it’s in the trailer so it should be treated as part of the main plot. That said, it would have worked as an effective twist since it’s a while before that happens. Finally, we have a movie that shows why being immortal isn’t necessarily a good thing. I’ve always said that you also need regeneration in order for the ability to be worth it. Otherwise it’s just going to be more of a weakness as you grow old and are forced to survive for eternity. The film has some fun moments and eh moments so it perfectly stays at the center of 0 and 10.

The film starts out with Helen taking Ernest to a film to watch her “friend” Madeline. Helen is quite resentful of her to be honest since Madeline steals every guy she ever goes out with. She has decided to take her current man Ernest on a little test to see if he’s faithful. Can he survive the “Madeline effect” or will he succumb like the rest? He does…instantly. He marries Madeline and Helen decides to murder her after years of living like a vegetable. Can she really pull this off? Meanwhile Madeline has been cheating on Ernest for years but wants to look younger so she can do it all over again. Fortunately there is some magic in this verse.

I think from the start the film wants to tell you that none of the 3 main characters are good people. Ernest has no backbone as he jumps from one girl to the next. He has no motivation and just sits by as Madeline cheats on him. The whole town knows about it which makes matters worse. The only thing he’ll get out of bed for is murder like when he tries to finish Madeline off. As a result I also couldn’t buy into the end of his character arc. He tries to be the better man by the end but by this point it was just too late for this guy. You’ll be shaking your head at him.

As for Helen, well she probably shouldn’t have taken Ernest on this little test of hers. Now, you could say it was good to get this over with than once they were married but I’d say once they are married it should be easy to avoid her entirely. Helen’s also gone after quite a few guys it seems so you also have to wonder if her love is really all that serious or a matter of pride at this point. Helen is also completely serious about wanting to murder Madeline by the way so that’s another reason why you would definitely not be able to call her a hero.

Finally you have Madeline…who is cheating on Ernest all the time. There’s no way she’s a hero here and she is portrayed as being extremely vain. She comes close to getting the doctor to give her extra shots even though it was against corporate policy. Madeline really only looks after herself at all times so you definitely can’t trust her.

With the main characters all acting like true antagonists that means instead of rooting for any of the characters you’re really just cheering the craziness on. For example the best scene in the film is when Madeline grabs a shotgun and just blasts Helen. For starters, it was just really unexpected and it also shows how you can cut loose when both characters have extra powers. They can afford to have a real fight and it’s all quite intense. This could have easily transitioned into an over the top action movie if needed as they escalate against each other to claim Ernest.

They can thank Lisle for this as she found the secret potion of eternal life somehow. It’s definitely an impressive substance to be sure as you effectively can’t be murdered now. It also helps you look quite young for a little while. I guess maybe you need large doses of the stuff or you begin to quickly fade though. Maybe it’s even a bit of a scam since Lisle still looks good but perhaps if they had joined her club they would have gotten more doses. Regardless they definitely should have stuck around since leaving did not help them in the slightest.

The humor is good at times and weak at others. Helen getting quite fat as she sulked about losing Ernest would range a little more on being gross than funny for example. It was an effective way to show how depressed she got but it definitely could have been toned down if you ask me. The film also has quite a bit of fanservice with the various characters, particularly Lisle as it demonstrates the effects of the potion. With all the cheating going around I can safely say that none of the romances were good either.

On the plus side, a lot of the gags involving the immortality itself were fun. Everyone believing Helen was dead for example made a lot of sense since she would literally have no pulse. Her deformed state was also quite realistic even if perhaps hard to look at. Helen using her own death as blackmail against Ernest was great too. He probably regretted having the skills needed to patch her back together.

Overall, Ernest definitely needed to man up a little more. If he had done that then he definitely wouldn’t have been caught in this circumstance. As it is, the guy gets manipulated rather easily. His only good moment might be when he managed to dodge the poisoned drink trick only to still get knocked out by a frying pan anyway. I wouldn’t say the film particularly clicked with me but it has enough gags where you should have some fun here. If you want a cautionary tale on immortality then you should definitely check this one out. The ending is also quite scary in a way too since it furthers that point immensely.