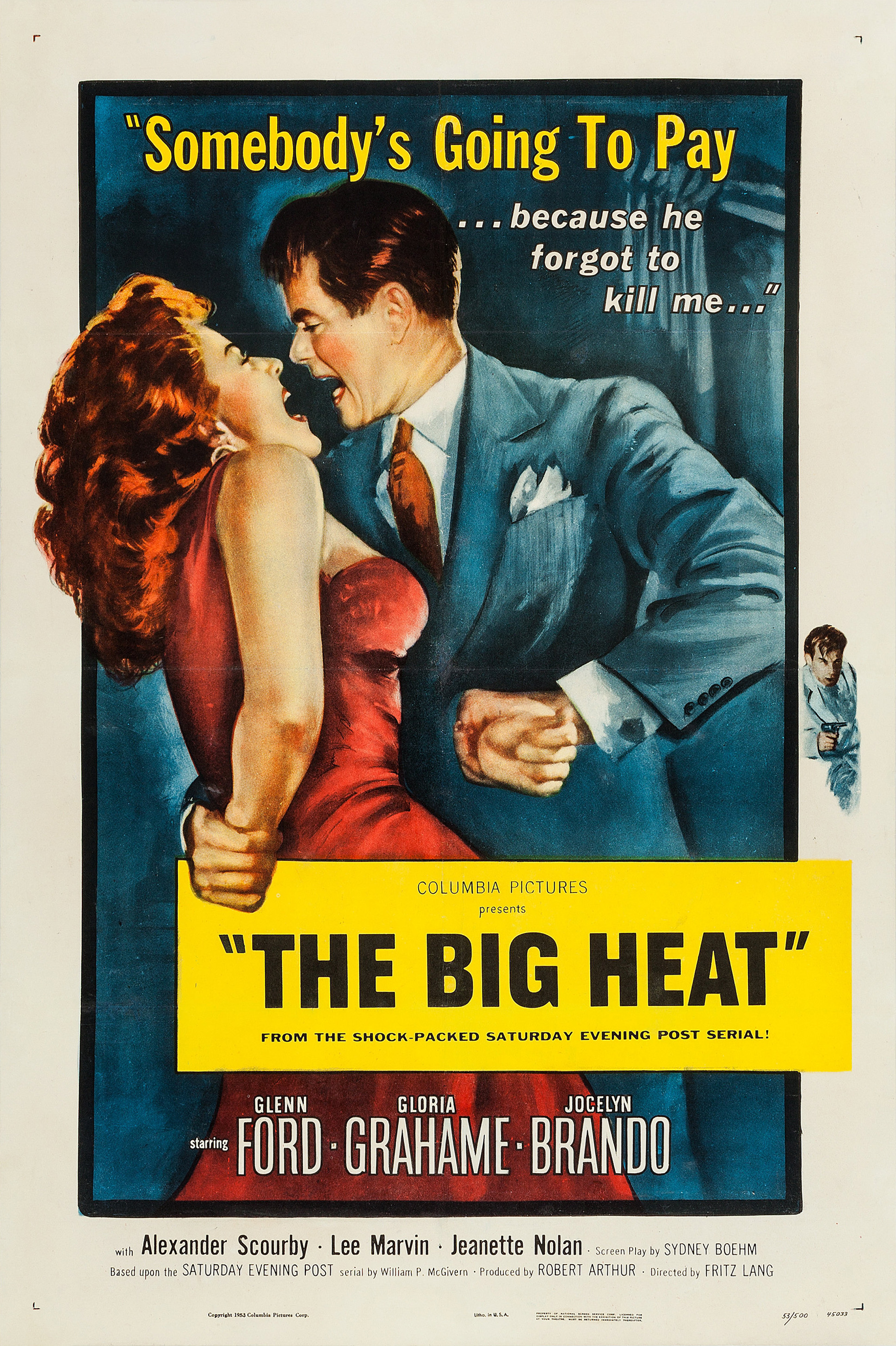 The Big Heat is definitely a true noir thriller through and through. There are a lot of mysteries for the main character to sift through and pretty much everyone is lying so it’s always hard to get to the heart of the matter. The film does a good job of keeping you engaged the whole way through. There are certainly a lot of tragic elements in the movie as well. Through it all, the lead is determined to keep on moving forward.

Dave is Sergeant who works in the homicide business. He’s always done a good job of solving each case and certainly isn’t the kind of guy who backs down. Well, this time he’s gotten himself involved in a very big case. A fellow cop committed suicide and while it initially appears to be a shut case, a lady named Lucy approaches Dave and gives him info to suggest that this wasn’t the case. He was having an affair with her at the time and had just planned to divorce Mrs. Duncan.

Mrs. Duncan doesn’t want to talk about this and then the top brass at the police tell Dave to stop bothering her. Some thugs even call his home and threaten Dave’s wife Katie. Well, now Dave knows that there is something to this case and he doesn’t intend to leave until he’s solved it all. This will be his most difficult case yet though as he will have to do it without the help of the police. Can he take on the powerful underworld?

There are quite a few characters running around here. First up we have the main villain Mike Lagana. He runs the underworld and seems to run the police as well. Naturally this is why Dave suspects him of having a hand on this. Supposedly no criminal acts without this guy giving his okay first. If they try to make a move solo then they may not end up being in a position to act any further. Mike makes for an intense villain to be sure. He’s the kind of guy who prefers to let his underlings do the dirty work though.

Mike tries to stay clean as a whistle but of course giving the orders doesn’t make you any less of a villain than the ones doing the deed. Then you have his right hand man Stone who is the most twisted of the villains. He’s into torture and such so you’re always ready for Dave to eventually take him down. There’s nothing redeeming about this villain.

Another big villain here is Mrs. Duncan. After all, she’s one of the mastermind’s here. As a side note, I also liked how this film had more than just the usual 2 factions. For example, she is working with Mike but not for him. In fact, she has contingency plans of her own. Mrs. Duncan is a great strategist and always makes sure to hold a great hand. It’s part of what makes the end of her plot really interesting.

The film takes a few different turns than I had expected and I thought it was played out excellently. A lot of times you expect Dave to basically be doing all of the work on his own without help but in this one that’s not quite the case. He has some allies and then you’ve also just got separate characters who have their own plans and agendas.

Back to the heroes, Dave’s wife Katie was a great character. She was certainly on top of things and was just good natured in general. She was someone he could always count on and she had a good sense of humor as well. Then you have Dave’s army friends who show up more in the second half. These guys are all ready to stand with him to the end which is a really good display of loyalty. Without them it would have been a lot more difficult for Dave to move around.

Then you have Debby who is Stone’s girlfriend so she is around for a lot of the villain scenes. It’s clear that she has more of a heart than the others but of course it’s not easy to just leave a villain setup. Once you’re in you are effectively stuck and have to remain that way. She does end up contributing a whole lot though. Debby goes through a lot during the movie but ultimately stays strong during the various trials.

As for Dave, he’s certainly a solid character. He takes his job very seriously and does whatever he can to crack the case. He’s not able to just look the other way which is difficult in this line of work since the town is basically owned by the villains. At one point the main villain is even playing a game of cards with some elected officials and a cop as they all sit down and have a good game while someone is being injured in the background. Dave can be short with just about everyone but he has good reason to be in a foul mood for most of the film.

Dave really can’t catch a break and as the main character you already know that the people he meets will always be in danger. He also succeeds as a main character with the great dialogue he gets. Dave always has a solid one liner ready for the various characters and doesn’t hold back with the insults. He just calls it like he sees it and doesn’t care who is listening.

The script is definitely top notch and holds up extremely well. The writing is on point as it balances the various plots. Again, I like how it threw a lot of curveballs into the climax of the film with each character getting to contribute. It made the film ultimately feel even more like a grand adventure.

If there’s anything weak about the film, it’s that it can go a bit far with being rather dark. In a noir film characters die all of the time which is normal but this one delves much more into the torture kind of deaths. The opening victim dies in a rather brutal way and we see how Stone treats various characters close up. The attack on Debby was also pretty brutal. I prefer when the villains just murder the heroes quick and easy as opposed to going the extra mile. At least with the first death it isn’t shown but a quick explosion would have definitely been preferable.

Overall, The Big Heat is a really good thriller film. It’s easy to get invested into the story and also hard to predict exactly how it will go. Even the fact that we know who the crime lord is makes things pretty interesting since that doesn’t necessarily mean he has his hand in this affair. Also, you have to decide whether you believe Dave or not when he talks about all of the characters being bought out by the guy. If you like a good mystery or thriller then this is definitely a good title to check out.

2 thoughts on “The Big Heat Review”