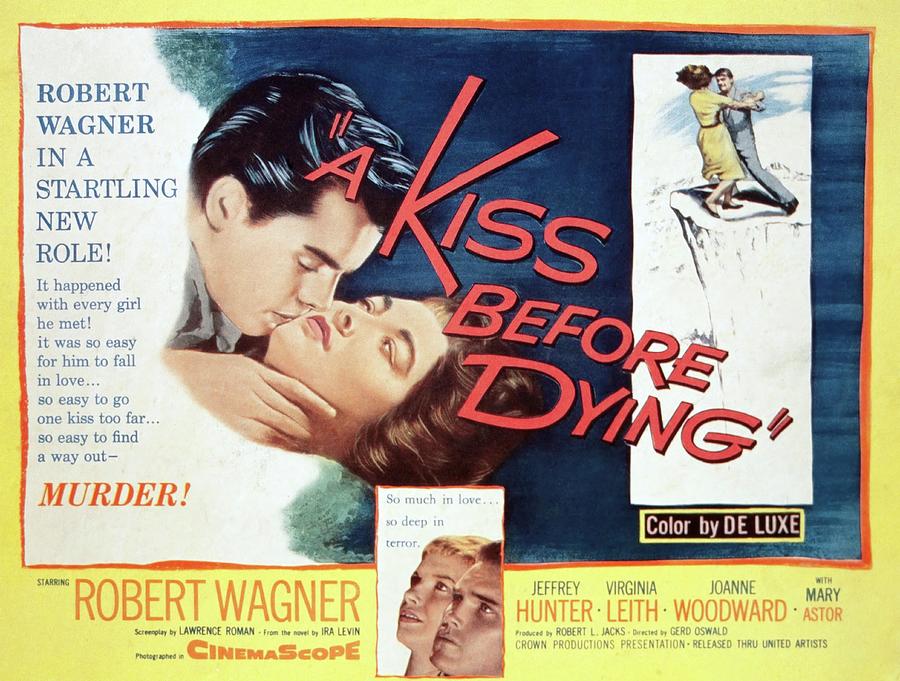 Whenever you have a film trying to cross over some romance and horror you know that it’s a tricky mix to pull off. Both genres are already tough enough as it is and this movie definitely couldn’t defy the odds. You’re just waiting for the characters to solve the mystery and end things already but clearly it won’t be quite so easy.

The movie starts off by introducing us to Bud and Dorothy. They’re a couple who are seemingly getting along well but one day Dorothy finds out that she is pregnant. Naturally this was not exactly planned and Bud is now worried about his future prospects. He decides that he’s going to need to bump her off to get himself out of this. He’ll have to do it subtly though or people will suspect that something’s up. He ends up throwing her off a building. While the police believe this may have been a suicide, Dorothy’s sister Ellen isn’t convinced. She gets a local police assistant named Gordon to help her out with this. Can they reach the truth?

I hesitate to even put in the part about Bud taking out Dorothy but that is really the main plot even if it takes a rather long time for that plot to end. There’s a ton of build up to it first as the film milks each scene. I guess the intent is so you can think that maybe Dorothy has a shot at escaping but that never seemed very likely so I don’t know about that one. It does mean that the first half feels really long though and tends to drag on.

Perhaps if there was some reason the film gave us on why Dorothy might escape then you would be able to enjoy this as a rather thrilling moment. Thing is, we know Bud will be able to take her out so then instead of tension you’re just waiting for the film to get on with it and go to the next scene already.

Bud’s definitely one of those guys you’re not meant to sympathize with or even find interesting as a villain. He’s always running around scared and hoping that he’s in the right place at the right time. The film really makes sure to double down on this as he’s even extremely rude to his mother the whole time. Nobody notices what a guy he is though so unfortunately he lasts for quite a while as everyone cheers him on for being a rather intelligent guy who is very studious.

As for Dorothy, she was a good character but definitely not quick on the uptake. Bud wasn’t exactly subtle at his displeasure of her getting pregnant. By the time he would put on his happy face it should have been way too late. She somehow didn’t notice when he pushed her down a flight of stairs as well. The guy’s just way too suspicious throughout the movie but I suppose in a way she just wanted everything to work out. You can sympathize with her a lot to be sure though. You really wanted her to have some kind of happy ending.

Then you have Ellen who is a very proactive character. It is cool to see her do some detective work of her own. Her first adventure almost backfired but at least she is trying to find clues and everything which is a big step up from doing nothing. Now, she does start to slip a whole lot towards the end of the film though. Refusing to listen to new developments and such is a bad look. I can understand if it was only Mr. Kingship but when the cops show up with this info as well you should probably listen.

It was a little disappointed that she then drove up with Bud to a rather abandoned area without bringing a handgun or something. It’s why you certainly can’t let romance blind you or that’ll put you in some sticky situations for sure. It’s part of why Gordon was good since he clearly liked Ellen but at the end of the day his job came first. Even if it meant she wouldn’t be his friend anymore, he had to pursue the case. He also managed to pursue it rather well. He isn’t a full fledged cop yet but you can tell that he will have the skills to make it.

Certainly more skills than the DJ. The problem with that guy is one I have with many characters in a hold up situation. Okay, put it this way, Bud has already said he’s going to murder the guy. It’s quite clear that the DJ isn’t leaving the room alive. In light of that, why not at least make a try for the gun or something? This guy is trying to play this up as a suicide which only works if the DJ sits on the chair real quiet like and allows himself to be shot in a way that is easy to fake.

If he struggles, wrestles with Bud or gets shot as he runs, it’ll be very obvious that it is not a suicide. Effectively you’re calling the killer’s bluff. Still, there is a good chance you’ll die but isn’t it better to take a chance then go for the 0% survival rate of just sitting there and taking it? The DJ was massively disappointing there. I’ll never understand why a characters just accepts his death in such a situation.

Finally, Mr. Kingship was a good character as well. There’s a lot of tension between him and Ellen. From what we see of him in the film he’s definitely a nice enough character but clearly prior to the film’s start he could be a little controlling. We can only really judge on what’s going on now though so I thought he was fairly supportive and did his best.

Overall, I wasn’t really a fan of this film. It certainly comes off as quite a bit mean spirited with almost a third of the film being devoted to scenes building up the main heroine’s death when we know she has no chance of escaping. Bud managing to hook up with her own sister was also quite sketchy and just kept the drama going. It’s rather convenient that Bud got away with so much or that nobody knew he had been going out with her. It’s a small town so I don’t care how secret they were about it, it should have come out during the initial investigation. As Bud’s such an unlikable character having him as the main protagonist for so long also didn’t help matters. You’re just waiting for him to eventually go down which ultimately makes the pacing feel slow as well. If you want to check out a thriller, this definitely isn’t the one to pick.

2 thoughts on “A Kiss Before Dying Review”