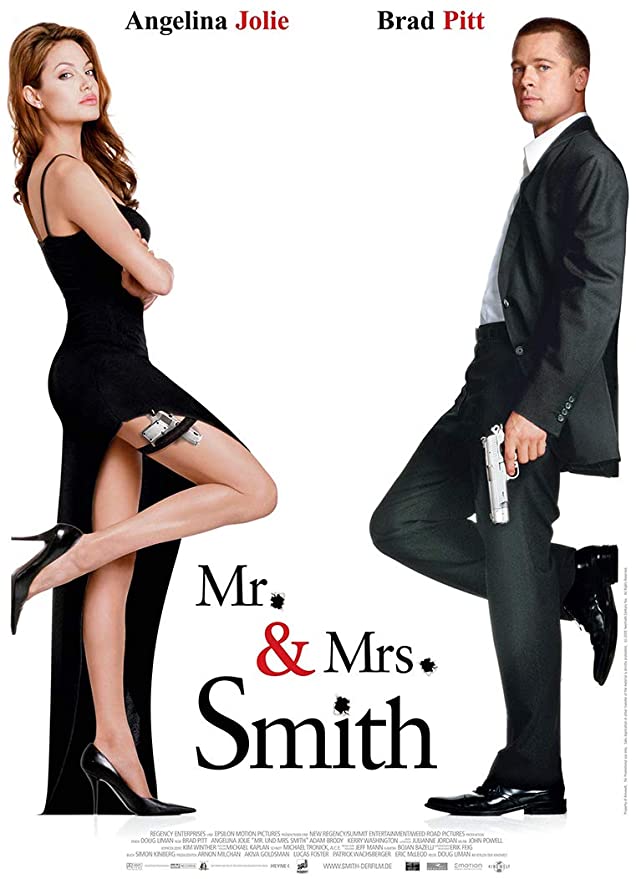 Mr. and Mrs. Smith is one of those films that has a great premise and is followed by really solid execution. The idea of both characters being special agents and not knowing about the other just makes for a fun dynamic. It’s not one that is really explored all that often either so it’s a really fresh idea. I’d definitely be up for a sequel to this someday.

The movie starts with both characters trying to get their relationship back to normal after things have gone south. Their relationship coach asks a lot of questions but the characters are clearly having a tough time of it. We then cut back to the origin of how the two met each other. Fittingly enough, it’s during a big fire fight and they use each other as alibis. Presumably both of them probably had some role in the festivities. They got married real quick and that should have been their happily ever after but things have soured.

At least one of them is always away from home and their excuses aren’t the greatest. The reason for this of course is that both of them work as hitmen for big organizations. Mr. Smith is sort of like James Bond working for M16 and Mrs. Smith is the highest ranking agent of a Charlie’s Angels task force. Both of them terminate all their targets and have earned solid reputations. If someone is causing you trouble then you call their organizations in.

Well, things take a turn when they are both sent after the same target. Who will be able to complete the mission? Additionally, both Smiths keep growing more and more suspicious of each other so a mission like this is naturally going to have everything bubble to the surface. There’s a lot of quality tension there to be sure and the film is fairly long. This works to its benefit since it means that there is enough time to really work this plot over.

There’s a lot of positives here from the witty dialogue to the special effects and action scenes. A film like this wouldn’t be able to work if the writing was bad. You need to have quality interactions between the characters and we get that here. A lot of bluffs are thrown out and both of them get pretty serious about trying to take the other down at some points as well.

There is an interesting difference to their approaches though. Mr. Smith is constantly holding back and trying to take Mrs. Smith down without seriously hurting her. Mrs. Smith on the other hand has no such qualms and outright tries to murder him several times. It’s very interesting to look at because it does show their different styles. At the end of the day Mrs. Smith was willing to put her job above Mr. Smith while he was unable to do the same against her.

In the end I would say that’s part of why I preferred him as a character. Even if he’s not always great at showing it, he was consistent in putting his wife first. I don’t think there was any point where he really wavered in that. Mrs. Smith had more questionable scenes in that respect. You could say at one point with the guns they came close to taking each other out in a mutual sense although at that point things had already been escalated a whole lot.

Both of them had fun ways of storing their weapons inside the house as well. It’s too bad a lot of the weapons had to be destroyed by the end. A lot of the film deals with the mental game of chess between the two characters but we do get some solid action segments like the gun fight I just mentioned and the climax in general. There’s a lot going on here and while it’s a more light hearted adventure, you can still expect some plot twists as well.

Each character even has their own supporting cast even if they were a lot weaker than the main two. Eddie is Mr. Smith’s friend and the guy has some really fun moments. On the other hand he has some moments that drag on too and it’s clear that he’s not the greatest friend. Now would he put his job over Mr. Smith? Absolutely without a doubt, just in this case the money wasn’t all that high. Then for Mrs. Smith, none of her allies get as much screen time as Eddie but presumably they can fight pretty well too. They just don’t really get the chance to do it.

The best confrontation between the main two is likely the dinner scene as they try to gather data. There’s a lot of suspense since they really don’t know what’s about to happen. We even get a second of complete silence when the wine glass almost hits the floor. All of their confrontations are great but that one certainly stands out.

Of course while I said I prefer Mr. Smith, Mrs. Smith is still a solid character as well. She’s clearly prepped pretty well when it comes to fighting. Against anyone other than Mr. Smith you figure that she would probably have the edge. She hasn’t had any trouble before now after all and has vanquished enough targets to be considered the top officer in her field. Her style may be a lot more rigid than Mr. Smith’s play it by ear approach but it gets the job done.

If the film has any weaknesses it’s that of course in Mrs. Smith’s only solo mission at the beginning of the film she is using seductive tricks to take out the villain. I’d rather she just showed up guns blazing since it seems like this always happens to every heroine agent who shows up in the field. The film does have some fanservice here and there although it’s nothing too crazy. I would also say the interviews at the beginning and ending of the film were not quite as interesting as the rest. It’s there to really give the film a beginning and ending of course but I’d say there are other ways the movie could have done that.

I don’t really have any other negatives though because this is just a really solid all around movie. It’s hard to say what would be the primary genre between comedy, action, and thriller because it really tackles all 3 quite well. When the film wants to get serious it gets very serious but then you have the great cutaways where the film suddenly gets light hearted and it works very well. A good example of this is when the two main characters show up at their neighbor’s party right after completing life or death assignments on their end. It’s a great contrast. The movie’s style of humor is definitely very effective.

Overall, Mr. & Mrs. Smith is a fun film. The dynamic works really well especially when you consider that neither one of them are exactly heroes. If they were then there wouldn’t really be that sense of danger between them, it’s because they are vigilante hitmen working for shady organizations that you have to ask yourself if the other one is in danger after a point. The film really makes the most out of the premise but a sequel could still be a lot of fun just because it’s one of those ideas that you can absolutely pull off a few more times. As long as the writing stays solid then the rest will follow.