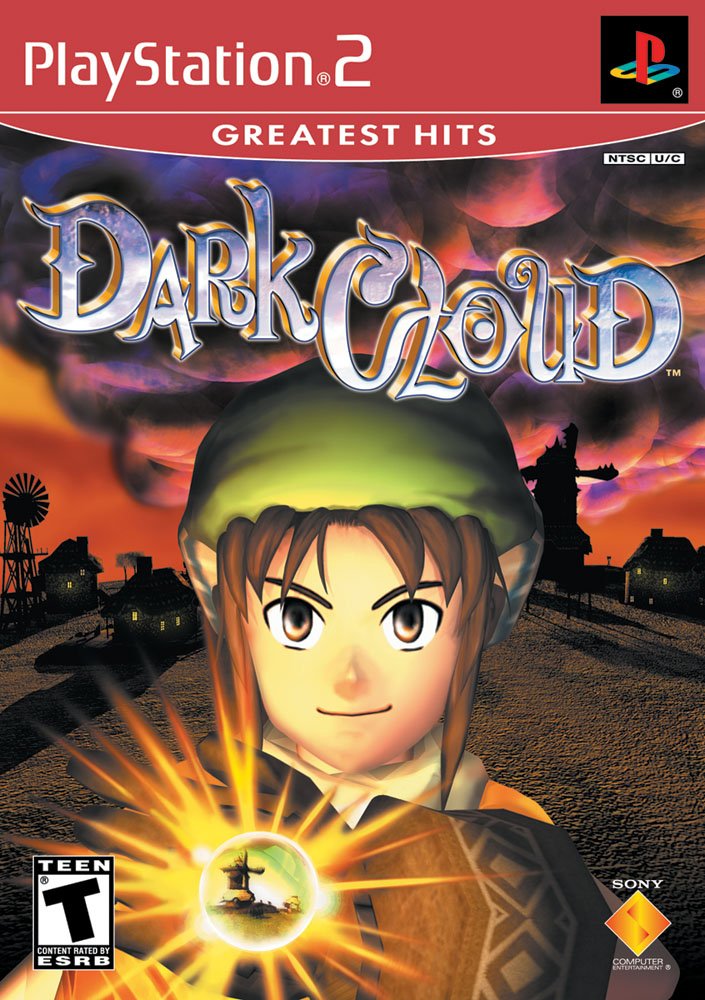 Dark Cloud is one of those games I’ve had on the backburner for many years now. It’s just always around but never made it to the top of the pile. Well, with less than 20 games left to get through it makes sense that it would finally step up to the plate. It’s a very intricate RPG that will take some getting used to but it is crafted rather well. The weapons breaking mechanic was also a lot better than I dared hope.

The basic plot of the game is that a Dark Genie has awoken and intends to eradicate humanity. Toan, our brave hero steps up to the plate….but doesn’t make it in time. Humanity has been destroyed and the planet is an empty wasteland. The only survive is a mysterious old man who tells Toan that he will help the lad save the world. See, the people aren’t dead but merely trapped in capsules outside of time. Toan will need to free them all while finding some way to stop the genie. He can’t possibly do it on his own so he’s going to need help.

For the gameplay, this is a 3D hack and slash. Think of it similar to .Hack where you run around in dungeons and take out the monsters. Some characters have projectile type weapons which are fun to use but for the vast majority of the game I used Toan’s classic sword. Part of the reason for this is you can only really work on powering up one weapon at a time. So naturally I focused on his since he’s always around.

That said, it did come back to bite me during the final boss since you can’t use Toan for a whole section of the fight. You have to switch to a projectile user and both of mine were extremely weak. I spent a few hours grinding up the cat girl to a level where she could fight and then the rest of the boss was pretty easy. Still, it was a tense moment so to avoid that you will want to spread your attention between two characters for a while. Make sure you have a strong ranged fighter as well as a close quarters combat user.

The final boss is also intense just because his attacks can’t be dodged. Yes you heard that right. His clap attack releases a sonic wave that is impossible to dodge or block. Your only options are to eat the attack and use a health item right after or use a stamina drink which gives you temporary invincibility. If you do that then you should be just fine.

The rest of the game isn’t nearly as difficult which is why the final boss took me by surprise. Let me get back to the gameplay though, there’s a lot to unpack here. So every time you use your weapon, part of its stamina goes down. If it hits 0 then the weapon breaks and you lose every upgrade you’ve ever put into it. To stop this, always carry an auto repair in your quick item inventory. It’s expensive but if you ever forget to heal a weapon in time this will ensure that it isn’t completely shattered.

There’s also a water mechanic here so you will die of thirst if you don’t drink enough water. It’s a good reminder to go and grab some water irl too of course. At first this will be a little tedious since they get thirsty very quickly so make sure to find as many water upgrades as possible. These are scattered around town and usually pop up after you help out a villager.

The formula for the game is pretty straight forward. You enter a dungeon and complete all of the floors you can. After a while you will be stopped which is when you need to build the village. It’s pretty easy to build but hard to make all of the villagers happy. I wasn’t able to get 100% satisfaction in any area but you don’t really need to do that in order to get the items you need. The only tricky one is the robot on the moon. I was building him upside down which got tricky.

The game explains everything pretty well though so even though it sounds like a lot of mechanics to keep track of, you’ll get the hang of it pretty quickly. It certainly does take a while so the game is around 30 hours as it promises. It took me a little over 28 so that was right up there next to the estimate. The sequel is apparently over 50 hours which sounds insane to me. I wonder how many dungeons are in that game.

There is some replay value here as well. Apparently there is a bonus world at the end which you can try to beat. I imagine that world must be super tough. You can also go back to all of the old villages to try and make the villagers happy which will get you some good items and equipment. So all in all there is definitely a lot to do here.

If I have any real issues with the game it can be that the game can become almost too formulaic without throwing in any wrinkles. For example, the first world has a cool boss fight as Seda showed up and the story started to get intense. Then there are almost no truly relevant story cutscenes with him or the Dark Genie until we approach the final world. I have to admit that I was expecting them to have more of a focus. It’s almost like the story itself went on break for around 20 hours during the game. You still do get cutscenes, but nothing big for a while.

Also, the dungeon exploring can be a bit repetitive. You will need to cross around 100 floors in order to get to the end of the game and each floor is fundamentally the same. You beat a bunch of enemies and then get to head out. I enjoy the gameplay so it wasn’t that bad but if the sequel is double the length because they doubled the floors…that could get painful.

Overall, Dark Cloud is a pretty good RPG. I’m glad that you at least have the opportunity to keep your weapons from ever breaking. That mechanic could have easily gone sideways otherwise. As it stands, I was pretty cool with it. I definitely would have liked to have had more of a focus on the story though. For smaller items I would remove the water mechanic and special levels where you are forced to play as 1 character too. A lot of thought was put into this title though and it shows. If you like RPGs, particularly dungeon crawlers then you should enjoy this one quite a bit.