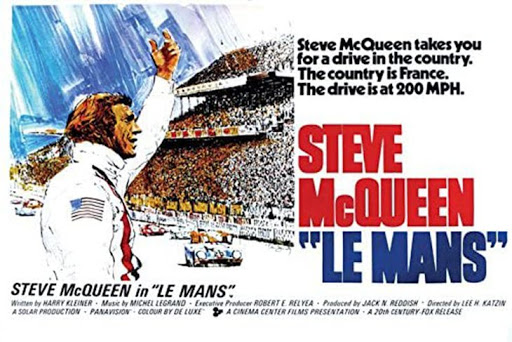 Le Mans is probably the closest I’ve seen to a film not really having much of a story since Cats. Fortunately unlike that film this one was still fun mainly because in general you can’t go wrong with racing. The film does have some issues with all the characters looking the same and that feeling like nothing is happening, but as long as you enjoy watching the cars go at it you should be fine.

The film starts with Michael getting ready for the big Le Mans race. It’s effectively a huge cross country race that spans an incredible amount of distance. It’s so long that the drivers even substitute out with others as the car goes on. I don’t know the specific rules here and the film isn’t about to tell them to you but effectively it seems like anyone can substitute for you as long as they have permission from the coach. Naturally it shouldn’t come to that since they already have the different guys lined up. Michael wants to win this but can he pull it off?

Meanwhile he has to deal with some drama involving the past. See, Lisa’s husband was in the last Le Mans and he ended up dying. It seems like she partially thinks Michael is responsible but more than anything she just doesn’t like racing anymore. We are given a flashback involving the crash briefly but when seeing it, it’s fair to say that it’s not really Michael’s fault. In fact, throughout the film we have quite a few crashes and it’s always tough because while you may spin out of control to dodge the first car, is it the first car’s fault?

It’s all relative when you’re out on the track. Nobody wants to crash after all and I can tell you up front that there isn’t some kind of big antagonist trying to take everyone out for the count. These are all professionals that are just trying to take the win but this isn’t exactly an easy track. Even the simplest of turns can become challenging when you’re going at such a high speed. You can’t slow down or you’ll fall behind as well.

Now, you could say that Lisa’s plot is the main story here. Part of the film is helping her see that maybe racing isn’t so bad. The plot could have been done a little better though as the scenes are spread out across the whole movie so there isn’t much to them. Part of her despises the races but she can’t help but keep showing up anyway. They just draw her in even as she tries to resist. All of the drivers seem to like her as well but you know that Michael’s the only one who may have a shot and even then you’re hoping that she friend zones them all considering that her husband didn’t die all that long ago. It was the last grand prix which I assume was a year ago unless this competition is held every 4 years or something like that.

It’s just not a super engaging plot but at least it does give us a chance for some dialogue and a change of pace. The rest of the film is really just the grand prix with a lot of different camera angles to keep things fresh. I always thought one of the most stressful moments in these things has to be when you have to go into the pit stop and let the crew maintain the car. Even if everyone has to do it at some point, it can be rough seeing the other cars getting out ahead of you.

There isn’t much to say about the soundtrack because I wouldn’t say there’s much of one here. The effects look good though, the movie shows how fragile the cars are. After all they’re built for speed so one wrong bump and that’s really it for the machine. It’s totaled before you can even give it a glance.

So Le Mans is a rather unique film I would say. Sure, it doesn’t have an interesting story compared to Speed Racer, Fast and the Furious, or even Need for Speed, but at the same time it’s a fairly safe film. Since pretty much the whole film is just a race, there isn’t any time to fall into any cinematic pot holes. The only negative that the film could even risk would be if it got downright boring. After all if you’re not really into cars or just moderately into them then you may get bored of seeing them turn the corner over and over again. That’s the only risk it takes, but since I enjoy a good race I wouldn’t say that’s the case here. I wouldn’t call the film boring, I would say it’s a little dragged out and could have benefited from a shorter run time but I was engaged enough to want to see it to the end.

Ironically as it’s built around being a real race that means it isn’t nearly as exciting to watch as virtually any other racing film since those (despite having slower, more traditional cars) feel like they have a lot more energy and substance. I think if I saw this in theaters I would be a lot more disappointed but watching it now, it just sort of flows by. I don’t imagine it’ll leave an impression after a while but it’s a consistent film and I’d say that’s enough to keep it at a positive level.

Overall, Le Mans is a film that makes no real mistakes but you do wish it could have added more of a plot. Sure, you have some rivals in the race, a small subplot with a guy hoping to win one last race before he retires, etc. At the same time you still don’t feel like there’s much of a story here which is in itself a bit of an experimental technique I suppose. I wouldn’t want this to become the standard but it’s a decently good film that does deliver on showing you the cars. Pick whichever car you want and root for it to go all the way!