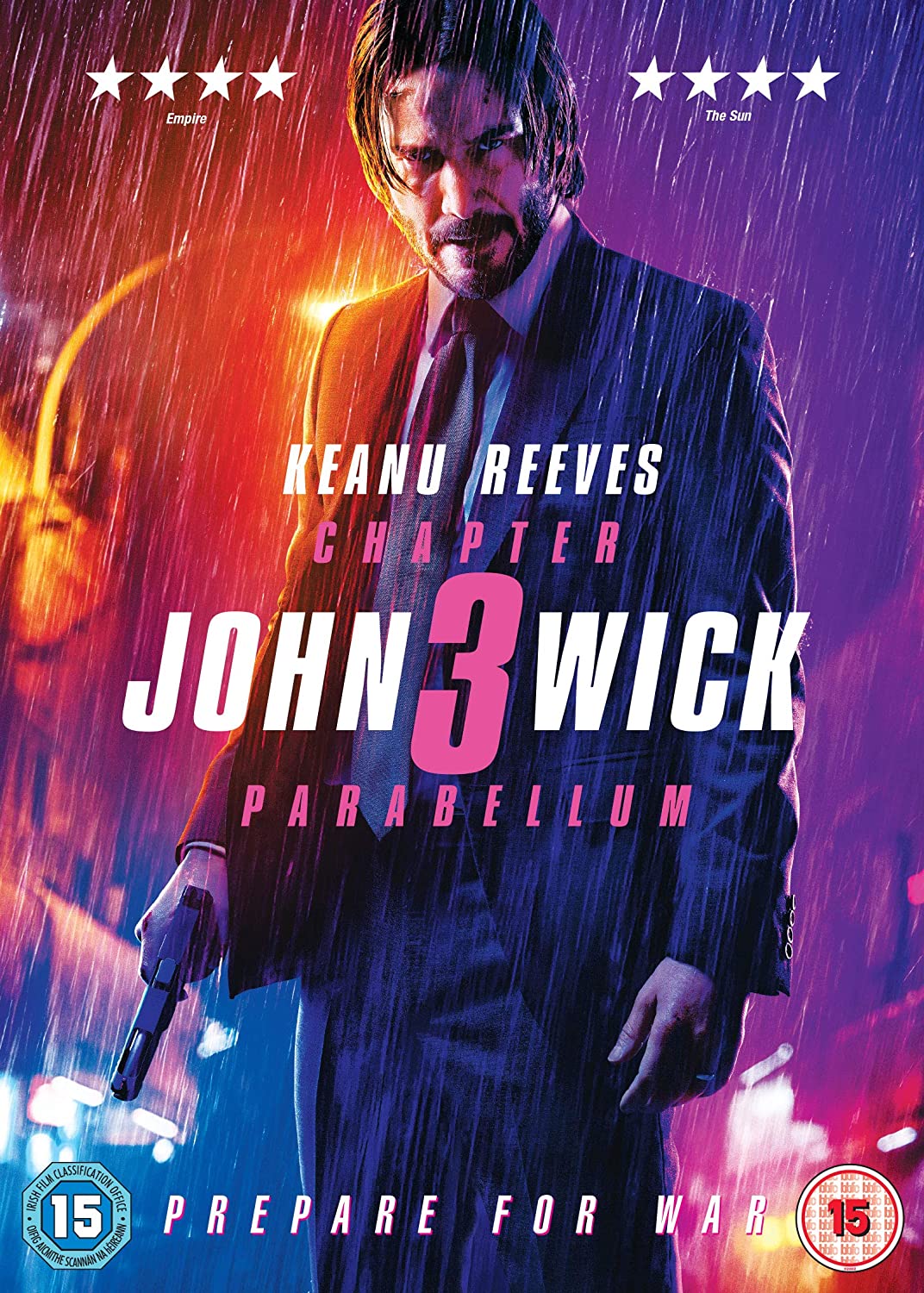 Wick returns for another big adventure. The second film had a terrific cliffhanger to lead up to this one and the third film makes sure to capitalize on the concept and even throw in another cliffhanger. Ultimately I would say the 2nd film is still the definitive one because it really got to go all out with Wick taking on all challengers. This one is pretty close though.

So last time a bounty was put on Wick’s head since he ended up taking someone out while at the Continental hotel which is against the rules set by the high table. Now he has to try and survive while the entire planet is after him. The bounty on his head is also rather high so he doesn’t have many people to turn too. He’ll have to try and get the high table to remove the bounty and the only way to get an ally is to use his once in a lifetime contract coin.

Let’s talk about some aspects where the film actually even beast film 2 but also the reasons why it lost. For starters, I would say the fights may have even passed film two’s. It’s close but the highs of this film have to be the best with the ninja fights. Wick taking on the ninja masters at the end was very impressive and made for a lot of hype moments. The fact that the ninjas actually defeated him a few times was also very impressive. It showed that they were above the usual thugs.

The main ninja was also a terrific opponent. He was a fun character as well. Wick certainly hasn’t lost a step that’s for sure and he may very well be the most impressive human fighter in this kind of film. It’s hard to see almost anyone stopping him. At this point John is already very weakened and yet he’s still going around taking out all challengers.

That ties into the aspect that’s weaker than the second film though. We get a lot more non Wick scenes as well. There’s the new heroine who gets to fight, we have ninjas taking out all of the other big factions, and the whole time you’re just waiting to see Wick fight again. The whole desert side quest felt like it was a break from the usual setting of Wick being in New York and taking everyone down.

John Wick 3’s best scenes are at the very beginning as we close up the cliffhanger from the second film and the very ending as he fights off waves of opponents from the table and the ninja. So it’s the middle that feels like it’s more fluff than anything and could have been condensed a bit. It’s a change of scenery but when your backdrop is New York you never really need to leave. Those scenes always look quite incredible with the special effects and atmosphere.

There’s not a whole lot to say about John Wick that I haven’t already gone into during the first two films. He’s a great lead who gets the job done and has a lot of good character development. He goes through a lot and just never goes down. The guy’s resolve is really something else.

Sofia is one of the new characters introduced in the film but I definitely didn’t like her. Her final scene involving a water bottle is just so petty and disgusting. I feel like Wick should have just stolen her truck right then and there. She can fight well and gets some extended fights with her dogs. The film got into some rather dangerous territory by having the dogs around but this time at least the film didn’t make a big mistake. The dog getting shot was still pretty bad but at least he lived and was able to get up and fight afterwards with the jacket.

Wick telling Sofia not to murder the guy was pretty bad advice though considering the entire plot of the first film. Additionally, we then get a long action sequence where they literally murder every minion on the base. At that point you may as well murder the leader too right? Why should he be the only one to survive this ordeal? Either way I’d rather Sofia not return in the sequel but if she does, I’d say Wick will be ready for her. Part of why I hope she doesn’t return is because it’s all too risky as long as she owns those dogs. I don’t want to take a chance on any of them getting injured and if they’re fighting Wick to the death that’ll be tricky. Additionally while their fights are very different, I did not enjoy them nearly as much as the human fights. It’s all portrayed extremely violently as they bite the enemies where it hurts. It’s an effective strategy sure but instead of being hype it makes the fights rather hard to look at.

Winston gets a pretty big role here as the owner of the hotel. He gets to look rather tough the whole time even if he talks a great game despite not actually doing much of anything. The guy definitely likes to stay in the shadows and command from there. Charon is also a really fun character as always. He has a good dynamic with Wick that’s for sure and he actually goes into the field to fight which also raises his character in my eyes.

The Bowery King returns from the last film and he’s still got a lot of confidence here. Perhaps he should have prepared himself more for the fight with the High Table but I guess a King’s folly is often his overconfidence. There’s also a Russian group that shows up here who have a role to play. This film really shows off just how many different villain groups are operating in New York.

Part of the plot here is that the High Table is finally stepping in since there’s so much chaos going on. At the very least you have to say that they’re quite bold since they pick fights with every single faction in the film. Naturally all of these guys try to fight back but they have a group of ninjas led by Zero who are ready for anything. The ninja make short work out of all the groups which is also impressive.

The Adjudicator sent out to make the warnings doesn’t seem like she can fight a whole lot though. You’d think that her confidence would be her downfall but nobody ever bothers actually trying to shoot her which is very fortunate for her safety. The high table makes for a pretty interesting villain so we’ll see how that goes. It’s definitely a dynamic I haven’t seen in a long time where a villain group suddenly shows up cleaning the board of heroes and villains alike.

Zero also has to be the best main villain in the series. He gets a lot of fun dialogue during his battle with Wick. While the guy seems to like Wick as a good rival, the feeling isn’t mutual. It’s hard to blame Wick for being cold though since the guy is actively trying to murder him. Wick had more fun fighting the guy’s two subordinates, perhaps because they really fought cleanly from the start. The whole climax in the mirror world was pretty exciting.

As always the Wick films contain as much violence as they do action though. The characters go down in rather painful ways and the High Table introduces some punishment for most of the characters as well. Characters are forced to lose limbs in service to the high table or get slashed to bits. The poor henchmen don’t stand a chance against the ninja’s blades and of course Wick isn’t holding back either. The body count is massive and the series still has a much more realistic vibe than most so it’s not like this is stylized to avoid the blood.

The fight choreography is still incredibly impressive down to the fact that Wick has to reload his guns and plan things out accordingly. Each fight really holds up. Still, you’ll need a good stomach for violence in these fights. One character goes down rather painfully to a book, but that’s why you shouldn’t try to bend the rules.

The music is quite fun as always. There are a lot of really solid themes throughout the movie that help you feel the intensity of the moment. Again, you really can’t top the opening scene. I wouldn’t say that rain is always good to have around but it’s perfect for tense scenes like the opening where Wick is trying to get away from all of the possible hitmen. Any and everyone can be against him after all so it’s not easy to stay safe. I wouldn’t have minded if that was really the whole film either.

Of course the ending does leave a lot of interesting room for the sequel. I would say some characters definitely made a mistake with how they handled things and Wick is definitely going to make them regret it. 3 films in and people still insist on challenging the guy. I guess some characters never learn.

Overall, John Wick 3 definitely continues the series by reinforcing what everyone likes about it so much. It’s certainly a very interesting journey with a lot of good writing and intense action. It would be so perfect if they could just tone down the violence. You could certainly do that even while keeping the fights realistic by changing camera angles or stylizing things a bit. Hopefully the series continues with having hype cliffhangers at the end because these really hold up in getting you psyched to see what happens next.