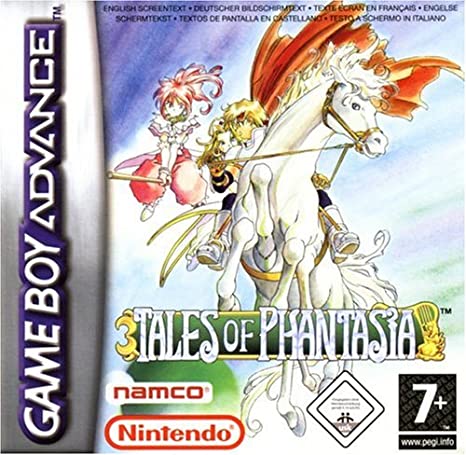 I haven’t played a lot of Tales of titles yet but I’m working on it. Over the last year or two I played the two Symphonias and Legendia. Now with Phantasia I’m one step closer to getting the full Tales experience. This one’s definitely a lot of fun and feels old in all the right ways. The turn based combat is simple yet effective. Now, I would still have to put it under both Symphonia titles but I dare say this one actually does beat Legendia.

The game follows a guy named Cress who has to go through a rather sad origin story as all Tales of characters do. Cress’ village is attacked by an evil mastermind who murders his family as well as his best friend Chester’s family. The whole village is burned to the ground and the main characters want vengeance. This won’t be quite so easy though. For starters, this is a battle that has been going on for generations. The villain is reviving an evil threat from 1000 years ago, Dhaos. Dhaos has mastery over time and space. The heroes will need to find a way to traverse time as well or they will ultimately be left behind to continue holding those Ls. Let me tell you, the Ls weigh a whole lot after a while.

For the gameplay, it’s not strictly speaking turn based combat. You do take turns when using spells but otherwise you can all move at the same time. The game is in 2D which is an interesting twist since you have to cram all of the characters together as you attack the villains. Since it’s not as close to 3D as the others, it can get a little tricky at times with your A.I. partners getting in the way. The game seems to intentionally get these guys to sabotage you as they’ll use the worst possible spells against the bosses.

No worries though you can keep pausing the game to give them manual commands. It’s a little extra work but it is worth it most of the time. You can see the areas where the series was still finding its footing with the gameplay mechanics. The game has to freeze whenever someone uses a spell which is pretty much every few seconds so that extends the length of each battle. That’s something future games stopped doing which is for the best.

So those are the weak points of the gameplay but the positives definitely outweigh those. For starters it’s always fun to learn new spells and try them out. The EXP system is very straightforward and the level ups make a difference. The most crucial part of the game is making sure you have the right equipment though. You want the pendent that cuts the spell time in half. It’s the most valuable item in the game by far and it would have been difficult to beat some of the bosses without it. You can effectively spam magical spells at your opponent which is incredibly handy.

As for the graphics, it looks pretty good. Some of the sprites may not be as descriptive as in other games like the Mana titles but you can still tell what is going on. The character illustrations may look a little different than the sprites but that’s hard to get around. The game does like to show off its graphics at times though like with the cutscene where we blow up a lot of monsters. That was definitely impressive.

As for the soundtrack, it’s a little less memorable than some of the others but the final boss theme is definitely fun. I liked the castle in general and the game does have a lot of energy. This one uses a style where the music will completely cut out a lot of the time. That’s something that I think the game should have changed. The situation getting dramatically quiet can be effective but not when you use it constantly. Then it doesn’t quite work.

If you like time travel then you will definitely enjoy the story quite a lot. As with most RPGs the story is very satisfying and a lot happens. Jumping from the past to the future is always fun and there are a lot of moments where it seems like the game is ending and then you jump back into it. Additionally The campaign took me close to 30 hours and after that there is still a lot of replay value to be had. You can try to complete side quests, get more level ups, and things like that. I don’t know of any significant post game though so it’s not quite as much of a post game as many RPGs. Still, with the base game being so long you shouldn’t have any issues there.

As a main character Cress is pretty reasonable. He’s a nice guy who does what he can to save the world. He may have a little less character than some of the other big RPG heroes but I wouldn’t say he has any real faults. Chester makes for a good friend but he misses out on a considerable portion of the game. By the time he rejoins the party you may not feel like putting him back in the rotation since your team is already set.

Mint also tends to miss a lot of the game. Unlike Chester she is around the whole time but doesn’t get to talk a lot. She’s a nice enough mage though. Claus gets more and more broken as the game goes on since he is able to summon all of the elemental spirits in the game. A large chunk of the adventure is supplying him with these creatures so he can fight off anyone who gets in his way. Then you have Arche who is a spell expert and can deal out a ton of damage. In most battles you just need her and Claus to take out the enemies since the other characters can barely even contribute in comparison. Arche has a lot of fun trolling the cast which is always good for the dynamic.

Finally you have the villain Dhaos. At times it’s hard to say if the game was really trying to make him sympathetic or not. Either way I wouldn’t say it succeeded as we needed to see more about his goal. No matter how he may have acted at the very end, it’s hard to get the feeling that this guy was ever in it for anything but himself. He makes for a great villain, no doubt about that. I just wouldn’t consider him anything but a full fledged villain.

Overall, Tales of Phantasia is another great RPG to add to the pile. It’s easy to see how this would help kickstart the Tales of series into becoming the huge title that it is today. I’m not sure when I’ll be checking out my next Tales of title but there are certainly a lot of other options to choose from. If you want to check out a very retro version of the franchise this is the one to pick up.