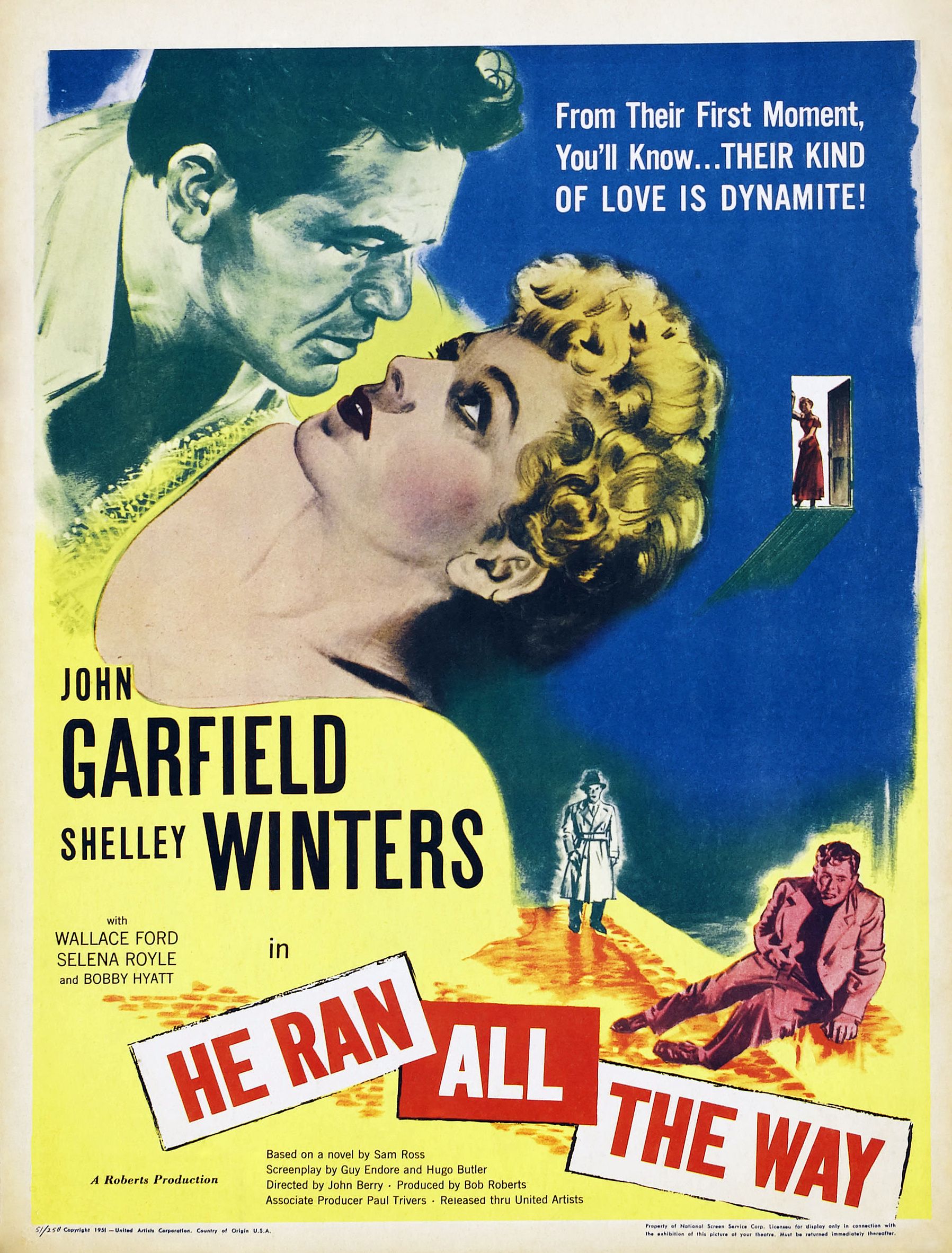 He Ran All The Way here takes a unique perspective with the main character where right off the gate you’re shown that he’s not a good person. It’s clear that he’s the antagonist yet this is so rare that you may put that to one side for a little while. As the film goes on he continues to get more and more unhinged though until you know there’s really no hope for this guy turning over a new leaf.

The movie starts with Nick yelling after oversleeping again and in general being a slob. He’s been dreading this day for a while as he and his partners are going to rob someone again for big bucks. Things go sideways though and he ends up leaving his partner for dead and murdering a police officer. Now the whole city is after him. He convinces a girl named Peg to invite him to her home and then takes her family (Parents, plus little brother) hostage. He doesn’t want anyone to leave until he’s convinced that the coast is clear. Can the family manage to get out of this one?

It’s pretty clear in the movie that Nick is absolutely insane. He’s paranoid that everyone is out to get him and is always flying off the handle. Now if you get past the yelling from the opening scene you might be able to trick yourself into thinking that he’s a decent guy who got mixed up with a bad crowd for a while. This doesn’t track with how he starts acting towards Peg in the pool though.

The guy uses her while she’s necessary and then throws her away which is something that will keep on happening during the film. Nick likes to paint himself as a victim despite holding these people hostage in their own home. There’s a lot of cognitive dissonance going on the whole time but what it equals out to is that Nick was always the villain here. He just doesn’t admit to it the whole time even while committing crimes the entire film and making things difficult on everybody.

There’s just nothing to like about Nick or even any way to sympathize with him. Nick’s just rotten to the core. Then you have the heroine Peg who is really bad. My main issue with her is how much she puts up with when Nick’s around even before he takes out the gun. She overlooks his constant insults, blames herself when he’s the one treating her roughly, etc. Peg just doesn’t act logical at all throughout the film. You don’t see how she could possibly fall for him under these circumstances. It just makes her look desperate and not very smart either. She just keeps on going back to him over and over again. It takes him threating to murder her around 5-6 times before she finally gets the message.

Meanwhile the whole situation is pretty tough on her parents and brother as well. There’s just not a whole lot they can do in this situation since they have to worry about the kids. The father does try to make a move at different points but Tommy messes up one attempt (Which is why the kids get annoying in these things) and the other one is foiled before he can get too far. It’s hard to backseat drive on this one because whenever there are hostages you have to be really careful.

If it was just him I’m sure that the father would have taken out his gun but as it stands, it’s not like he could really risk doing that here. Worst case, they’d all get shot if this turns into a shootout. I doubt that Nick is a great shot to be honest but at close range like this there’s not a whole lot you can do to dodge.

So most of the tension here is just with the characters having to tolerate Nick and just try to get through the day. Each of the characters have different views on how the matter should be handled as well. Tommy’s too young to understand much, the mother wants to tell the cops, and the father wants to play it safe and just wait until Nick leaves. All of the strategies have their ups and downs of course but without hindsight it’s hard to know which to pick. Personally I’m on the side of making a move. Whether you die or not at least it’ll be over pretty quickly.

This film would probably work a lot better without the romance angle because that’s really the weakest part of the film. It’s still mind boggling the whole time and brings both characters down. At least Nick could try playing the sympathy card if he was nicer. Change up the story so he still ended up shooting the cop who was on his tail and takes the family hostage but isn’t pushing them around, threatening, and yelling the whole time. If he was portrayed as someone who was just scared and not sure what to do next, it would have done a lot to help his character. Yes, he would still be the villain here but he wouldn’t be quite as crazy and bad as he is here. The Nick we see here is probably worse than the partner.

Overall, He Ran All The Way definitely has Nick running every mental gymnastic possible in order to try and pin it all on the other characters. The guy keeps on panicking and making things worse for himself. Ultimately everything that happens in the film is directly his fault. The guy should have stayed on the straight and narrow instead of going down such a dark path. If you want to check out a suspense film where everyone is stuck with him then this may be worth checking out since it’s such a specific premise. At the same time I just wouldn’t call it a good movie. The ending is rather solid but the romance has to be one of the weakest I’ve seen in a while.