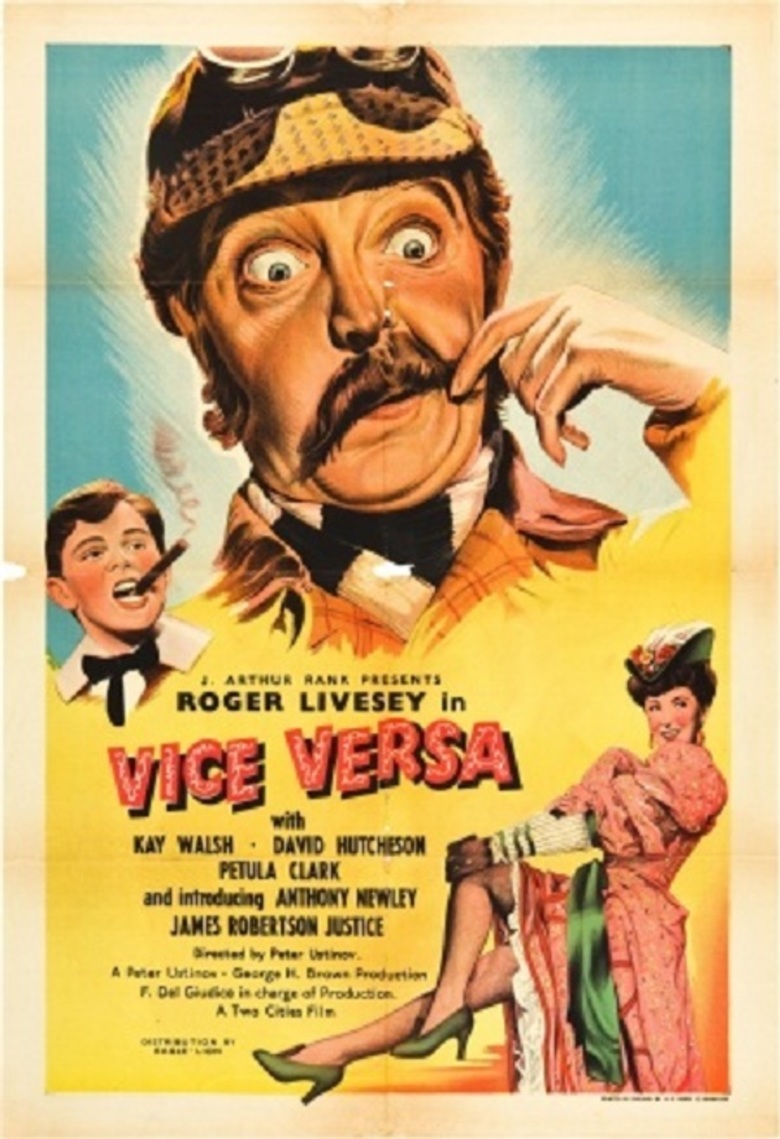 It hasn’t been too long since I saw the newer Vice Versa so it was time to see how this one stacked up. It’s certainly a lot older but it has a very sophisticated feel to it with the script. The movie has a lot of fun with all of the characters using big words to the point where I’m fairly confident it was to parody the very nature of this to an extent.

The movie starts with Dick getting ready to go to school, only he doesn’t want to this time. He doesn’t really explain the reasons to his father Paul much so he just cries a lot and makes a scene. It’s certainly not the most effective way to get your point across, that’s for sure. Paul explains to Dick that school is a blast and he should enjoy it more. So Paul wishes on his magic stone that he could be a boy again while Dick does the opposite. Now that they have flipped roles, Dick forces Paul to go to school. Can Paul handle these tough kids? Will Dick be able to manage his father’s affairs? Also, what is that magical stone that I just mentioned?

Well, going back a bit, the corrupt Marmaduke got a hold of this magical stone. He then learned it was corrupt so naturally he brought it over to Paul so he could throw the bad luck at him instead. He didn’t realize it was a magical stone though. Unlike other versions of the movie, you only get 1 wish for each person this time. So no just wishing yourself back to normal right away.

From the two plots, Paul’s is a lot more interesting. On Dick’s side you have him flirting with the maid the whole time which gets old fast. You’d think he would be using his newfound power to do something a little more useful instead of just messing around. He’s rather sloppy as well and doesn’t help his father’s reputation in the slightest.

There’s one subplot where he has a duel with Marmaduke and it’s the only part of the movie that really dragged on. The duel just keeps on going and going and going. The joke was well played out by this point as everyone chased each other around the castle the whole time. We even got a court scene thrown in. That was at least the silver lining moment of this subplot since those scenes are always fun. We even got to have the audience all come together with music.

Now with Paul’s plot, we got to see him go up against Grimstone which was fun. Grimstone is a particularly tough teacher/principal who makes sure his students are not slacking. He doesn’t even allow them to have candy or anything like that. When they play soccer, they have to let him win or they’ll go into detention. Grimstone is without a doubt the best character in the film. He also has the most sophisticated vocabulary among the whole group. He is always talking like a rather regal figure.

He doesn’t exactly teach by the book but I also wouldn’t say he is too exaggerated. He makes for a much more interesting villain than Marmaduke. Marmaduke has big plans but at the end of the day he got outsmarted by Paul when he was still a kid and probably should have been more careful when talking about his big plan. He was practically begging to be defeated.

Then you have Fanny who is definitely playing the field the whole time. You’re not actually meant to like her either way since she’s another antagonist but why couldn’t they all be as solid as Grimstone? As for Paul, he’s a pretty enjoyable main character. He certainly did like school back in the day although he seems to have grown out of several aspects of it at this point. He complains a lot and gets the other children in trouble. He probably should have thought about that a little more before getting on their bad sides.

That’s one thing you will notice right away here. Paul and Dick keep forgetting they have switched bodies for the entirety of the film. Even right through the final scenes they keep on mixing up what’s going on and talking to people as if they know them. There’s no way you can forget that you’re in a different body considering that the way you see the world is so different. The height difference is absolutely crazy on that front. So part of you wants to think that this is just the film trying for some more parody moments but it’s hard to really get on board with that idea.

The movie doesn’t play this as a gag after all but totally straight. It’s a comedic scene of course as they both keep getting turned away but it doesn’t seem crazy that they forget nor is it addressed. It’s rather surreal and the only explanation here is that both characters really aren’t smart at all. I can’t think of any other reasons in-universe on how they could keep on doing that.

While that part may be questionable, the actual writing in the film is still excellent. All of the dialogue will keep your full attention. That old school way of talking is always a blast and really gets you psyched. It’s just something you don’t see a lot of outside of that. It also makes the film flow by pretty quickly aside from the duel. In general Dick’s subplot was on the annoying side and you can’t possibly like the kid since the power went to his head immediately. If I’m Paul I’m definitely punishing him now that the adventure is over.

Overall, Vice Versa is a pretty good film. It makes for an enjoyable experience and you get to see what would happen if things were switched up like this. The whole magic stone plot was also pretty intense although the villain should have held onto it. I certainly wouldn’t just hand it off to someone without running some experiments. Imagine if it ended up making Paul rich instead? Marmaduke would regret it for the rest of his life.