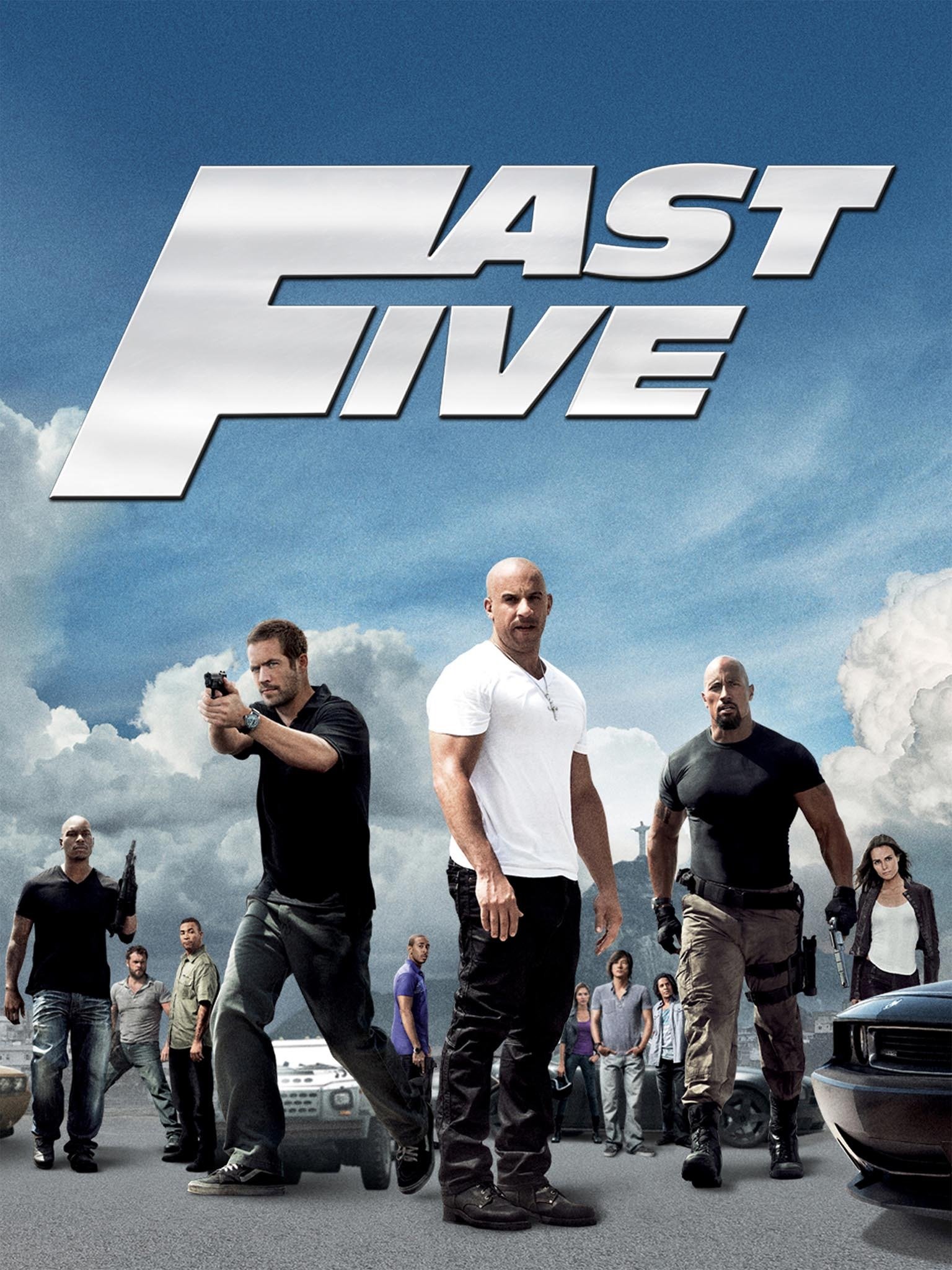 Time for some more Fast and Furious action. This film really dials up the action and turns the series into more of an epic thriller. It’s a transition that works well for the series as it is easily the best film I’ve seen yet. The first 4 can’t touch this one. You’ll be at the edge of your seat for the whole movie and the fight between Vin and Dwayne that is hyped up for the whole film really ends up matching that suspense. It’s going to be tough to top this one going forward.

The movie starts off with showing us how Brian and Mia broke Dom out of prison. More specifically, they break him out of the truck driving him to prison. The gang then end up trying one more robbery to get some money but it turns out to be a trick to bump them off. Dom and friends escape but not before a few agents end up getting murdered by the villains. Naturally this turns into a frame up with the government calling in Hobbs, the greatest agent of them all.

Dom and Brian have big plans though and they don’t have time to flee. They want to take revenge on the mobster who framed them and what better way than stealing all of his money right? They’re going to pull off a heist but to do this they will need the best of the best. So they call in various characters from the first 3 films and prepare to race the clock. Can they get the money or will they be caught by Hobbs?

Right away this film is just so much more interesting than the others. I like when you’ve got multiple parties running around all aiming for different things and this film pulls that off really well here. You’ve got the mobsters, the heroes, and Hobbs’ group. Technically speaking while Hobbs is rather extreme, his group are the only heroes here. Dom and Brian are repeat criminals and if they weren’t betrayed in the first scene they would have gone through with the mission. This time they’re stealing from other criminals which is more of a gray area (Personally I’m cool with it. The criminals are basically officially sanctioned at this point so the only one who can stop them is Dom and the gang) but Hobbs and his group are official government agents who do their best to uphold the peace.

They may not look too much into the situation but then again that’s not necessarily bad. In this case of course Dom was framed but Hobbs is right that it’s not really their job to look into that. Odds are that being framed is rather rare and that’s something you wait for the courts to decide. Not everyone can be a vigilante or things would really start to go off the rails right away.

I also liked Hobbs group. For one thing they are shown to be highly competent. They have several fights with the mobsters and they manage to come out on top each time. Until the climax of the film they don’t even take any injuries and win quite cleanly. After seeing so many films where the agents lose to untrained thugs it was a nice change of pace. Meanwhile Hobbs has a lot of the best lines throughout the film.

One hype moment is when the translator Hobbs hired starts looking through the files and saying that it doesn’t make sense. Hobbs throws the papers away and says that this makes sense (The action of throwing it away) and it was just such an out of the box answer that I found it hilarious. Hands down it was my favorite line in the film. In general I also really liked the banter between him and Dom. Both of these guys are the definition of the “tough guy” character so they don’t tend to back off.

The fight between them was also the best fight in the series without question. They were throwing each other through walls and even leaving dents in the car with each hit. You can see how the characters were starting to get superhuman here. Throughout the movie there’s a lot of good action. You can’t really expect to see any big races here this time but the brief racing that we do get looks pretty solid. I liked the scene where all of the main characters have a big race although you won’t be surprised at how things turn out.

The effects are good as always and the character cast is also at its best. Hobbs aside, Dom is a great character as always too. He looks after his family first and foremost. The guy has a lot of drive and can fight with the best of them. He has a good conversation with Brian about his father. The two may not always see eye to eye but at the end of the day Dom always has his back.

As for Brian, he’s also a pretty solid character as always. He’s not quite as smart or capable as Dom but he doesn’t let this hold him back. He’s still the second toughest member of the team and comes in clutch when needed. Then you have Mia who also helps out a lot in the fights. It’s pretty tough for her since she’s expecting a kid soon but doesn’t let this hold her back.

Now for the rest of the heist crew, I wouldn’t say they’re the most memorable guys around but they’re okay. Roman and Tej get their moments as each person uses their specialty skill to help out. Gisele has a lot of confidence and keeps the others at bay although the way she manages to help out could have been handled a bit differently. You sort of know exactly how things are going to go down early on. Meanwhile that pretty much got rid of Han’s big moment so he didn’t have one here. It was nice to see him…but he ultimately didn’t really contribute. Elena was a solid newcomer to the series. She’s a cop who couldn’t be bought off the way that all the others were. That alone already makes her a pretty solid character and she also has a great motivation which helps make her such a tough character. Elena jumped into danger on multiple occasions and really ended up contributing.

So there’s a lot to like in this film. On the weaknesses side the film still jumps whole heartedly into the fanservice angle. The writing isn’t always great with the side characters making a lot of comments that make you want the villains to bump them off already. In a way maybe it’s for the best that we cut out the racing from these films since that’s all that really happens when the heroes get to the track. I found it pretty ironic that the actual race was cut out so we only got the atmosphere instead. If the writing could be tightened up a bit and we get past the unnecessary moments then the film will really make it into the great territory. Now, there are a lot of funny lines as well so don’t get me wrong but the film isn’t super consistent is what I would say. Tokyo Drift still has the best ending in the series but this one is very solid. It wraps everything up quite nicely.

Overall, This is the best installment in the series yet so it feels like things are moving up now. This is more like what I expect from the series just based on what I knew about it before actually entering the franchise. We get to see a lot of cool looking cars, rock songs, and an intense main cast. The fact that we’ve finally gotten into a lot of big hand to hand fights only helps. I would go as far as to say you could basically start with this film and you’re set since the first scene recaps the important part of the last film anyway.