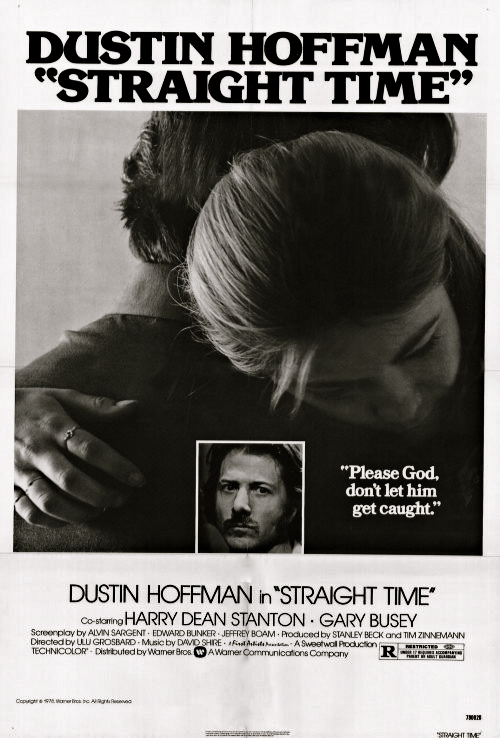 When you’ve got a film about a ex-convict attempting to turn his life around, you have to wonder if he will make it through to the end or if he’ll go more Ocean’s Eleven style where the message he learned was just not to get caught next time. Well, no matter how you slice it, Max wasn’t quite ready for the journey that was to follow here. The movie ends up fumbling relatively early on and is never able to get up again.

The movie starts with Max being released from prison. He’s been in and out of prison a whole lot over the years but maybe this was his last time. His parole officer is Earl and he reminds Max that there are a whole lot of strict rules and regulations that Max will be expected to follow. Max decides to break those rules immediately as he picks his own place to sleep and basically tests Earl’s patience.

Later on Max is finally able to get a job and starts complying but also immediately asks out a girl named Jenny. She agrees to go out with this man she has only known for 5 minutes and things are looking good except that Max goes back to hang out with his friend Willy who does a lot of drugs. This naturally ends up putting Max back in jail temporarily through a mix-up. Now Max is wondering if he will ever truly be free or if maybe he should just go back to his life of crime.

That’s the dilemma he finds himself in, but Max really doesn’t do himself any favors. For starters, he should have been following the rules of his parole pretty seriously. Messing up on day 1 is pretty bad. Then you have the whole trying to get back into the romance game so quickly. At least give yourself time to try and get used to the swing of things right? He jokes about dining and dashing immediately which isn’t a good idea.

Max gradually deteriorates throughout the film and I can definitely say that I wasn’t a fan of the guy. It didn’t seem to be like he really made an honest effort to try and turn over a new leaf. He definitely shouldn’t have allowed his friend to do drugs in his room and then he was very quick to just decide to start robbing places again. The instant you turn to a life of crime you’ve lost any sympathy points you might have had.

You’re rooting for the cops to capture Max as soon as possible. The guy’s just unhinged and is a danger to society. Based on how often he has been captured though, I don’t expect that he will be on the loose for long. As for Earl, he is the kind of guy who definitely doesn’t like to be shown any disrespect. Max starts defying him early on which leads to a very quick breakdown in their relationship. As a result he goes pretty tough on Max. He seems like he would have probably been a decent parole officer otherwise.

As for Jenny, my main issue with her is that she just seems way too at east with the whole situation. She meets up with Max and within minutes she is prepared to go out with him. Then she gradually learns that he’s a criminal and has a very minimal reaction to it. He starts getting rather rough about this as he yells that he can do what he wants and that he won’t change who he is. Jenny just accepts this as well.

It’s nice that she is so dedicated but you never really understand why she is. It’s like she just woke up one day and decided that Max must be a good guy. At least she’s a positive influence compared to his other friends Willy and Jerry. Willy and his household just seemed really messed up when Max got invited over. The whole place just didn’t have a good feeling and part of the tension is likely because of the drugs. I would have cut out the whole visiting scene entirely.

Meanwhile Jerry is probably the smartest character here in terms of when they’re actually going through with the heist but at the same time, he had a pretty good job and was making good money so deciding to go back on a life of crime wasn’t very smart. He didn’t put himself in a good position at all. If your partner isn’t leaving the crime scene in time then it’s definitely time to ditch him and escape before it’s too late.

Aside from the unlikable main cast, the movie just isn’t super interesting. It’s more frustrating than anything when you have to follow a bad main character. You see him making all of the wrong decisions time after time and can only shake your head. This is one of those films where it feels like Max creates all of the problems for himself.

Additionally, the romance in the film is just way too rushed and unrealistic. It goes too far in such a short amount of time and the film really didn’t need to include it. The way Max acts all defensive and treats Jenny despite him causing all of the trouble just makes him even more unlikable. They have a one night stand in a scene that goes on for way too long and definitely shows more than it should. All of these elements bundled together show that the film was trying to be a lot more gritty and intense than it needed to be. As a result, it wipes away any good parts that it might have had.

Overall, Straight Time won’t leave much of an impression so you’ll probably forget about it before long. I think it’s a story that could have been handled a lot better but the execution wasn’t on point. To a large extent the film just feels dirty. Every house/landmark in the film is as old as can be. The prison is deteriorating, the motel hasn’t been kept up to date, etc. The characters are morally bankrupt and it feels like the whole town is living in a bad neighborhood. Even the light hearted scenes never quite get all the way to being happy scenes as you feel a sense of dread. With some good characters that can be an effective combo but with nobody to root for, it just adds to the dragging experience of making it to the end here. I’d definitely say to give this one a hard pass.