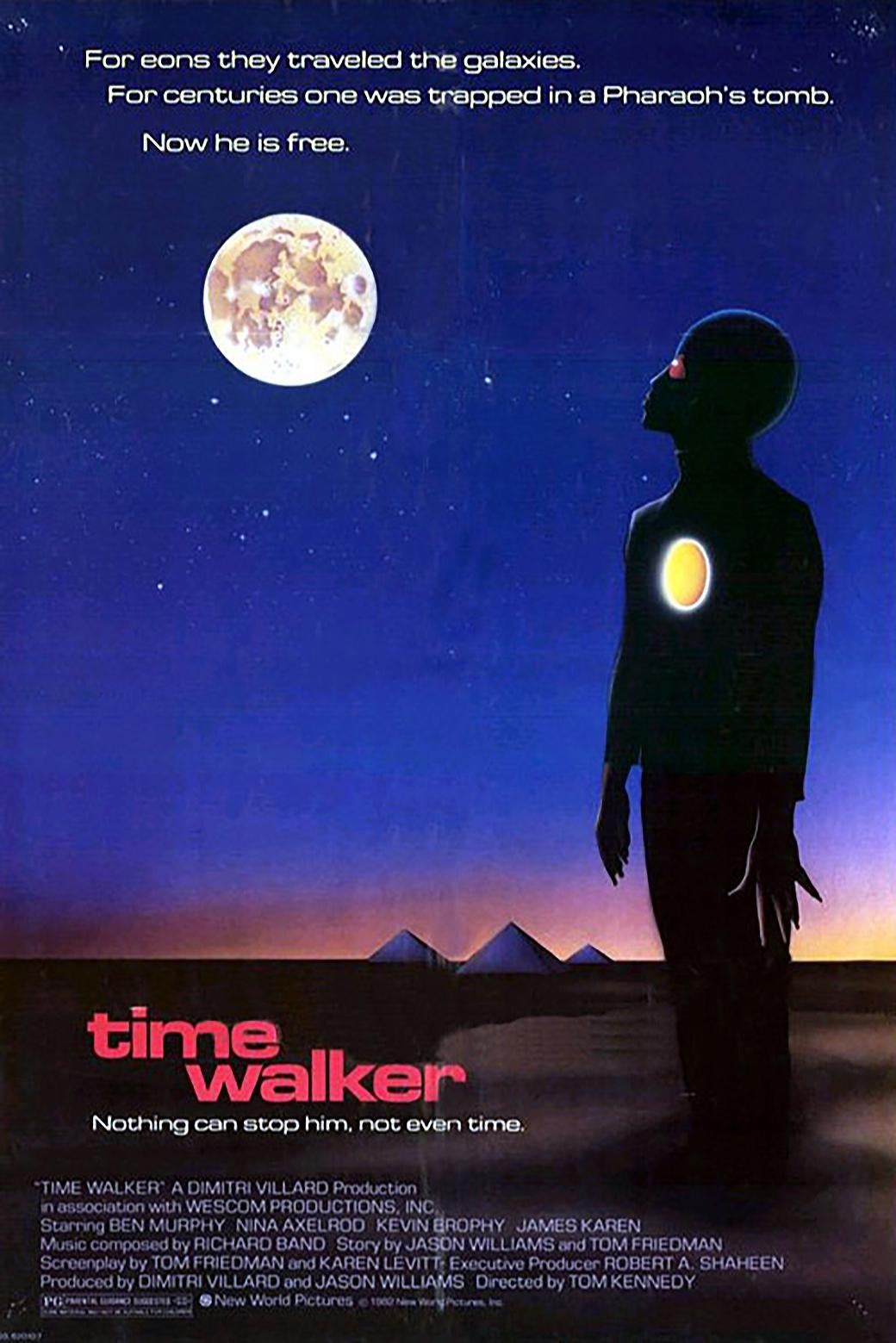 So I finally watched the trailer for Time Walker after checking out the movie and let me tell you, it’s pretty intense. I think if the film had kept up that same energy it would probably be remembered a bit more fondly. Play up the alien angle and lets just get it rolling. As it stands, this is a pretty classic old styled horror film where you’ve got a creature walking around and a bunch of humans doing their best to stop him. The characters aren’t that great but the creatures themselves have some decent abilities.

The movie starts with the archeologists breaking into another tomb to see what curse they can inflict on the world this time. They end up finding a giant sarcophagus and figure the best thing to do is take it back to the school. Professor Douglas uses this as a learning exercise for the rest of the gang. There’s a mysterious fungus on the coffin and one of the students is sloppy so it gets all over him. So here’s how this works, the fungus will basically spread across your body until it turns you into a skeleton. Radiation speeds up the process.

Anyone who has touched the fungus is doomed. Now this would be easily contained except unfortunately one of the students is a guy named Peter and he’s not the best guy. He notices some gems in the coffin and steals them. He then gives them to various students. What he doesn’t realize is that these gems are needed by the alien that was trapped in the coffin for some kind of device. Now it is mad and aims to take all of the gems back with force if needed.

Now, what is the point of having the Mummy actually be an alien? Well, that’s a good question because it really doesn’t seem to matter one bit. Yeah you have the very last few seconds but otherwise it doesn’t impact the plot and that is a bit of an issue. If it walks like a Mummy, looks like a Mummy, and acts like one then it might as well be a Mummy right? The alien factor just doesn’t come into play so I can see how this would be pretty disappointing if you were watching it in the theater.

The alien aspect was a huge part of the promotion so for him to not do anything is disappointing. I’d also say the design in the posters is a bit cooler as it has a bit of an Iron Man vibe. The version in the film doesn’t really look like that and just appears to be a Mummy with some kind of power source. At least he does have super strength though so I’ll give him some points for that. A single throw was enough to take someone down for the count.

There aren’t really any likable characters here though. Most if not all of the students are just annoying. They’re busy having parties and messing around with each other the entire time instead of taking anything seriously. One of them has a girlfriend but immediately gets distracted by another girl. Instead of breaking up with this chump, the girl allows herself to be bribed by a gift in the very next scene despite witnessing what just went down. Then you have Peter who actively works against the investigation and it’s due to his need to steal things that the Alien Mummy gets so many victims in the first place. If the gems had stayed in one place then there wouldn’t have been an issue.

Douglas is also pretty suspect as a professor. You really shouldn’t let students be messing around with something that could be extremely dangerous. They weren’t wearing masks so what if there had been some kind of plague in the air when they opened the coffin? He’s also having an affair with one of the students which is another questionable part of his character.

Okay there are some more fun things about the film though. One is that the sound effects are absolutely on point. The warning sounds for the generators and computers sound like something out of an old Galaga game. I wouldn’t be surprised if they got the sounds from there. While it wasn’t executed very well, I also liked the idea of the alien needing to grab these gems to accomplish his goal, whatever that was. It’s like a villain collectathon which is different from the usual mission.

I don’t really understand why the Egyptians would bury the alien along with his power gems though. Why not keep them separate in case he ever wakes up? If the gems had been gone then you can only imagine the whole time that the alien would be out of luck because there would be no way for him to find them. He has a hard enough time locating them at short range so I doubt he would be able to find them at long range. I mean, even when he was in the room with the gem he had to look around and check every part before finding it in the case. This was just for an artificial scare and some fanservice but it does make the alien look even worse. Cmon now, if your scanner’s any good you should have known where in the room it was as soon as you entered….

There is one decent character which is the local cop. He’s definitely not pleased about this becoming a big deal and is eager to quickly get this under wraps. The guy’s not super brave though and gets nervous early on when the alien is on the move. I also liked the president of the school who was not willing to listen to the professors and said the show must go on no matter what. He even invited the press to the whole coffin angle. I always like these characters who have a whole lot of bravado. Same with the teacher trying to replace Douglas. He even has a whole Scooby Doo type “I caught you red handed!” speech at the end. You’d think he has bigger things to worry about but the guy just wants his promotion immediately.

The soundtrack is pretty decent. I doubt you’ll remember a lot of tunes by the end but it’s got a decent danger theme when the alien is walking after the heroes as well as any scene when it’s causing havoc. I know what you’re thinking. How can you ever get caught by an alien that moves with the speed of old molasses? Well the main way is to trap yourself in an elevator with no way out or to charge the alien as if you’re Superman. Otherwise the alien should have no chance the whole time. How hard is it to stay ahead of someone who can only walk at turtle speeds? This is definitely something they need to fix with these Mummy type creatures. Seeing in all green doesn’t exactly make it any spookier either since nothing tends to happen in those scenes.

Now this is an 80s film but you will have to remind yourself of that several times. It really doesn’t feel like one, this could easily pass for a 70s film visually and even a 50s film in terms of writing. It’s all very old school. Now the writing itself isn’t anywhere close to the old films but it does have a grand feel to it. If anything the horror soundtrack here would work really well in those classic films like “Curse of the Fly”. After all, Time Walker does take itself extremely seriously…even if you won’t be able to as a viewer. The whole final scene is meant to be dramatic but I thought it was pretty funny. When you think about it, the angle of the gunshot should never have made hit the guy if he was aiming at the alien. Then you have someone grabbing something that he should have known has been incredibly lethal to anyone who touches it. It was a comedy of errors by the various characters in the climax that’s for sure.

Overall, Time Walker is a glorified Mummy film. I would say it’s a good Mummy film, far better than most but this is not an alien film despite the poster. There is no time travel here and the alien isn’t acting much like an alien. I’ll give the film credit for the ending though. A lot of times these old films tend to end rather suddenly but even for this one I was wondering how things were going to play out since there were only a few minutes left and the film hadn’t ended. Well…that’s because it doesn’t. The film closes out on a big “To Be Continued” screen which was actually impressive. That’s something I’d like to see more films do. Granted, I think they’re slowly getting more accepted in the mainstream like the Hobbit or Infinity War but even those don’t end with a huge “To Be Continued” message like this one does. It’s bold, ambitious, and I like it. It’s just a shame that we didn’t actually get the sequel for this. I’d definitely have been pretty psyched about that.