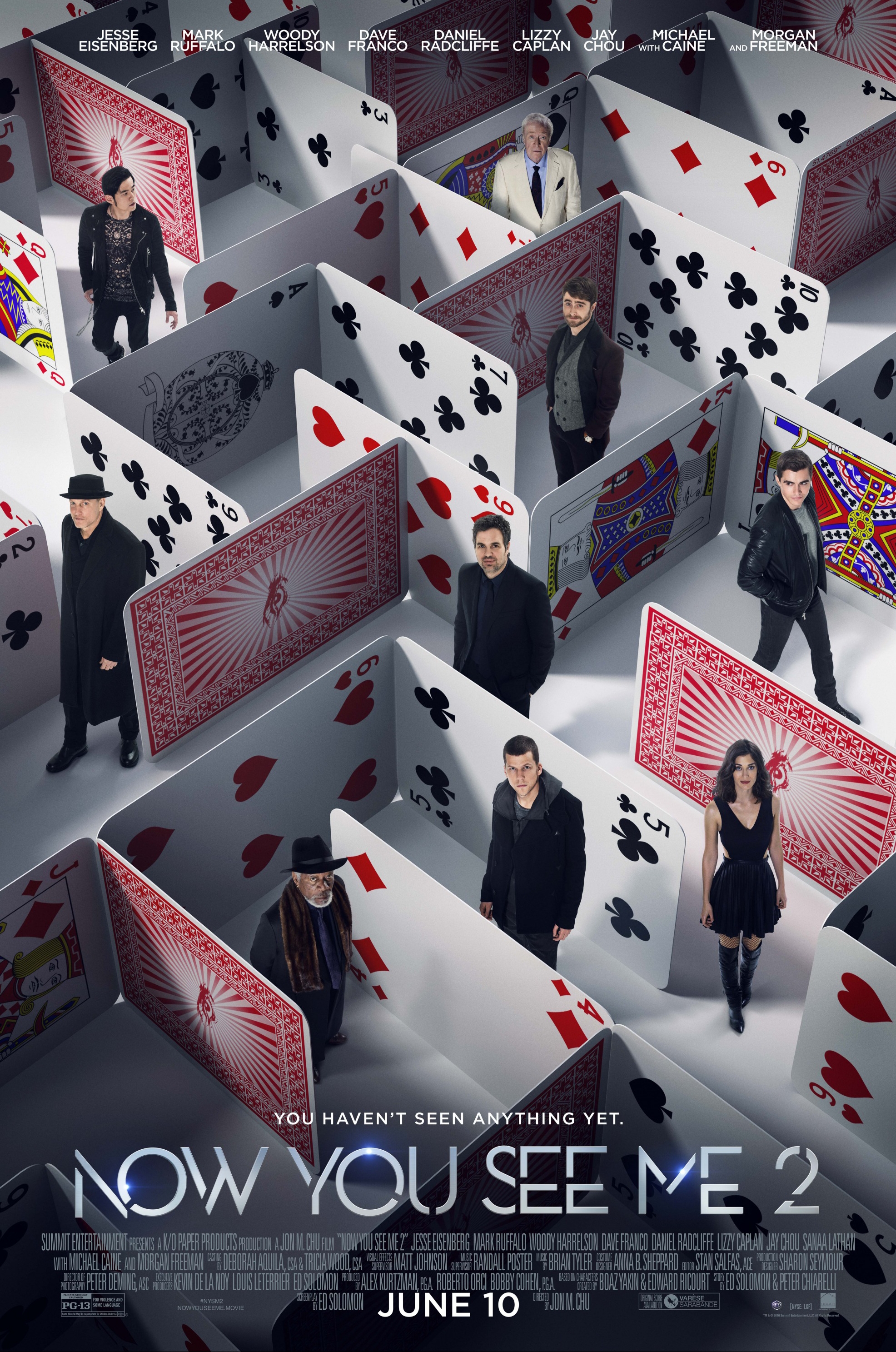 With the first Now You See Me there were definitely a whole lot of magic tricks on display. Most of them wouldn’t work in real life though so by the end you might as well say it was real magic. There were a ton of plot twists as well so things kept on spinning. Well, this film continues that as the stakes get higher and the magic even more fantastical. It’s a fun film but after a while you have to accept that the main characters know real magic for this to make sense.

We pick up about a year after the first film. The Horsemen are currently in hiding since they are nationally wanted fugitives at this point. Still, Atlas is sick of hiding and asks the Eye to make him the leader over Dylan. The Eye says that might happen someday so just keep pressing on. Shortly afterwards Dylan arrives with the next mission. It’s time to expose another corrupt company. The only problem is that the Horsemen are quickly overwhelmed by a new villain and kidnapped. They must now obey Walter’s orders and steal a tech device or they will all be murdered.

Trust me when I say there is really a lot going on here. Pretty much every character from the first film returns and then you have quite a few new villains popping up here. It definitely raises the stakes and you have to really pay attention if you want to keep up with all of the various plot twists as well. There are so many twists that you feel like the film goes in a full circle where each villain has a plan that’s around 15 layers long. It’s pretty impressive even if it’s also a bit hard to believe at times.

First off, it is fun to see the magic the way the film uses it. Every trick appears quite grand. The characters are good at talking really quickly while they divert your attention and pull out some other kind of trick. The only weakness is part of the fun would be trying to solve the tricks yourself but with half of these appearing to be pure sci-fi there isn’t anything to figure out. Character teleport around the rooms and move as if they were as fast as the Flash. Not only are you suspending disbelief at this point but you actively know that the film is mocking you.

It’s a blast as long as you do look at it through a supernatural lens though. These magicians were scouted by the Eye after all so why wouldn’t they have some kind of ability with the supernatural right? It adds up if you ask me and then it definitely helps clear the air. The special effects are really on point as well. Everything looks really sharp and high tech. You feel like you’re at a futuristic magic show.

The soundtrack is also impressive. It may be a bit limited but the tunes are memorable to be sure. So even if you hear the same track a lot, it becomes more of a theme for the main characters than anything else. The writing itself can be rather shaky at times though. As I mentioned, the film loves its twists but much like the first film, it feels like the twists are here to be here even if they don’t make sense.

A good twist does not necessarily need to be foreshadowed but it should make sense. There have been many great twists in cinema like the Joker intentionally getting captured in the Dark Knight, Eggman tricking Tails into confirming the validity of the Chaos Emerald in Sonic Adventure 2 Battle, Darth Vader calling Obi Wan’s bluff and stabbing him in Star Wars, etc. Then you have twists that don’t really make sense in titles like Attack on Titan that make you think. This is definitely in the latter where even with hindsight if you look back at the films they don’t make sense.

The films have you in a whole merry go ride as things go back and forth and it’s all entertaining but I wouldn’t say it meshes. Still, you can look through it like most. The twists are entertaining and taken at face value, they can be a blast. The script itself also has a lot of great dialogue but also some cringey lines as well. You’ll be shaking your head at quite a bit of the dialogue. So the writing is a mixed bag. The story itself will keep you very well engaged but it’s clear that making everything fit in with the story is secondary to shock value.

As for the characters, I would say the antagonists really steal the show here. First we have Chase who is McKinney’s brother. He’s a pretty terrifying antagonist because he can mind control the other characters with ease and is also able to read body language perfectly. Effectively eh can do anything that McKinney can do to an even higher degree. The guy is twisted and very confident in his abilities. You won’t be forgetting the guy anytime soon.

Then you have Walter who is another genius. The guy enacts a pretty big plan to take down the main characters while barely lifting a finger. He may not be quite as high up on the list as some of the other masterminds but he has his moments. He was a fun antagonist and certainly did well in building up his own team.

Thaddeus can’t be forgotten either as he wants revenge after being captured in the first film. He knows that he has a lot of ground to make up after all so get ready to watch him act all knowing from his prison cell. Turns out you can do a lot from there. He’s incredibly confident and smug as always and is an entertaining character.

Likewise I enjoy Arthur for most of the same reasons. He’s not quite as clever as some of the other characters but he is incredibly rich and has a lot of connections. As a result he can really open doors that nobody else can and doesn’t have to hide from the others. You can definitely tell that this is the kind of guy who definitely won’t hide from anyone.

As for the heroes, we have Atlas who shares the lead spot with Dylan. Atlas was effectively the leader for most of the first movie so he’s not happy to be playing second fiddle this time around. The guy is pretty smart and as talented as ever so it’s easy to see why he doesn’t want to be a backup. He’s my favorite member of the team and does a good job of taking the lead.

Then you have McKinney who likes to take things easy and rarely gets serious. This film is pretty hard on him since there really isn’t a whole lot that he can do against most of the villains. his mind manipulation is still a pretty deadly ability though and not something to be trifled with. I’m not a big fan but he’s not bad.

Next up is Jack who is still the most hands on member of the group. He’s really good with card tricks and has even started learning hypnosis. As a result he now has two special talents which has to make him the most powerful member of the group overall. He’s more charismatic than some of the other characters. While he’s a junior member, I expect Jack will continue improving rapidly.

Lula is the new member of the group as she replaces the previous heroine. Her debut appearance is impressive as she speed blitzed Atlas multiple times and basically humiliates him by staying one step ahead. Her talent is being an expert escape artist and she does this really well. I’m not a big fan of her character though as her main personality trait is being as loud and obnoxious as possible for distraction purposes. Or it might be her main personality but she’s a bit more crude than the rest of the team.

Finally you have Dylan. It’s pretty neat to see him as the commander while still messing with the FBI in the intro. The guy was shown to be the ultimate mastermind at the end of the first film and he keeps that hype here. There’s one scene in particular where he has to fight a bunch of opponents at once and manages to keep them at bay using his magic. Now that’s impressive and not something that just anybody could do. He made for a solid character and one of the best heroes.

Overall, Now You See Me 2 definitely succeeds as a fun thriller. Perhaps calling it a heist film would be more appropriate though. The music is on point, the special effects are really cutting edge and I enjoyed the cast of characters. When you put that all together you have a recipe for a very successful movie. What holds me back from calling it great is that the writing could definitely use a lot of work. It’s a fun film but one that doesn’t hold up under scrutiny. There is a lot of replay value though so I’d consider it a higher tier 7 but it just can’t make it to the next bend. There’s a fun sequence where the characters are all throwing cards around while everyone on the opposing side forgot to bring their glasses so they don’t notice anything. I thought that was pretty creative and a good way to show off their sleight of hand.