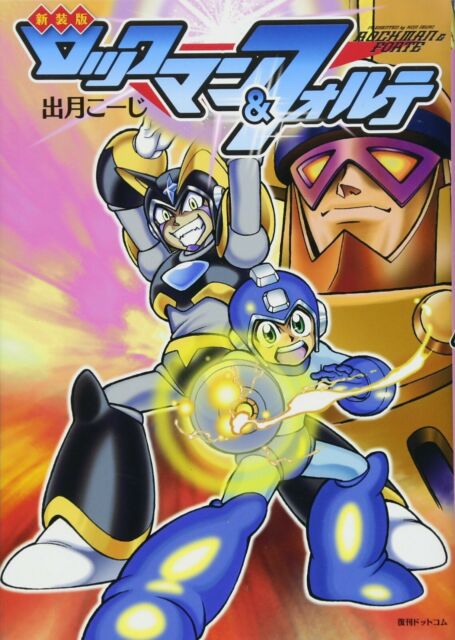 It’s been a little bit but it’s time to finally check out the next Mega Man manga. It’s based on the & Bass game which was a lot of fun on the GBA. I remember sinking a ton of time into that one since it’s also really difficult as you would expect from any Mega title. At 10 chapters, it’s a pretty solid adaption. It does have to skip through some of the robots due to the end arriving so soon but it’s got a good amount of action and story so I was on board. I just wish Bass could have looked a bit better.

The manga starts a chapter 0 that introduces us to the characters. Mega Man is hanging out at a museum when a robot appears and mind controls all of the old robots who are being held there. The mind control signal that is sent out is unable to control Mega Man or Bass though as they are made of sterner stuff. Mega Man takes down the robots in the museum while Bass shows up to help since he doesn’t like the idea of anyone trying to mind control him. It may not be the most selfless reason to help, but it’s a reason I suppose so that’ll have to do. They take this guy down but was it really just a rogue robot trying to mind control people?

That leads into the true chapter 1 where a robot named King appears on TV and declares that from this point forward the robots will rule over the humans. Mega Man doesn’t like the sound of that and his fears are realized when Dr. Light and Wily realize that all of their data has vanished. They’re forced to band together to stop King now. To do that, Mega Man is sent into the field. Bass also wants to take King out to prove that he is the strongest robot of all. King aims to control all of the robots in the planet and Bass can’t let that stand. Will this powerful duo be able to save the day?

The art is definitely really solid here. It’s not quite at the Megamix level but the characters are all on point and the action scenes are very clear. It’s always easy to see what is happening at a glance and this is really an ideal kind of art style. It’s not quite as detailed as some others but this more basic approach worked really well here. Everything just pops out as a result.

The pacing is very quick as you can imagine. Of the 10 chapters, the first one is a prologue that doesn’t have much to do with the story and the next chapter is the intro so really you have 8 chapters to tell the story of the whole game. I’d say it handles this really well. Now, if your favorite Robot Master is one of the ones that doesn’t get a lot of action then you may be in a pickle but most of them get solid fights. It’s also been a while since I played the game so I’m not sure if these are the same 8 from the game but I’d assume so.

Bass gets a lot of hype moments but he will remind you a lot of Vegeta. He always goes in talking tough but ends up losing most of his fights. He was losing to the hand in chapter 1 before Mega Man stepped in, he was losing to Ground Man as well, then he lost to Tengu Man, and of course he lost to King at the end. The only fight he won was against the 3 guardians when Bass speed blitzed them all. Considering that Bass is in the title and everything, you just feel like he would have been more effective in combat. At least, I was certainly expecting that this would be the case.

I get that he was never as powerful as Bass EXE but he is still meant to be Mega Man’s rival after all so you would expect a level of hype there. Ah well, he may not get the wins but I still like his absolute confidence so he would be my favorite character in the story. Hopefully we get more classic Mega Man manga titles with Bass in them at some point. I know there are a bunch of other titles that have never been scanned so those are his best bet. 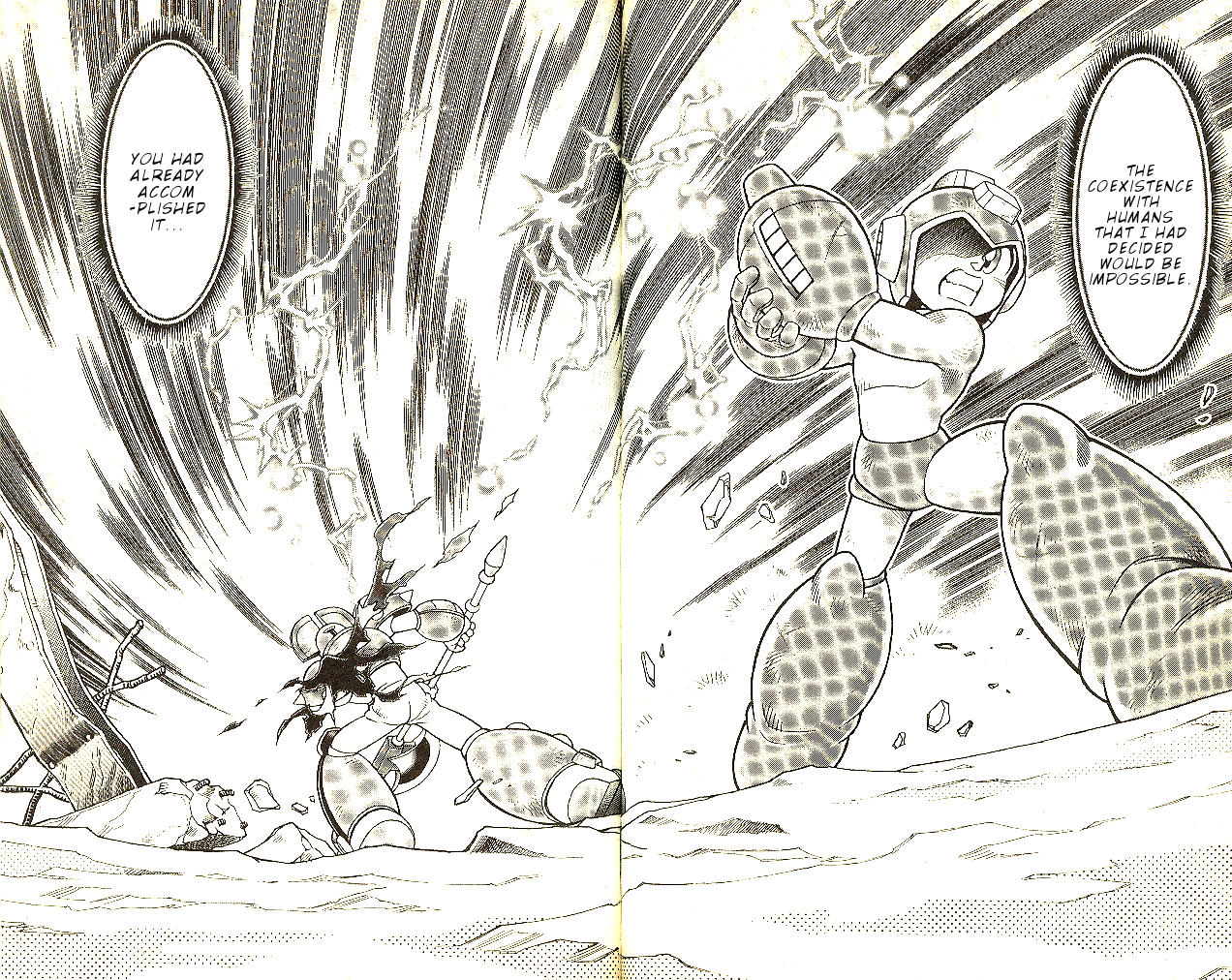 As for Mega Man, he’s a solid hero as always. He may have lost his confidence rather quickly when King showed up, but after a pep talk from Proto Man he was definitely ready to jump right back into action. He certainly seems to be a lot more powerful than Proto Man or Bass in this version so Mega Man really gets his props. His ability to copy weapons/abilities is still as useful as it ever was. Mix it all together and it’s easy to see why he is called Mega Man.

Meanwhile Dr. Light and Dr. Wily also get roles here. Wily looks pretty bad in all of his screen time though. The guy forgets his pants a few times and is shown to be super lazy. Throughout the adventure he is played purely for comic relief and naturally gets betrayed at one point. It’s nothing new for him of course, but you almost feel bad for the guy. He is not portrayed as being anywhere near as smart as Light here as his robots have a lot of clear flaws while Light’s appear to be perfect.

Dr. Light definitely looks a lot better. Ultimately it’s not like he will fight a lot or anything but he actually does go into the field at one point which is cool. Likewise for Roll and the rest of Mega Man’s friends. There’s even a little Mettaur in the series who acts as an ally. He wants to be big and strong one day but gradually comes to terms with the fact that he is a Mettaur.

Proto Man gets a small but important role here. It’s definitely intense to see him get sliced apart here. It’s got to be the most violent moment in the series but of course he is a robot so it’s not as if it’s all that violent compared to anything else. It’s a good way to establish King as a threat. It may not be a great look for Proto Man but he was never meant to be quite as powerful as Mega Man. It shows where his limitations are, but the guy is always ready to throw out some cool sounding lines. I’ve got a lot of respect for the guy and he gets a good amount of justice here.

As for King, he’s the big villain here of course and I thought he was really solid. His idea of making the robots rulers of the world is nothing new but it’s a solid plan overall. The humans definitely don’t seem to give them a fair shake. Even in this series the government is super quick to decide that they have to bomb the city to destroy King even if it means destroying Mega Man, Proto Man, and Bass. Light has to step in to try and stop this but the robots do appear expendable as King mentions.

So King makes for a very interesting villain. He’s also a very powerful one seeing as how he is able to take on guys like Mega, Proto, and Bass. He has to do the heavy lifting here since none of his minions are nearly as powerful. One of the big minions to show up is Tengu Man who looks pretty solid. He can fly with great speed and has to deal with both Mega Man and Bass. You’d think that these odds would be way too much for him but the whole thing is a lot closer than you would think.

Ground Man is another robot who gets a decent role. His drills are hard to stop since they have enough power to even temporarily overpower Mega Man and Bass. It’s always interesting just how powerful these guys are since our two heroes are built for combat while these minions presumably weren’t. It just goes to show that Light is always building these robots with top of the line equipment no matter what they are used for.

Cold Man is another robot who gets a decent role. It’s a little funny how everyone tries to think of a weakness and then Wily admits that “heat” is the weakness. I mean…it makes sense, but it’s also so basic that you have to take a step back. The rest of the robots don’t really get solo roles as the final 3 just rush Bass. It was a cool group fight though since to that point Bass hadn’t gotten to look too impressive. At least this way he had some opponents he could blast as he went for the win.

The series is definitely very by the books but it also shows how many cool stories you can tell in this universe. In particular the two stars and Proto Man are just a blast. More screen time for them would be an absolute win. Gigamix still stands as my all time favorite Mega Man story because of how well it used the characters. We got top notch fights and end of the world stakes. Typically X and the other titles are more known for that but Classic can definitely rise to the occasion as needed. This one does have a good degree of humor as well but the fights are played straight.

Additionally, the villains often bring up good points here. Light may have built a ton of robots but it isn’t exactly a utopia for them either. The robots aren’t really treated fairly and are tossed as soon as they aren’t useful here. The manga even touches on how some of the humans don’t even trust Mega Man. You could absolutely have a great ongoing about this someday.

Finally, a quick shoutout to the fun banter that Mega Man and Bass have. I like the dynamic they have going for them like when Bass just walks into his house and grabs a few power gems. Bass is quite at home no matter where he is and that’s the kind of confidence you would like to see from him. There isn’t time for more slice of life type moments like this but it does help flesh out the verse even more. Little scenes like that are fun to get some character moments between the battles. Of course if you have to choose, then the manga still makes the right call in focusing on battles above all else. With limited time you have to move as fast as possible. 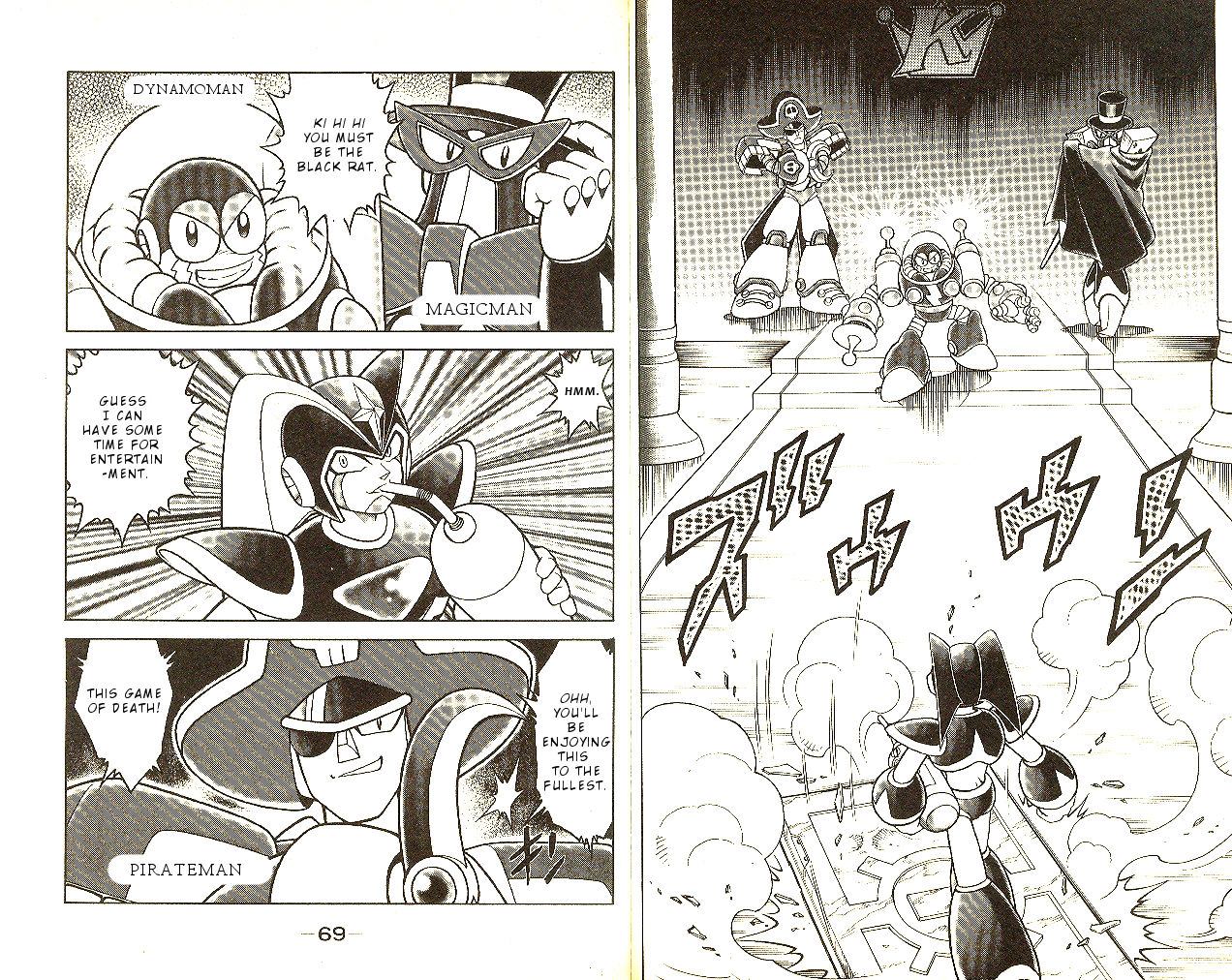 Overall, Mega Man & Bass is a fun manga. It’s really straight to the point as you see the heroes jump in and start fighting the villains. There’s not a lot more to it than that but at the same time, do you need more than that with these guys? The classic robot action is what you came to see and the adventure does a good job of it. With a good balance between action and humor, this is a winner and definitely a title I would recommend. It just has no flaws and you’ll be blasting through it. It’s a very fast but satisfying read. Maybe one day Bass can get a spinoff manga of his own.