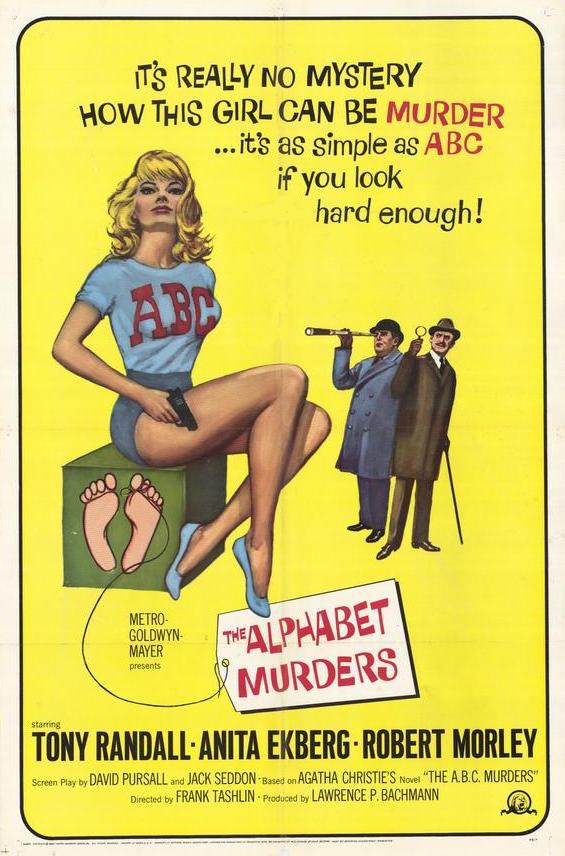 Time for a very different kind of Poirot film. Throw away everything you knew about the character beforehand as this one goes as far as to act like a parody the whole time. The movie even starts off with the lead breaking the third wall which is certainly something else. While I do like the film and will go into it in a second, I will say that the breaking the third wall gag felt flat as it often does. In very rare circumstances will I say that such a scene is good. It really just serves to take you out of the story in the same way as seeing the main character in the present talking about how he barely survived the events that we’re about to see. Fortunately the film didn’t go that far here.

So the movie starts with a poor clown getting murdered. He seemed to be shot by a mysterious woman. Then another victim takes their final dive and so Poirot will have to be the man to put a stop to this. Surely the world’s greatest detective can stop this criminal right? The only clue that the heroes have is that this villainous seems to be murdering people according to the alphabet. The first victim’s first and last names began with A, the second B, etc. Well, Poirot won’t have to search as hard as all that since the villainess confronts him straight up. She talks about how she doesn’t want to murder but that she must and other vague things as she beats the stuffing out of him and runs off

Prepare to see Poirot get beaten quite a bit in this film. He’s really not prepared for the kind of opponents that he is dealing with as this version is fairly weak and also not very intelligent. He has to rely on luck and physical ability in order to complete this case and I wouldn’t say that he is the toughest guy on the block either. Mix all of these things together and it doesn’t bode very well for him. The opening scene where he is getting choked by Amanda is also pretty odd. Perhaps intentionally and perhaps not but for me it didn’t even seem like she was seriously trying to murder him.

Or at least it was very half hearted with how they were tussling around. Poirot was calling for help the whole time but everyone would either misunderstand him or promptly get knocked out. It was crazy but I would say this was the best scene in the film partially because of how insane it all was. It can also be spooky, imagine calling out for help the whole time but nobody steps in because they think you’re all right? Now that will keep you up at night if you almost got choked to death. Poirot believes it was the lady’s way of asking for his help after it’s all over.

While Poirot is beaten and outsmarted throughout the film, he is a fun character. He does have some decent plans like pretending to choke himself to get Hastings to lower his guard. Poirot spends half the film trying to defeat the other good guys as opposed to going after the villains which is also meta in a sense. Fortunately for the heroes the villains don’t go around murdering too many people because they would have been in no position to stop these guys.

The hero is arrested and captured more than once. He’s not very good at being self aware like when he was chasing the girl. You’re actually rooting for the civilians to stop him since without context the whole thing that appear to be really crazy. It shows that these people aren’t just going to stand for this. The other main hero in the film is Hastings and he’s basically this film’s version of Watson. Hastings isn’t very smart and often gets outsmarted by Poirot but he means well.

What the man lacks in skill and bravery he makes up for in loyalty. You can always count on him to have your back and that’s a powerful thing. He even attempts to provide assistance during some of the more dangerous moments even if it doesn’t end up working out most of the time. I gained some respect for him when Poirot wasn’t able to outsmart him for once near the end of the film. It was almost like character development of sorts.

As for Amanda, well she’s a decent villain I guess. I think the whole plan was way more convoluted than it needs to be but granted, that could be due to the adaption. After all, in most cases it would be tough to murder Poirot or outsmart him so you can see villains coming up with all kinds of crazy plans to throw him off the scent. In this one though, well it would be extremely easy to bump him off. Poirot was being overpowered in the steam room after all and he was also chasing Amanda in the darkness with ease. Just set a trap for him at any time and I’m sure he would fall right into it. That’s absolutely the game plan the villains should have had without having to go with this whole ABC angle.

Amanda did a good job of completely tricking Poirot though so I have to give her some props there. All in all, the writing is good. It’s definitely not meant to be taken seriously in the slightest but you’ll get a good amount of witty dialogue. Some of the visual humor is nice too like when each character is snapping their finger at the other to grab a hat and other things. They had good coordination there and it made for a peaceful scene.

Ms. Marple also gets a little cameo here which was neat. It’s always good to establish a crossover continuity here and it also is a good way to show where Poirot ranks in comparison with Marple. In her one scene she was able to easily crack the case but presumably the cops didn’t believe her. Meanwhile Poirot “solves” the case by the very end and it took everything he had.

Overall, The Alphabet Murders is pretty good. It’s a shame that we didn’t get some kind of sequel. Who knows, maybe it’s better as a one off, but there’s a whole lot you can do with this concept. The bumbling detective and his witless sidekick is not something that’s done very often at all. I’d also have liked a full crossover with Ms. Marple. From what we saw of her, she would likely have the advantage in a fight but with both characters having such a strong ego, I’m sure this would be a lot of fun. This film goes by pretty fast and ultimately how much you enjoy it will be directly related to how funny you find the characters to be. Does the dialogue feel naturally comedic or does it all feel forced? This is the question that will determine it all.