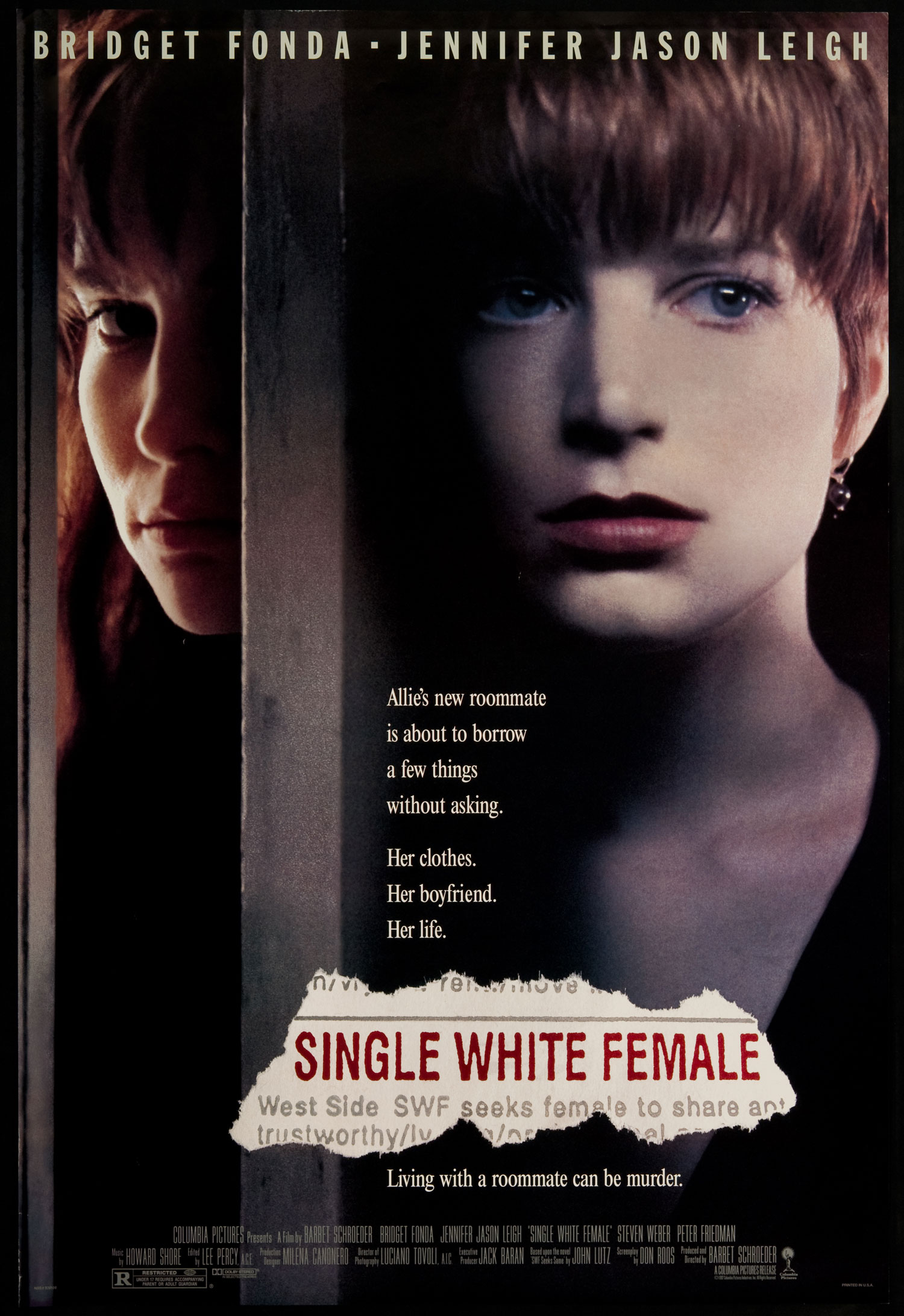 The poster for this film is certainly ominous. Now, I’ve never been someone who was a big fan of the whole roommate concept. Sometimes you gotta do it because financially there’s no other option or you’re in a school where that’s the system. Okay fair enough. Deciding you want a stranger as a roommate for kicks/companionship? Well…that doesn’t seem like it’ll be a recipe for success and in a horror film like this one you can imagine that this is the case. (The music treats it like a horror at least)

The movie starts with Allie finding out that her boyfriend Sam is cheating on her. She kicks him out but later on he admits that it was just a mistake of passion and she ought to forgive him because he’s a nice guy. Allie refuses and says that she never will. That should be the end of the movie right then and there. Full stop, credits roll and we have a pretty bad movie but a short one. Instead, Allie decides that the place is too lonely by herself and so she advertises for a roommate. The insane Hedra shows up and Allie thinks this is a good setup. Hedra seems okay at first but she quickly begins to take control of the place, yelling at Allie and lying a whole lot. Can Allie stay safe while also entertaining the idea of getting back together with Sam?

First off, I definitely have a big problem with the whole getting back with Sam thing. Look, you can forgive him and give the guy a second chance at being a good human being. That’s fine and going further, that’s a good thing. Allowing him to become your boyfriend again is a whole other can of apples. A relationship is purely based on trust and so the instant it is broken like that, there is really no going back. Allie even mentions that she would never have known if not for the ex-wife calling and Sam basically confirms this as he admits that he wouldn’t have told her. So….what’s to stop him from having a moment of weakness again? I just don’t see how this could work.

Allie is clearly devastated by this betrayal to the point where she can’t really function without him for a bit. That’s concerning for a lot of reasons but going back to him isn’t the answer. So any scene that guy was in would definitely make me cringe. There’s really no good reason for cheating and any attempt to justify it just makes the whole thing worse and Sam tries to justify it with a straight face. Sure, I do believe him when he says he thought it was Allie at the end of the film and not the doppelganger, but it doesn’t really change anything for me. That guy was just bad.

I don’t like Allie much either for similar reasons. Aside from the whole rebounding thing, I also felt like she just let Hedra get away with too much. Allie had said no pets but quickly cracked anyway after Hedra brought a dog in. Later on Hedra insults Allie, yells, and acts like she owns the place. That’s when Allie should have kicked her out. The open flirting with Allie’s boyfriend was another red flag as well as the dog flying out the window. The instant the dog appeared I knew the film was going to take another turn for the worse as well. A dog’s mere existence in a horror film is usually the biggest death flag in all of cinema. It’s one of the aspects that will always end up holding horror films back from reaching their full potential.

Hedra? Well, she’s your average psychotic murderer. She has a hidden past that involves potentially drowning another kid although you learn the full truth behind that near the end or at least a good chunk of it. It’s reasonable to say based on how this is described that Hedra didn’t actually go that far. I was surprised at that myself but she still racks up a small body count by the end which was nearly bigger but she didn’t quite finish the job on one of them. There isn’t much to Hedra beyond that and nothing that really made her an interesting villain.

Then we have Allie’s next door neighbor Graham. He’s good, he always gives Allie some sound advice and helped as much as he could. It’s a little hard to buy how he lost to her in a fight though. Sam’s was also a little sketchy but you can pass that off as bad luck I suppose. Graham should have done better though as the whole situation was super sketchy and he was forewarned about her. That should have definitely been enough to stop her.

The climax is incredibly sloppy though. Now it’s not uncommon in horror films for the main hero/heroine to knock the villain down and instead of grabbing the gun just make a break for it but this movie does it around 4-5 times in a row which is absolutely crazy. I mean, if you have the villain on the ground then you absolutely have to grab the gun. Even if you don’t know how to fire it or something then you can toss it out the window or use it as a sledge hammer. At the absolute worst, just open the handle so all the bullets fall out. Otherwise you’re just letting the villain grab it again.

Allie could have played the whole thing way better than she did. Also, while she gets tied up off screen, presumably Allie let herself be tied up because Hedra had the gun. This is something you must never do. Okay, when the villain has a gun, the leverage is that they will shoot you if you don’t comply. If you’re in a hold up you freeze and do what they say because you’re giving them things with the expectation that you will walk out of there alive. This situation is massively different. Once you tie yourself up then the only real outcome here is that you’re going to die. You’ve just given the villain all the leverage with 0 upside to yourself. It’s better to make a break for the door and get shot in the back or (the better option) try to grab the gun and tackle the person. Sure, your odds are pretty high at dying but if you tie yourself your odds are at 100% without some plot armor to help you out.

So what I’m saying here is that you should never tie yourself up when held at gunpoint. Unless there are other hostages or something then this is just not worth it. More points away from Allie. Finally the only other character in the film is this random looney who desperately wants to force himself on Allie and there’s no reason for his inclusion except to try and give Hedra some points where she can say that Allie is too nice. I don’t think this is a case of Allie being too nice but just being way too oblivious. The guy was acting shady from the start and every line involved him flirting with her. So…staying back late at night to teach him something 1 on 1 sounds like a horrible idea from the start. This is definitely one guy where you don’t mind when Hedra confronts him because at least she’s not murdering some innocent person for once.

Overall, Single White Female is a film that is pretty unbelievable at almost every point in the story. You’re always going to be shaking your head at what is going on because it just doesn’t work. The characters range from bad to awful in most cases. The movie squeezes in animal violence for no reason and I wouldn’t exactly call the writing good. So it fails in almost every area which makes this a film you will want to skip. It’s just not worth checking out and the main message here is that Allie probably should have gone with one of the other roommates even if they seemed eccentric.