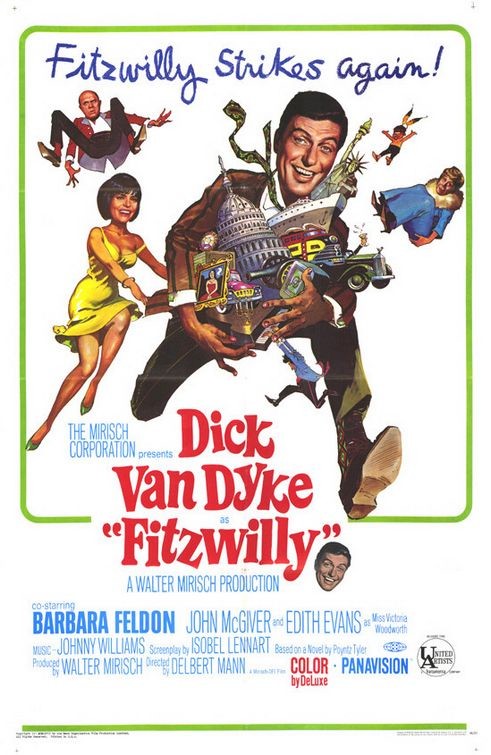 Fitzwilly is a very odd name for a film and the poster is rather crazy. At least you really would have no idea what you were getting yourself into here. It’s really a fun heist film all in all. The writing is on point and the cast of characters is fun. There’s just a lot going on here and the story keeps on changing and adapting as you go through it. I would have been on board with a sequel for this one to be honest.

The movie starts with introducing us to Fitzwilliam and his team. He works for Victoria, an old lady who is super rich or at least that is what everyone believes. It turns out that Victoria is not rich as her father didn’t leave her much of anything when he died. Fitzwilliam and the rest of the hired help don’t want her to feel bad though so they go around stealing to make sure that she is able to live the wealthy lifestyle that she is used to. Is this dubious? Well yes of course but at least they are stealing for a noble cause. You may not be rooting for them but it makes for an interesting dynamic. Well, one day Victoria hires a new secretary only she went out of the usual families and picked someone up from the outside. Her name is Juliet and she could potentially ruin the entire scheme. Fitz needs to find a way to get her out of here and quick but can he do it before she figures out that something is not right here?

Right away you feel like this will be a good movie because it just has a very calm vibe to it. The writing is fun and the pacing is on point. You immediately understand how all of the characters operate. Yes they’re crooks and I have doubts on whether they are really as generous as they appear to be at times. I’m sure they pocket some of the money for their own ends as well. Still, they don’t actually go around hurting anybody and steal from people so rich that they won’t miss the money much. It doesn’t mean you’ll be rooting for them because you shouldn’t be, but as they are not hurting anyone, it’s still entertaining to follow them on their quest.

Fitz is really a pro at this and it must have taken a long time to balance out his daily life along with his criminal empire. The guy even has time to always create an alibi for himself. The only time he seriously messes up is in letting Juliet stay. It’s a case of outsmarting himself where he was thinking of how this could really improve his position even more but erasing her doubts but the risks really outweighed the benefits this time around. She could have messed things up for them in dozens of different ways.

I do like Juliet quite a bit as the main heroine though. Initially she appears to have a strong sense of justice but then we learn her sense of romance is stronger. Yes, it’s a questionable moment for her but at the same time it was such a different reaction. I was expecting drama, running to the cops, and things like that but her actual response to his criminal empire is different than I had expected. She ends up having a really solid role here and the film just wouldn’t have the same level of danger without her.

Victoria is rather oblivious to everything but she means well. It would be a little hard to guess that she isn’t rich after a while though with the staff taking such great methods to keep her in the dark. I still feel like she should have known at some point though like checking her bank account. It’s the one….okay one of the many downsides of letting someone manage every part of your estate like that. She trusts Fitz a whole lot but as a result doesn’t even check over his work. I should think you would want to do an audit at some point. She keeps herself busy all the time though and that’s good since it means she won’t be bored.

Fitz has a lot of helpers but the only one that stands out in a bad way is Albert. This guy’s the easiest to crack when the going gets tough and he makes a really poor decision in the climax. There are just so many ways he could have handled that a lot better and it would have enhanced his character. Instead I would call his final move selfish rather than heroic and it simply isn’t a good look. In a way I had more respect for the rest of the staff who were on the take but weren’t dancing across the line so much. They knew where they stood and wouldn’t budge.

As I kind of hinted earlier, the romance is a bit on the weak side here though. It happens awfully fast all things considered and you feel like it shouldn’t work. Fitz started this whole thing as an act to push her away and so he’s not acting great throughout their dinner but Juliet doesn’t notice and the whole thing goes smoothly. Ultimately she falls for him anyway. The only part of the romance I do like is how she has his back right away after that since it’s fair to say that she knew the stakes once they were together but keeping the cat and mouse game a little longer would have been fun.

Where the film really shines is with the big mall scene at the end. The rest of the film was really fun and engaging too but this is the exciting climax that lives up to the build up. There’s a whole lot going on here and you have security getting involved as well. You couldn’t ask for a whole lot more than that here and Fitz’s plan was rock solid. It was really quite clever and while the film is part comedy so things are exaggerated, you can see this working to an extent. It’s really not a bad idea and when you have as many contacts as Fitz has, well that ends up helping out even more.

Overall, Fitzwilly is a really fun film. It’s one of those old time classics that will always age well because the writing/dialogue is strong and the movie has a good sense of humor. The characters are all written well and the movie doesn’t drag on for a minute. You’ll even get worried for the poor guy in Florida who is being pulled around by Fitz the whole time. Most of the movie wouldn’t have happened if Fitz didn’t make the big mistake of hiring Juliet in the beginning, but it shows that even someone as prepared as Fitz can make a mistake sometimes. It adds to the challenge and you’ll have a satisfying time watching this movie all the way to the end.