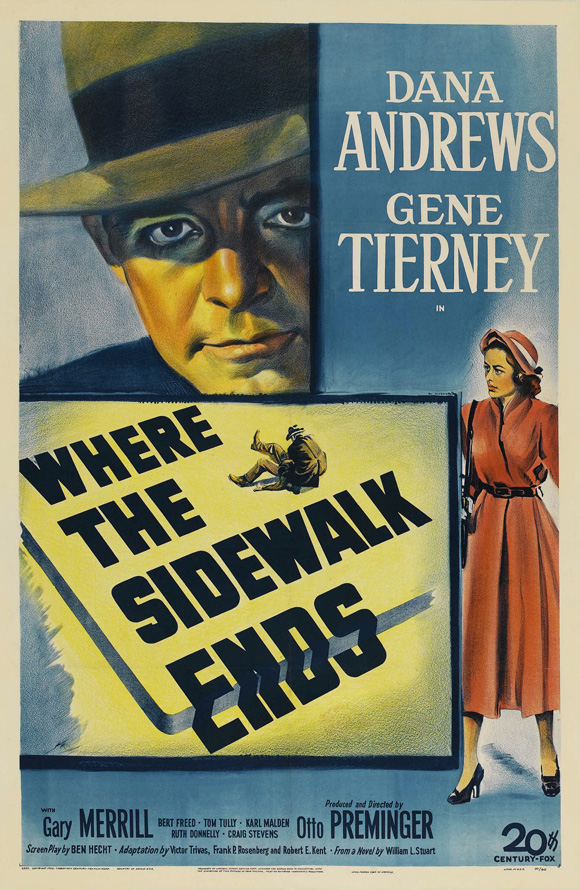 Next up on the review list is an old murder thriller. This time we really get to see what happens at the end of the road. It’s an engaging film that shows what happens when mistakes are made on every side and how this keeps on snowballing. I do like the idea of a hero trying to frame a villain. It’s something that doesn’t happen too often but is something to think about. Of course this is also morally dubious at best but ultimately the film has a satisfying conclusion.

The film starts off with introducing us to Mark Dixon who is really tough on crime. This is to the point of being excessive though as he tends to rough them up quite a bit during interrogation. He has now been demoted and warned to curb this behavior. Well, this will be difficult as he is wrapped up in another case when a rich man is stabbed to death at a local gaming arena led by some notorious gangsters. Of course the trick is that there is no real proof here and these guys have a habit of getting away. Mark ends up doing some interrogating anyway and ends up murdering Paine by accident as his punch hit the guy in a way where his metal plate shattered. Mark figures he’ll hide the body and then frame Scalise for it.

Unfortunately he ends up framing an innocent cab driver instead. Mark has grown close to the guy’s daughter Morgan and needs to settle this. Will he be able to get proof against Scalise or is this curtains for him? Additionally now that he has murdered someone, even if accidental, he is facing some issues as well. After all, fully attacking someone as part of an investigation was outside the mission parameters.

There’s a lot going on here to be sure. I was glad that the rich guy stepped in to protect Morgan when she was attacked but it is tragic since you know he never stood a chance. The guy was surrounded by gangsters after all and just wouldn’t have lasted either way. It’s hard to trust anyone at these high stakes gambling arenas, especially if it isn’t at a reputable venue. It makes for an intense opening scene as we know what happened and have to see how Mark will put the evidence together.

As a main character, Mark is solid. I do like his determination even if he lets it get the better of him sometimes. He doesn’t buy into the false stories as quickly as the other cops but ultimately there is a limit to what he can do as a cop. It’s not like he can just beat the truth out of everyone although he would certainly like that. His final attempt to frame Scalise was also a very bold approach as he was directly putting his life on the line. Not just anyone could pull that off.

Even Scalise comments on this and how Mark is crazy here. His obsession with taking down Scalise and defying his father’s legacy is certainly impressive. Unfortunately this isn’t a big James Bond action movie and so his big attack on the villain base doesn’t quite go as planned. It would have been intense to have seen him take them all down but realistically that would be nearly impossible without a gun or something like that.

As for Scalise, well he’s your classic noir villain. I’ll give him a little extra kudos for being intelligent though. He sees through Mark’s plans and also knows how to prevent evidence from getting out. He’s an old hand at this and isn’t your run of the mill gangster. While his personality may not be super memorable beyond the usual tough dialogue, this is enough where he holds his own as the main antagonist.

Finally we have Morgan and her father. I liked her Dad’s constant talking about how he helped Mark with a case back in the day. He just seems like a nice guy who is always cheerful and trying to look out for Morgan. Morgan makes some dicey calls with the people she hangs out with like Paine. Ultimately I don’t think she’ll be around those areas much going forward though and has developed quite a bit as a result of this experience. The severity of the case against her father gradually sinks in during the film and she doesn’t take this in stride but then the film shows the contrast of how she handles the news at the end of the film. She’s come a long way and won’t be blindsided anymore.

As a noir thriller kind of movie, this film always has some level of danger present. Whether it’s Mark trying to hide a body or quickly thinking up an alibi, you can tell that he’s never quite safe. It also works well in keeping your interest the whole time through. The movie’s fairly long but the pacing is on point so it never drags on. We see enough of Mark’s life to see what makes him tick and it helps build the world around the mystery. He’s certainly quick on his feet so it’s easy to see why he got such a high rank at the start even if he’s been on a bit of a decline since then with how he beats up the criminals.

Overall, This was a solid movie. It really builds a good atmosphere from the start and the adventure is interesting from start to finish. Mark makes for a good hero and Scalise ends up being a smarter villain than I expected. As a result you have some decent banter with them. The only time Mark goes too far is when he takes such a hard stance against his partner at one point. That was definitely the wrong move and showed him taking out his aggression on the wrong person. Even though the case may be solved, it is fair to say that this line of work may not be right for him. There really is nothing to prevent this kind of scenario from happening again because it’s fair to say that this case hasn’t really changed him. The ending is left up to interpretation on how it will go though so you can ultimately reach your own ending. If you’re looking forward to a good noir title then this is a good one to watch.