This review is of the edited TV-14 version of the film. All thoughts should be addressed as such as this review would be even more negative otherwise. 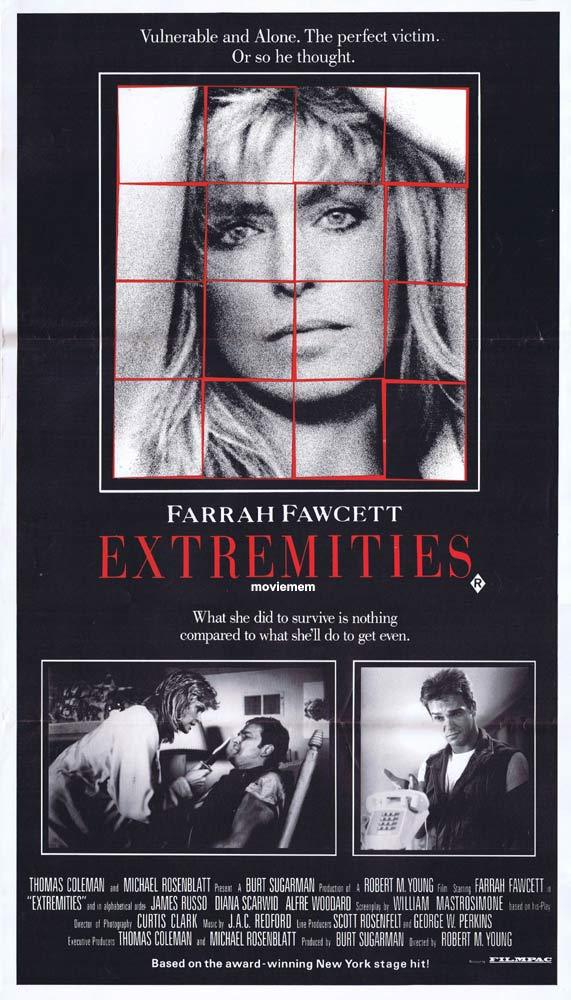 There are some films were you know they will be trash almost immediately and this is one of those. With nothing redeeming to be found in this film you know that you’re in for a rough time right from the jump. That said, the film is pretty straight forward about this so if you’ve even seen the plot summary then you know that this should be an instant skip. Extremities does its best to be as extreme as possible and succeeds, much to the detriment of the film as a whole.

The main character here is a lady named Marjorie who is assaulted one night by a mysterious figure. She tries to ask the cops for help but unfortunately there isn’t anything they can do to assist and the villain has her address. She heads home when the guy strikes again. Ultimately she is able to subdue him but her two roommates think he should be given leniency while she just wants to murder the guy or at least get a confession out of him. Will she be able to destroy him or will the roommates get in the way?

The movie certainly makes the roommates annoying as they try to fall into every horror trope imaginable. Believing the main villain, letting their guard down, etc. For a while there you think things are really going to backfire on them but fortunately the film at least doesn’t go with the whole he escapes into a whole new climax filled with lots of fighting. That would have been rather pointless and would have only served to drag the whole film out even more.

The movie moves at an incredibly slow pace. The first 30 minutes feels like it’s 3 hours. The scenes just never end and I can’t imagine seeing this kind of movie in theaters. Then the whole second half doesn’t need to exist as Marjorie should have finished the guy off already. Just end him immediately and you don’t have to worry about the debates and aftermath that follows. Because that didn’t happen you have to go through scene after scene of the characters debating.

Everything is really detailed in this film including the actual assault and rape which puts this film at a 0 right out of the jump. This is never a plot device that should exist in a film, much less be the main plot point. Just including that doomed the movie and there was no way the film could salvage itself after that. It just makes for a painful watch. The home invader plot is already a tough storyline to tackle because it will almost always devolve into a long hostage situation and this just takes the whole thing one step further.

With this kind of plot there is no way to make a movie good. It’s absolutely impossible and thus shouldn’t even be tried. The villain’s awful and as far as I’m concerned the roommates are awful for taking this guy at face value at all. C’mon now, this guy’s rather obvious the whole time. This is one of those films that is transparently putting the main heroine in as bad a position as possible so that when she starts getting her revenge and torturing the villain you can cheer along.

The issue is that this cycle of violence will always make for a poor viewing experience. For starters, it means that the villain is going to do something truly awful at the start to make the revenge feel that much better. This is a really bad decision. Then you will have the hero doing something really awful like full on torture as well to even the scales. So in effect it’s an excuse by the film to have two super violent moments and to just keep going in circles like that. It goes without saying that this film is very violent and dark as well so keep that in mind if you actually end up wanting to check it out. Trust me, you don’t want to watch this one though, you could do better with numerous other films. It’s no exaggeration to say that 90 minutes of watching paint dry with some fireplace sound effects in the background would be better as it would at least put you to sleep.

Overall, Extremities is an absolutely awful film that is horrible from start to finish. It’s the kind of film that’s so bad that you just want to forget about it rather than even discussing the film for very long. If you ever see this on TV or in a store you’ll want to keep on walking right past it. If you hear about a remake being in production and a trailer pops up on Youtube feel free to leave a dislike if the feature has been brought back onto Youtube. You’ll have a better time buying a bag of potato chips and mixing it into your mac n cheese or dusting off the old Sega Genesis and playing some old games there. Either way that would be a more ideal way to spend your evening.