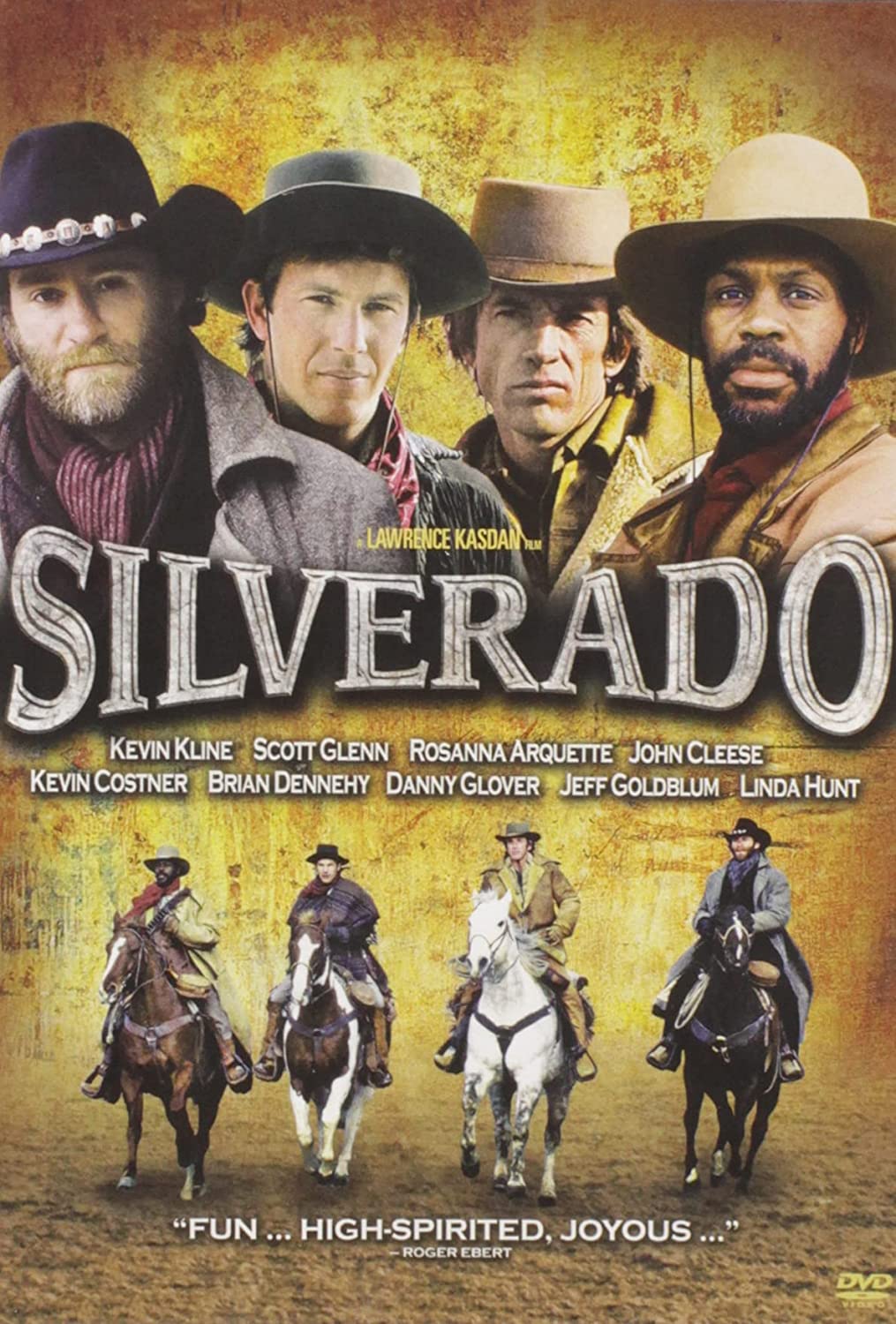 It’s time for a fun Wild West film and definitely one of the best ones in the genre. We get a cast of likable characters and there’s a good amount of action here. The film’s fairly long and so each character gets their own character arc journey. By the end of the adventure you will have had a good time. Whether you’re here for the solid writing or the fights, you’ll get what you’re looking for.

The film starts off with Emmett taking out a bunch of thugs and seeing that a man named Paden was almost down for the count. Emmett helps him out and then they collect Emmett’s brother Jake. They are saved by Mal after leaving a corrupt town and these 4 have something in common. They’re all going to Silverado. Whether they’re going for revenge, family, a job, they’re all going to the same place and this could pit friend against friend. Will these 4 be able to each complete their objectives or will they end up faltering?

As the characters are a big reason why this film is so good, lets dive into them right away. First off you have Emmett who is your classic wild west main character. He’s a great shot and has a lot of confidence as well. He’s smart on the uptake like when he tricks the sheriff into thinking that he won’t make a move so you have a very complete character here. He also didn’t hesitate in saving Paden as well which shows that he is a good person at heart too. That’s the kind of main character you can root for. I would also say he is probably the strongest fighter in the film which is why he had to be sidelined for a good chunk of the climax. It would not have gone too well for the villains otherwise.

Then you have who is probably the weakest of the 4 character-wise but in terms of skill he holds his own. He’s quick to fight back like at the bar when he wanted his hast so I can definitely respect that. I was less pleased with how he handles the situation once he has his job though. There’s some blackmail involved of course and a hostage which does stay his hand but one character gives Emmett some advice which I thought was rather obvious. Can’t have a hostage or blackmail if the person is no longer alive right?

I mean, in most films that’s not an option since heroes don’t murder and all but in the wild west that’s never a concern. All of these characters have murdered tons of opponents who got in their way and this villain’s as rough as they get. None of the main characters would lose much sleep if he’s gone. I thought it was a bit much that Paden didn’t come to this conclusion on his own and it’s just annoying seeing Paden just let his friends get beaten and interrogated without helping. It shows me that you can’t count on the guy which hurts him quite a bit.

Then you have Jake who is Emmett’s brother. He’s as confident as can be but isn’t quite as smart as Emmett and tends to get himself in trouble. Jake’s got a bad habit of messing around which is always getting people upset and not much you can really do once you’re arrested. Jake does have one good plan he uses near the beginning of the film though.

Finally you have Mal who has more of a quiet confidence about him. He’s not going around bragging like the others but is quite good at his gun skills. He saves the heroes at one point as well. His father is being bullied out of his land and so Mal has to put a stop to this and take care of the villains. His plot ends up being more of a revenge story due to how things play out and has the be the most serious plot of the bunch. Mal definitely does well in firing the others up for the big climax.

So we’ve got a lot of fun heroes here. I can’t say that I liked any of the villains but it would be really rare if I did. Wild West villains are usually guys you just want to be defeated pretty quick. McKendrick is the main villain here who basically rules the town with an iron fist. He’s rich so nobody dares to mess with him and all of the mobsters and crooks are in his pocket. His biggest mistake here is getting greedy and fighting off all these new characters. He should have just been content with what he had and maybe things would have ended better for him.

The writing here is on point and all of the characters are always reasonable. My only issue is when the villains show up and tell the hero to drop their gun…that should never work. Lets take one scene as an example. Mal is tricked by one of the townsfolk into heading into a trap. Mal arrives there where the villain walks out with a gun. Mal should have immediately taken him out there but instead he lets the guy talk as some more guys show up. At any of these points, fighting them off with a few quick shots seems like it would work and it’s only out of each once the villains have him surrounded.

If you’re in the wild west and the villains all have guns, there’s no way you should drop yours. At the very least you die on your feet while taking some of them with you. This is something I can’t help but notice in many films but it’s especially noticeable in wild west titles because of how everyone’s using guns all the time.

One reason this film beats a lot of the classic wild west titles is because the film focuses on the fun banter and good fight scenes the whole time. Usually the genre ends up making things rather gritty or just reminding you that it’s the wild west with animals being shot all around. This one really manages to avoid those things for the most part and it’s just fun.

It would have been nice to have really gotten to see the 4 characters fight each others but maybe it’s for the best that this didn’t happen because I would probably have been bashing the characters that sided with the villains. There’d just be no excuse for this and it’s why one of the heroes cut things really close there.

Overall, Silverado is a pretty solid film. It’s really got a good story here and quality characters. Seeing why everyone wants to get to Silverado is cool and it adds an extra element to the film. They’re all travelling together but what if one of them is more of a villain and the reason for getting to Silverado isn’t so great? Well, all the more reason to check this one out.