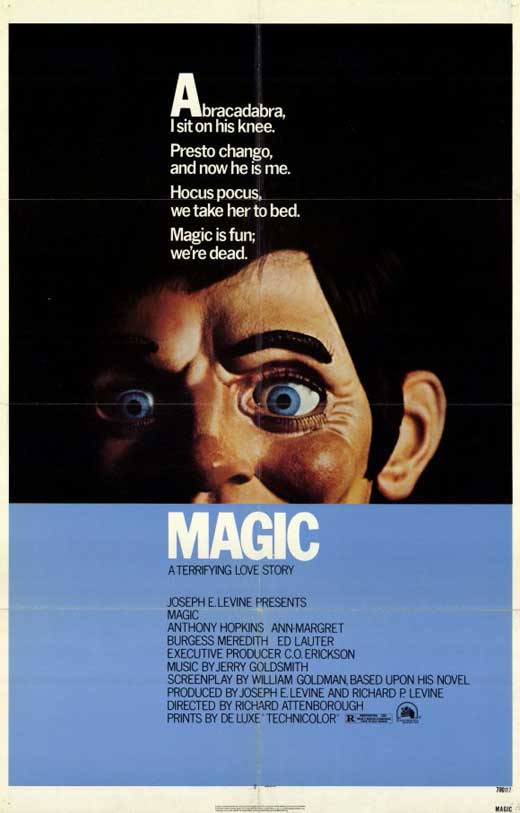 Magic is a film where the main character is acting really shady from the start but nobody ever notices the red flags until it’s too late. As a result the characters are really in a jam here. The puppets always make for interesting characters but with this film it feels like this is all a hallucination which takes away a bit from the supernatural factor. You could make the case that the whole thing is in his head which isn’t nearly as fun.

The movie starts off with Corky messing up at another comedy show gig with his crude puppet Fats. His mentor Merlin just tells him to keep on trying and he will get it. Eventually Corky does become a star and he is super close to making it into the big leagues. Unfortunately in order to secure his TV gig he has to go through a medical checkup and since Corky knows that he is insane, he declines. His agent Ben wants to help Corky get past this but Corky runs off to a very remote area where he meets his old crush Peggy. He figures this place will be good to hide and maybe he can win over Peggy even though she is already married. Will his insanity prevent Corky from having a happy life?

Even if Corky wasn’t crazy I would still have to root against him though because Peggy is already married. I get that he likes her but once someone is married you really have to let them go. Nothing good will come from trying to go after someone who is already married. Corky’s just not a likable character though. Look at how quickly he blows up at his agent Ben despite the guy doing his best to try and get him on the show anyway. Ben even called in all of his lawyers and they did their best. Ben was the only one who really had Corky’s best interests at heart the entire time yet Corky just didn’t care.

Additionally, Corky wasn’t even nice to Peggy early on. When he messes up on one of his early tricks he starts threatening her and you almost think he was ready to murder her there if the trick didn’t go over well. Corky is really the main villain of the film and it’s always tricky when you have the lead as the villain since you can’t exactly root for him. This doesn’t end up working out here and the only way he may have even stood a slight chance is if Fats was definitely a separate entity. I wouldn’t say that the film really plays it out that way though so in the end you have to blame him for everything going on.

Even if Fats was a real character I wouldn’t have liked him much though. The guy is always being really crude which is really the extent of his character. He will always be making cracks to get some easy laughs which the characters always find funny. Fats is always egging Corky on but doesn’t help much. I suppose he does get one stab in near the end. He’s certainly no Chucky or Talking Tina in terms of the scare factor.

The best character by far was Ben here. I’ll give him major points for at least trying to help Corky out the whole time. He never turned his back on the guy and through to the end he was going to go and look for some help. You knew he was doomed in the film but the whole time you were hoping he would somehow pull off the escape and get out of there. Now that would have definitely been amazing. All things considered, the guy did put up a pretty good fight even though he was taken by surprise and in a weakened state.

As the main heroine I can’t say that Peggy was particularly good either. She should not have entertained Corky from the start and cheating is never the right move. Duke may not have been a great guy so in that case split up first but don’t start another affair in the meantime. I also didn’t think she picked up on a lot of the red flags like with Corky threatening her early on. You’d think that would have been a dealbreaker but it didn’t really seem to leave a big impact on her at all.

Finally you have Duke who is definitely a bad guy from the start. He acts all tough when it’s a fight that he can win but at no point in the film do you feel sympathetic to him at all. He’s just not a good person and any scene with him in it is another one where you are rooting for the guy’s scene to end already. The film certainly doesn’t have the strongest cast since I would say only one character here is good.

Naturally I wouldn’t say the writing is great either. The characters don’t tend to act very realistically as described above. The only scene where I would give some good props is the stare down with Corky and Ben where corky had to try and make it 5 minutes without talking. I thought that was handled really well at least. The scene did a good job of showing how Corky just couldn’t keep it together by this point and how serious the whole thing was.

Overall, Magic is a film you can safely skip. It sort of defeats the purpose of its own story by not having Fats actually move around and cause damage. Having Corky be insane instead isn’t nearly as interesting and of course it does mean that the lead is no fun to follow around. I would have preferred to have at least seen more of the comedy acts even if I didn’t find him to be all that funny. I do think comedy shows in general are tough since you have to try and make people laugh but how often are the audiences going to be super engaged? When you’re trying to be funny is often the hardest time to get people to laugh. Ironically a little more magic could have helped this film.