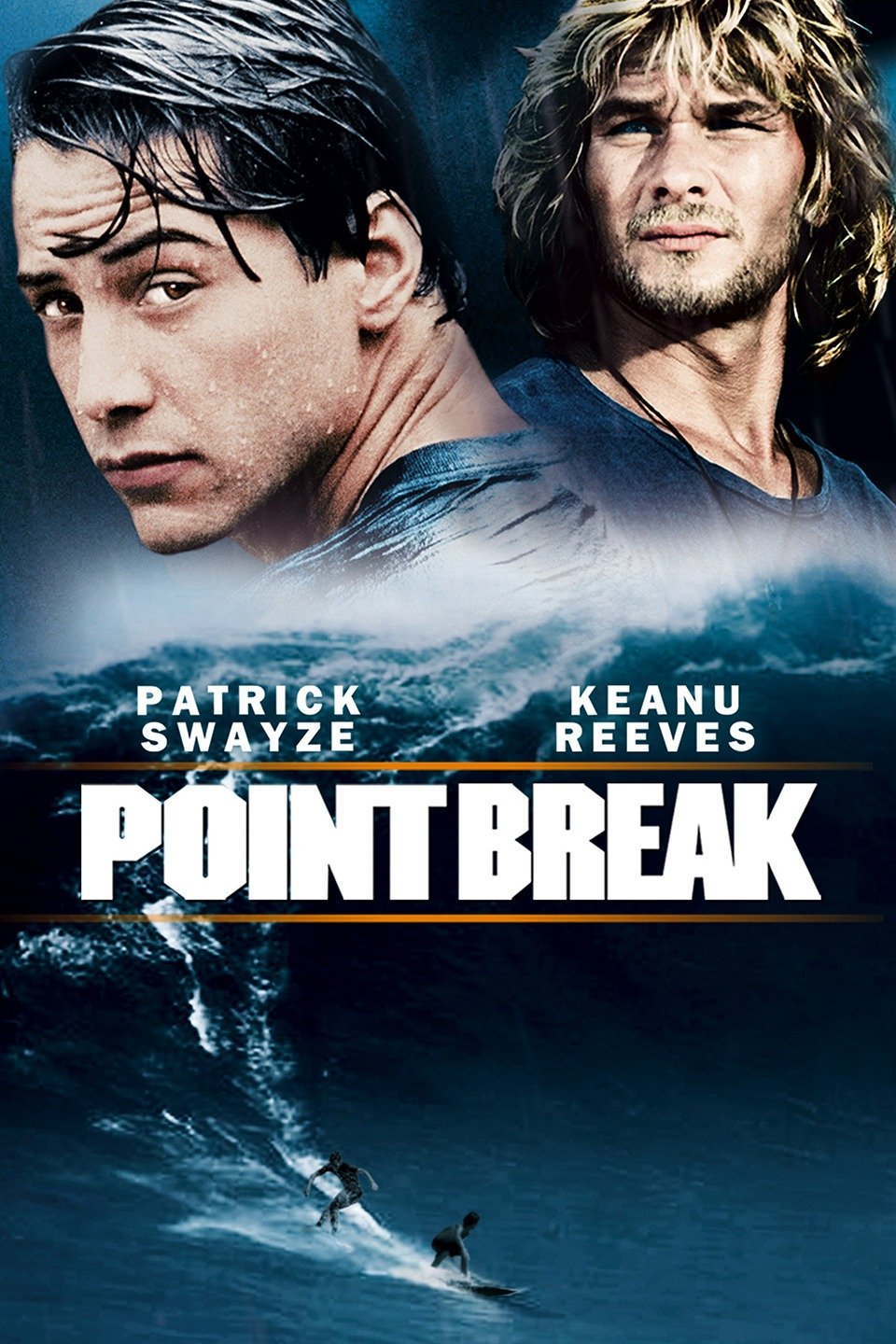 This is definitely a film I knew about for a while but only the bare minimum. It’s nice to check this one off the bucket list and it certainly has some fun ideas. Ultimately the film does have its share of negatives though which keep it from going into the green. As a result I’d place this one right in the middle. It basically cancels itself out at every scene but makes for an entertaining watch as a result.

The movie starts with the U.S. former presidents robbing yet another bank. They’ve hit dozens of banks at this point for years and nobody has ever caught them. Now I should say that these aren’t the actual presidents but merely thieves who wear the masks resembling the old presidents. Well, the FBI have a newbie on the team named Johnny Utah and he is determined to crack this case. He convinces his senior partner Angelo to tell him everything and the guy reveals that he thinks the villains are actually a bunch of surfers. Naturally the idea seems crazy but it’s the only lead so Johnny has to learn how to surf. He quickly meets a team of very close knit surfers and the main one is a really good fighter. Hmmmm…maybe he’s on to something.

The classic going undercover routine is always a classic. It’s definitely a tough job to be sure since your cover can be blown at any time so it’s a high risk. Especially since Johnny is actually working in the field as an FBI agent in the same area. If anybody recognizes him then his cover is blown. Fortunately for Johnny he is a smooth talker and he used to be a big shot quarterback so that helps his cache with the guys that he meets. After all, what are the odds that a quarterback would go on to become an FBI agent right? It just seems to random that nobody suspects him at all.

Unfortunately, maybe in part because of how new he is to this, Johnny can be a bit sloppy at time. Case in point, there’s a moment where he is having his quick affair with the main heroine and of course he just so happens to have his gun and ID hanging around. You probably should have that kept extremely secure. I would also argue that while you want to get close to the suspects you probably shouldn’t start any kind of romantic affairs with them. It’s the biggest reason these operations tend to end in disaster because the main character gets too close to the case. It also means you have to start lying a whole lot more frequently and people are bound to get hurt.

I also think the whole thing was too fast to be a true romance. Johnny barely even knew Tyler by that point. She helped him learn how to surf which is great but that’s about it. He should have kept to himself a little more which would also give him more time to process all of the information that he was getting. You can blame some of it on Johnny being new to all of this but some of this is just common sense. He often ends up putting himself in worse and worse circumstances as the film goes on.

I do like his ability to remain cool under fire though. At one point in the film he knows that they’re onto him and they certainly know that he knows, but both sides play it cool. They decide to go sky diving and pretend that they’re having fun even throughout all of the tension. The shoe eventually drops on this and they all have to go back to reality but I thought that sequence was handled fantastically. It’s one of the better moments here.

So Johnny made a lot of mistakes and I wouldn’t call him a great lead but he’s fun. For example, I disagree with his final decision to let someone have their last request. I know that accepting a last request is a big deal but sometimes I really think that you shouldn’t give the guy the satisfaction. This is one of those ties without a doubt.

The main heroine Tyler is okay. She’s good at surfing which is very important in this film. She’s gotten in with a fairly bad crowd though and it’s probably hard to get out. That means things don’t really go very well for her in the film. Tyler’s not as far off the deep end as some of the other characters though. For example, Bodhi’s the main villain here and you can tell that he’s not quite right. The thrills mean far too much to him to the point where he has been completely consumed by them at this point. He’s no longer in it just for the surfing but to keep on topping himself.

I think if he had kept to the plan and not done any showboating then he would have ended up as a better villain. Once he started going overboard and just blaming this on Johnny or chance is when he got weaker. What I’d have done would have been to have had the group escape after handing the hostage over and making a clean getaway as always. They would have then all perished in the big waves that came through. It may not have been a very satisfying end to the heroes but I think it would have made Bodhi appear as a villain who was quite genuine in his motives. That wasn’t the case though so I didn’t end up becoming much of a fan of his.

Angelo’s a good character for the most part but has one scene that approaches the point of parody. He’s supposed to be the smart one of the group who’s always ready for action and yet he is so dismissive of the possibility of catching the crooks that he slacks off while on a stake out. He’s more interested in getting his sandwiches and a drink than actually keeping watch. When a vehicle pulls up to the bank he doesn’t even give it a second thought.

This is absolutely something you’d have seen in a comedic parody but it’s played straight here. Angelo should be blaming himself throughout but instead shifts this onto Johnny later on. If Angelo had taken this more seriously then the film might have ended a whole lot sooner. He blew it there but it’s a funny scene because of how crazy the whole thing is. It really takes you by surprise.

Finally we have Ben who is a stand out character. He’s Johnny’s boss and is always giving him grief about everything. I like how direct he is and the guy seems to try and be a jerk from day 1. In his first scene he’s already being mean for no real reason. He’s so over the top that he ends up becoming a fun antagonist. He’s not going around committing crimes or anything but he might as well be with how he’s handling all of this. He’s not exactly making any waves in the case either but always comes in to assign blame. Shoutout to the undercover cop at the final bank though. That guy really did a great job, he certainly took out more opponents than I was expecting. I ended up liking him quite a bit even though his role was so brief. That’s a perfect example of how you make the most of your opportunity.

The film keeps up a solid comedic tone throughout which makes the pacing good. That said, the script is one of the weakest ones I’ve seen in a while. Apparently becoming a sailor pretty much means talking like a sailor the whole time so the main characters are just swearing like they’re in a horror movie at all points. It’s incredibly overdone to the point of being a bit distracting. I’d say that could have definitely been improved here.

As mentioned, the romance is also on the weaker side here. It’s just extremely rushed and doesn’t really make much sense. I don’t see it lasting beyond the film either once the characters have all calmed down. It’s hard to forget about things like that. A sequel could have been interesting with how this all turned out though. Johnny’s role would have certainly been different.

Overall, Point Break really embraces the craziness of their plan to take the villains down by becoming a surfer. The best scenes are when the heroes are messing around with the boss and just causing a lot of trouble at work. It’s a film where you should be grinning for a good chunk of it. I also don’t think it would be very hard to make the film better either. Scale back the romance, improve the writing, and maybe take out some of the surfing scenes for other sports and that could work. For example the sky diving was a lot of fun and I did like the quick football game. Maybe even show more of the robberies since we didn’t actually get to see those. At the end of the day Bodhi blew it for his team but that’s the way it goes for villains sometimes. They just lose sight of the forest for the trees.