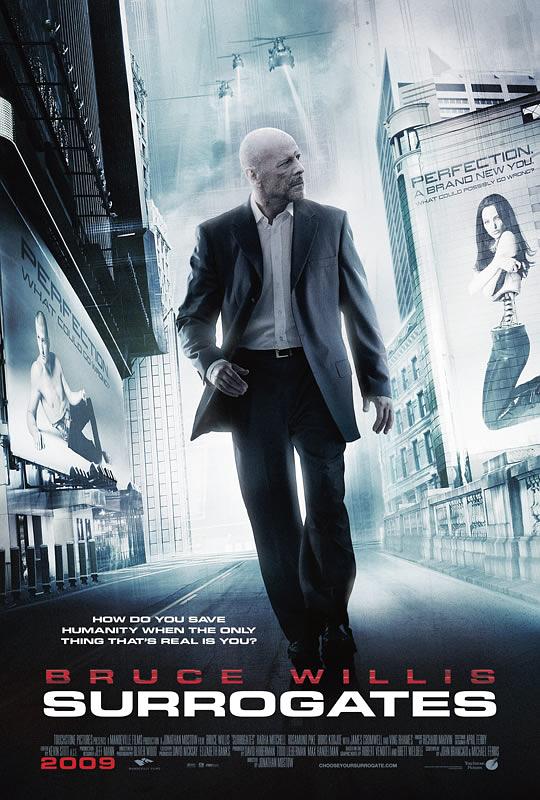 Surrogates is a pretty interesting take on a world where robots have become the new in thing. It gives a good amount of time to tackling the prospect of this even if I find it hard to believe that this would ever become the norm or that one company could possibly be the only one that can make them. Still, while you’ll be suspending disbelief throughout the whole film, I think it’s safe to say that you’ll have some fun with this one.

The movie starts off by explaining the situation. So one company was able to find out a way to make robots that you can mentally link too. So you buy a robot and then you can stay at home while the other “You” heads outside to buy supplies, go to work, etc. It can feel everything you can so it really feels like you’re out and about but now you can always use a young robot so that you stay in your prime 20s as opposed to looking like you’re 50. By and large people have all begun using these to the point where the crime rate has dropped to being almost nonexistent now. The world has finally achieved global peace. There is just a small faction of humans who oppose this and have created little communities in each state where only humans are allowed.

This peace has lasted until now but one day a robot is murdered and somehow the owner is destroyed along with it. This was supposed to have been completely possible but now this peace may be ripped apart in an instant. After all, if the owner is at risk then the whole surrogate system just got a whole lot more risky. Tom is on the case but along the way he sees just how dependent people are on their surrogate robots…and he doesn’t like it. Will this journey cause him to rethink everything he thought he knew about the system?

Of course the danger gives us a plot to chew on as the film goes through but for the most part I’d say this movie is really about taking a look at how things would really play out if this was the case. In some ways the film probably has it right that most people would jump on board with this and you would just have the resistance saying that it isn’t quite right. Having a robot would just be too convenient for most people to ignore. I do think the real forms of the humans should have looked way more overweight and out of shape though considering how extensive this is.

In the film we see how people use their surrogates to walk around, go to work, and even to be used inside their own house. It’s so extensive that having a real person walking around outside is a pretty big deal. So unless the humans are vigorously working out every day after work (Which seems very doubtful) I don’t see how their health would last for very long at all. We can assume that other technology was built in order to keep everyone fit but that would be a massive assumption considering that it’s never mentioned at all.

Additionally, I don’t think surrogates would achieve world peace. Far from it, I could see it accelerating things because people will be more detached from life. It’s almost like you would be living in a video game at that point as you’re controlling robots which can move at superhuman speeds and have super strength. We see this with Tom’s character as he chases down a human. The robots are able to do a whole lot so people wouldn’t be tempted to use this for crime? I just really don’t see how this would make the world more peaceful, certainly not on its own.

It was fun to see the human resistance though and I thought that side of things was fun as well. I 100% could see such settlements becoming a big thing although it’s almost hard to imagine them being left alone to live a normal life in a world where every country has united like this. I’m glad that they were left alone for a while here. Now there is a twist that undermines one part of the movement but I like to think that most of the characters here were on the level and actually didn’t support the robots. It would be kind of ironic if they all owned surrogates as well though. Would be like someone saying they don’t use the internet but they just so happen to have a smart phone.

For the story itself, the mystery’s pretty decent. It’s a very by the books kind of film with regard to the plot though so I wouldn’t say that it sticks out or anything. The cast isn’t very large so the suspects are limited in who’s really responsible for all of this. There’s corruption as always and it’s hard to trust anyone. You’ll be invested in the film well enough to see it through to the end though. There aren’t a lot of action scenes or anything like that but we do have a fun chase scene. As a side note, the surrogate they chose for Tom is fun. You immediately know that it’s Bruce Willis because of the facial expressions but that wig is crazy.

Tom’s a decent character but he does tend to fly off the handle a bit. The scene of him beating up the random guy at his apartment was certainly an odd one that’s for sure. I do think he makes the right call in the climax of the film though. The rest of the characters aren’t likable even if I wouldn’t call them bad. They aren’t given much focus though and we don’t even know much about who they really are because of the whole robots angle. Tom’s wife seems to be going through a mid-life crisis as she uses her younger robot and prefers not to use her real body at all. She also hangs out with some friends that are rather crude and doing drugs.

Those guys were definitely the weakest characters here. You’ve got Tom’s boss who never has his back when it counts and the prophet who is always talking a lot but doesn’t seem like a very nice guy. The film may have a bit of a jaded view of society here as everyone is really only working in their own self interests. Aside from Tom, nobody really seems interested in good ole justice or doing much of anything. The military is the only one who takes Tom seriously about this gun that could hurt people and seemingly it’s only so they could have it in their possession.

I do question why nobody else was as big onto this case though. Think about it, the world is now populated by the Surrogates to the point where almost everyone uses them. If you’re the only guy with a gun that can take them out and the owners in one shot, would that not be the most valued item in the entire world? I would think everyone would be scrambling for that. Of course this does lead me to one last moment of disbelief.

There’s no way that only one company would have this technology. Someone would steal it and make their own version or reverse engineer the code. You’d have a ton of different companies manufacturing this. I’d go one step further to say that if one company figured out how to make a gun that gets through the defenses, more would as well. This is all very convenient to work towards the ending of the film but I’m not buying it. It’s a bit of an issue with the writing since the entire film revolves around these two truths. That there is only one gun and only one company. With any more then the ending falls apart so I don’t think it stands up to close inspection.

Plot holes or things that don’t make sense aren’t the kinds of things that really hurt a film though. What keeps this film from being higher is that it really ends before the concepts can be explored further and the cast isn’t that good. It’s hard to root for almost anyone here. Tom’s good but even he has his random moment where he attacks that random robot and makes himself look bad. The scene of the characters doing drugs also just felt really out of place. More action scenes could have spiced things up but as this isn’t that kind of movie, I think just giving us some more good characters and expanding the scope of what we see could have worked. It’s not a concept that is easily to dive into even with 2-2.5 hours but there’s still more that could have been done with it.

Overall, Surrogates is a fun film. I think it could have been even better with a longer length as we see more of the effects that this has on the society as a whole. Of course who wouldn’t want to have a robot right? The downsides would likely still outweigh the positives and the film certainly seems to take that stance as well. It makes for a fun hypothetical and is probably one of the better dystopian settings that I’ve seen in a while. Certainly feels more realistic than the Hunger Games or Divergent at least. If you want to look at a possible future timeline, this is a good one to check out.