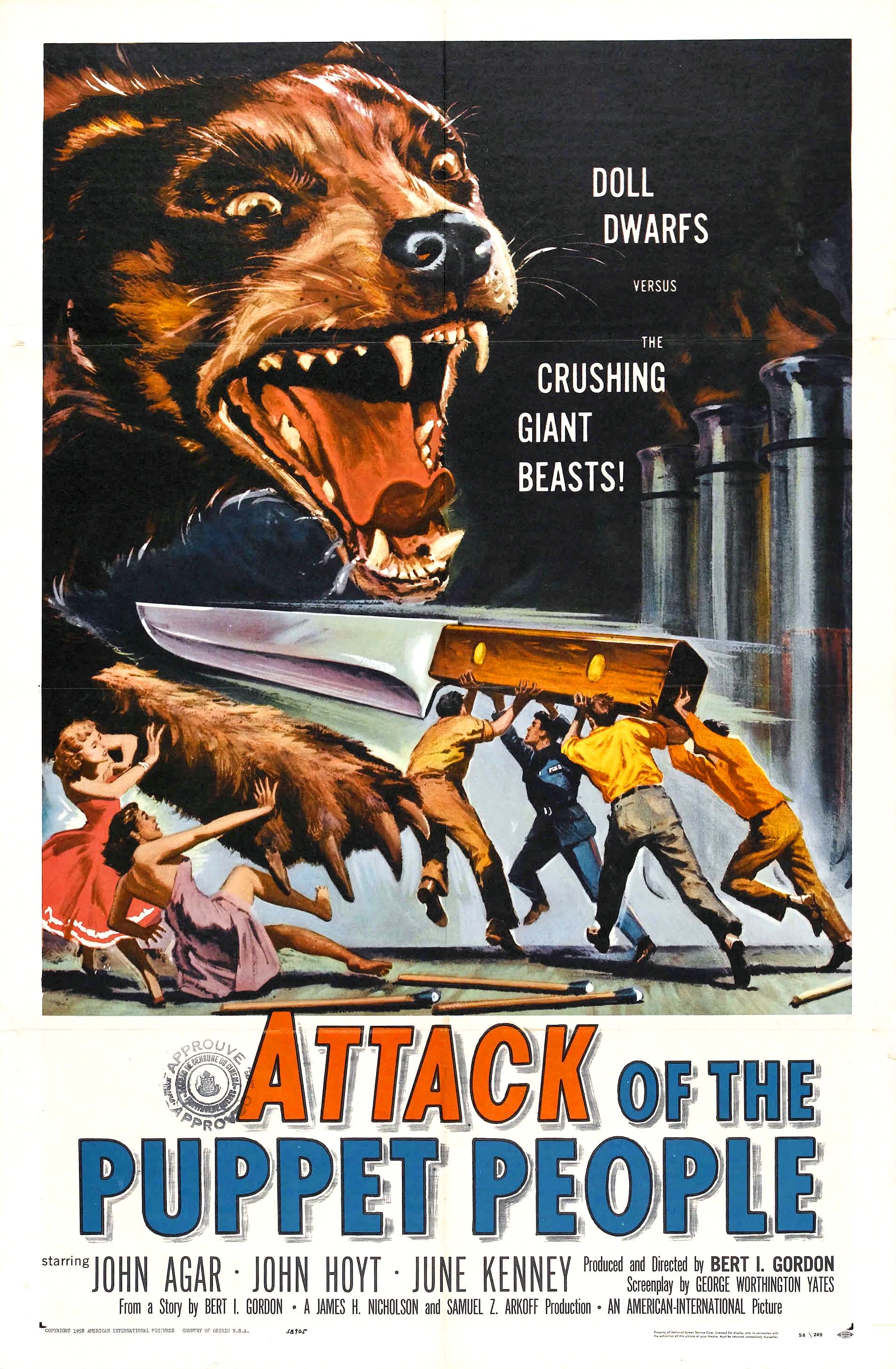 Attack of the Puppet People seems like a misleading title to be honest as they aren’t the main antagonists here. Maybe “Night of the Living Doll” or something like that could have worked instead. Still, this is a fun film and you’ll get a kick out of it. Some of the character’s reactions may not make a whole lot of sense and one character is extremely slow on the uptake but ultimately it’s a unique premise that’s executed rather well I’d say. The movie has strong fundamentals and never wavers.

The movie starts with Sally heading to a doll store where there was a help wanted sign. The owner (Mr. Franz) is so delighted to have her start up that she is a little taken aback. Perhaps this is not the job for her? Well, Franz is quite pushy so in the end she relents and starts right away. The job’s pretty fun for a while and she even meets a salesman named Bob and they get serious about each other. Bob even asks her to marry him but then he mysteriously vanishes the next day. When Sally goes to work she sees a doll that looks just like Bob (Smart move Franz….) but can it really be him? Sally then realizes that the other dolls look like other people who have vanished such as the previous secretary and mailman. Could Franz be turning people into dolls? Sally sure thinks so but how can she possibly prove this? It will be difficult indeed.

Part of the issue is that this story sounds crazy to anyone who hears it. How can you turn someone into a doll? That doesn’t make sense and sounds like something straight out of a Sci-Fi movie. The Police Sergeant that she talks to is a huge skeptic for sure. He does realize that quite a few people have vanished recently but figures there’s nothing about this that links it to Franz just yet. The guy does a little digging but misses on every single clue and is always in the right place at the wrong time. Ultimately you can’t count on that guy to help very much at all. He seems like a nice guy but not a useful one.

As for Sally, well she’s okay and at least she figured out what was going on quickly. My main issue with her is that she can be a bit of a pushover. She really lets Franz talk her into accepting the job and then doesn’t even realize as he locked the door behind him. She should have dashed out after the Sergeant. After all, she just claimed him to be a kidnapper so even if the cops didn’t believe it, there’s no way this would end well for her. She should have ducked out immediately.

Franz is the main villain here and not the smartest guy. First off, Sally would not have even suspected anything if he didn’t have the new doll just sitting there. Why wouldn’t the villain keep all the human dolls in hiding and only display the actual ones? From what we saw of the shop, he has no shortage of those so lock the human ones somewhere safe and display the fake ones. Case closed and that would have made him a lot harder to track. I’m convinced that this guy wasn’t very good at the villain game as he also gives the humans a lot of freedom while he’s outside and underestimates how much they want to be free. You can see how he is a bit crazy as he thinks the people really like him and he even tries to get them to sing to him but ultimately that’s his undoing.

For a good chunk of the film the characters are dolls so that makes for an interesting dynamic. Knowing that you could be put into suspended animation at any point has to be rather terrifying. You’re rarely ever truly safe at that point. One doll for example was kept in stasis for months so she barely knew what was happening at first. When your life is completely dependent on the whims of a random villain like this, then you definitely want to get out as soon as possible.

I think you do have to play it cool at some points like when they were first awakened, but otherwise you have to try as many plans as possible. The phone plan was a good idea and same for the trying to turn back to their adults form moment. Ultimately the heroes tried a lot of options which was good but they’re inherently at a huge disadvantage just due to how small they are. There’s only so much that you can do at this size.

The movie also has some fun humor. Franz has a best friend who is always coming over to talk. It was nice how that guy would always come with the worst timing and slow Franz down. Usually you see that happening a lot to the heroes so for once the roles were reversed here and the villain is the one who had to deal with this. That’s definitely something that’s a little different. The friend also really meant well and seemed like an earnest guy. Too bad he didn’t have better friends.

It is pretty interesting to see what life could be like if you had to live as a doll. Even if you take away the suspended animation part I don’t think it would be a good deal though. Just about everything would be dangerous. One of the captives says that a plus is not really having to do anything. You just get to walk a bit, have your free meal, and do some entertaining. The issue is that you really do feel like a toy after that. I can see wanting to be super tall like a Kaiju or something but even then that would only be good if you could shrink afterwards. Otherwise no deal.

The plot may be rather low key but the writing is what really helps it be entertaining. The main characters are good and Franz makes for a solid villain. There’s one scene where he forces Sally to act in a play but I thought the whole “jump scare” where the doll turns into Hyde didn’t seem as intense/scary as they tried to make it. This ultimately leads to Bob beating the doll up but I didn’t really understand the big reaction. The doll was a little scary sure, but I didn’t think it was That scary.

As a final note, I do think the Sergeant was really pushing it here. When he saw that Franz was hiring yet another secretary as the last one “Went abroad to go find her fiancé” that should have raised massive red flags. That would be another disappearance and yet the cop doesn’t really think twice about it. He accepts the guy’s word right away. Even if you don’t buy into the supernatural element, what about the possibility that this guy is just kidnapping people the old fashioned away? There are too many people going missing for this to be a coincidence. Ultimately it ends up being the main character’s responsibility to help take this guy down but it would have been nice if they had some kind of backup.

Overall, The poster may not be very good for this film but the execution is. There’s even a quick scene where the characters are watching a film and it’s nice and meta since there were quite a few similarities in that plot. It felt kind of random but the scenes they chose in that film were definitely entertaining so that worked out well. I also thought the characters were good. One of the captives seemed to have gotten used to this life too easily but the others were totally faking it so that helped even things out. The writing was good and the film was fun so in the end that’s all that counts here. It ended up being a fun ride.

2 thoughts on “Attack of the Puppet People Review”