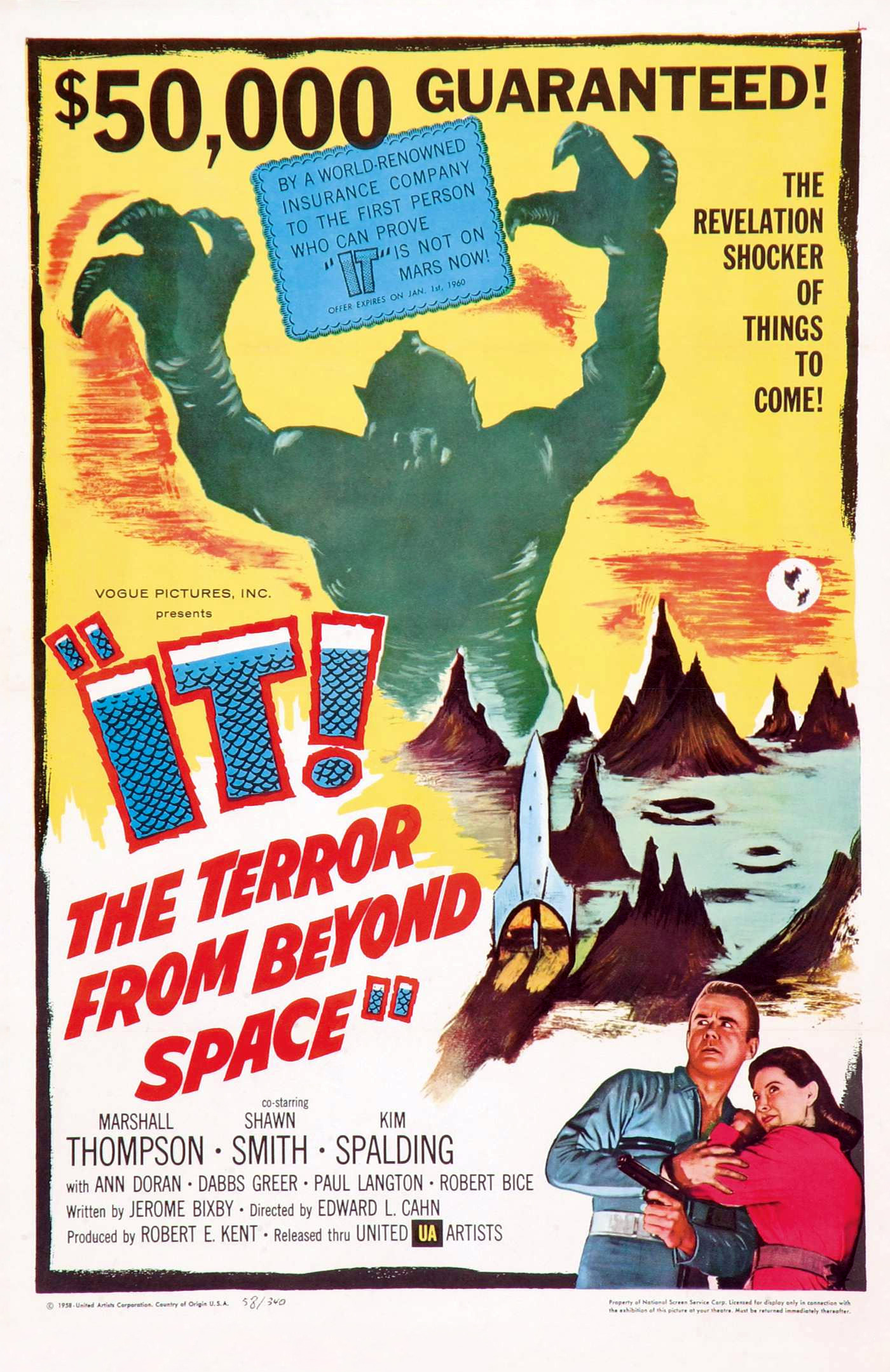 Whenever you see a film with a title like this, you know that it’s about to get very interesting. Aliens are always a lot of fun and with a film this old school you know that the writing will be on point as well. It’s got a very classic feel to every scene and the movie is short but still crams a lot in. Ultimately you should have a pretty good time with this one.

The film starts off with Carruthers and his crew on Mars. This was expected to be a big success but unfortunately all of the other crewmembers aboard are dead. A second spaceship is sent to retrieve him but the government believes that Carruthers murdered them all so this group is to bring him back to Earth to have him executed. Carruthers claims that some kind of monster took them out but the evidence doesn’t look good. After all, one of the crew’s skulls appears and has a bullet hole in it which certainly doesn’t sound like a creature is responsible. Carruthers quickly adds that it might have been accidental friendly fire from someone……then some members of the crew mysteriously start to vanish. Is Carruthers really insane and has started to bump everyone off or is it possible that there is an alien on the ship?

It’s not much of a mystery since the film shows you that an alien has come aboard right away but the dialogue can still be fun to see how Carruthers will get out of this. After all, even circumstantial evidence might be enough to take him down since most don’t believe there would be a whole lot of alternatives in space. If you don’t believe in aliens then odds are that you wouldn’t believe in the guy’s story. In particular, Heusen seems to have it all figured out. He gives a full speech about exactly why Carruthers bumped everyone off as he cites the lack of supplies and how this was the safest way to go. It would be tough talking him out of it although the rest of the crew tries to get him to ease up a bit.

You end up feeling bad for Carruthers the whole time because he’s just been through a very traumatic experience and having to be grilled and mistrusted after that really doesn’t make the experience any easier. It’s like he’s 100% truly alone now. I’ll give him a lot of credit for continuing to fight hard for the team and investigating the vanishings right away. He’s far more on the ball about this than any of the other characters. It takes a whole lot for them to finally get on board and see how serious this is.

There’s also a little romance started near the end but I can’t say that there was a whole lot of purpose to it. You would feel bad for Heusen if he was a nicer guy since this doesn’t bode well for him. Who’d have thought there was any chance of losing your girlfriend while on a space trip to Mars right? There isn’t a whole lot of time to dwell on this with an alien on board though even if not for a lack of trying on the guy’s part.

If the film has a weakness, it’s that the climax can be a little drawn out. At one point they figure out that they can use some fire to keep the alien at bay. So once guy stays downstairs with the fire gun while the others make some plans. This stalemate lasts for quite a while at one point. Both sides are feeling good about staying on their ends so there’s just a lot of talking about what to do. The monster is bullet proof and quite intelligent so that removes a lot of their possible options right away.

I like to think the heavier artillery might have done something but of course the first guy with the super gun has bad reaction times and allows the alien to get in close enough to bend it in half. So much for the gun right? That definitely did not go as planned but it made the guy look so bad. You have to be ready to shoot right away and not let the villain grab your gun. That’s a really easy way to get bumped off. One of the guys who goes down doesn’t even yell before being taken out. All of this is what allows the alien to stay in the game longer than he should have been.

The alien has a cool design though. It’s a little bit like the Gill Man but different so I would still call it unique. It does help further the classic “Green Martians” visual you get from those aliens which is cool. If anything this might have been one of the films to help strengthen that concept from the start. He is strong and surprisingly quick at times so this villain definitely gets to look good. It adds to the sense of danger in the film. While the climax can be a little long without a whole lot happening due to how durable the creature is, it does help to show why the crew would fear him so much.

By the end of the film it’s safe to say that nobody else will be going to Mars for a very long time. The place just isn’t safe anymore. Just one alien did a lot of damage, imagine a whole bunch of them? Space is also the last place where you want to face off against any enemies because there is just no escape. If you lose then that’s game over because you don’t have room to retreat. If anything the main characters were lucky to last as long as they did because the ship had a lot of different levels.

Overall, This was a fun film. It had good dialogue and an engaging plot. The government may have only gotten two scenes but they were both fun. The film is fairly short so you’ll knock it out quickly. This allows the alien himself to appear right away at least, I want to say he showed up within a few minutes although the first battle with the humans wasn’t for a little while after that. It’s not quite ready to top some of the other classic Alien stories but it’s a pretty good movie all the same. It also seems rare that we get an alien movie in actual outer space like this, at least back in the 50s. The effects were good though so this has aged well.