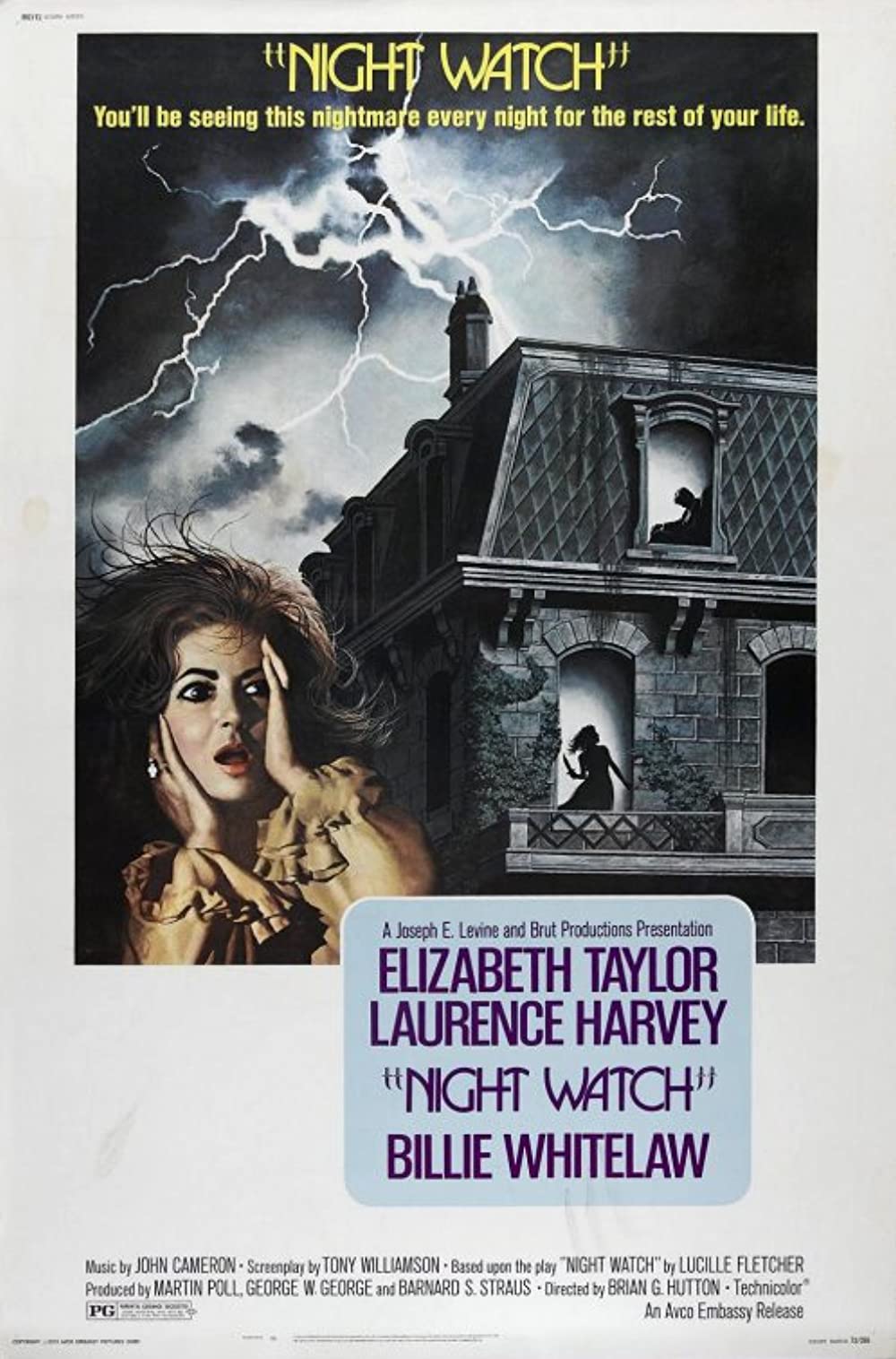 Night Watch makes for a pretty interesting watch after Gaslight. After all it seems to be going in a similar direction but is it really leading up to the same conclusion? Well, part of the fun is in watching it get there. It is certainly better than both of the Gaslight films but I still wouldn’t call it very good or anything. It certainly goes a bit far in the ending and it’s one of those films that doesn’t have a particularly likable cast. Some clever dialogue and moments do keep it from being a bad film though so ultimately it would be right in the middle. “Mid” you could say.

The movie starts off with Ellen and her husband John having an ordinary night but then Ellen makes the mistake of heading near the window during a dark and stormy night. She happens to see a murder in the window next door and quickly calls him over but by the time John gets there the body is gone. They call the cops who do a thorough inspection of the house but find nothing there. The cops think Ellen may have been imagining it. After all, it was dark out and the house is a fair distance to be watching in those conditions but Ellen does not drop her claim. Perhaps the next door neighbor Mr. Appleby knows something about it. He has been planting quite a lot lately……

So at its core this is a classic murder mystery only you aren’t sure if Ellen is correct here. She is in a fragile mental state due to some things that happened in her past. The movie goes into it but she had a breakdown at one point so this could be some kind of projection there. It doesn’t help that she keeps calling the cops over and over again to the point where they start to complain to John. None of the searches turn anything up so it’s not like they have much evidence anyway. The film is the embodiment of “The Boy Who Cried Wolf” when you think about it.

Inspector Walker is a fun character though. You have to give him credit for doing his due diligence because he does inspect the house multiple times. He certainly put in the effort even if it didn’t turn anything up. He even posted some guards to watch the place throughout the night. Even he has a breaking point with how often he has to go over to the same house. Perhaps arresting Ellen for a night for using up the police lines would have made some sense there. Not that you want to punish someone for reporting a crime but when it gets this excessive it has to be something that you consider right?

Now to Ellen’s defense, Mr. Appleby is certainly as suspicious as possible. I said that the cops never found anyone in the house but I should amend that to say that they found him there once. His excuse was that he was curious since Ellen kept claiming there was a murder. His other suspicious action was deciding to plant some new bushes/plants right after this supposed murder. Nothing wrong with gardening but the timing was certainly very interesting eh? He makes for a fun character. Someone who is rather defensive but who wouldn’t be when they’re a murder suspect.

John seems reasonable at first but gets gradually worse as the film goes on. He certainly acts like he’s making the right moves and defends Ellen in public but he is severely lacking in willpower. Lets just say that he makes all of the wrong choices which don’t bode well for him. You can say the same thing for Sarah who’s just not a very nice person. Since Ellen is surrounded by these characters who aren’t that great, it’s not particularly healthy for her recovery.

As for Ellen, well she is jumping at shadows after a point with how she keeps on calling the cops. At one point she apparently called over 10 times in one day which is really a whole lot. At that point since you know the police can’t do anything you’d think she would give it a rest. You aren’t likely to forget her as the lead though.

The climax gets surprisingly violent as mentioned earlier so you’ll want to watch out for that. The rest of the movie is really mild and laidback which is why this can come as a surprise. As for the twists at the end, well the film handles it really well. You definitely look back at the rest of the film in a different light and it all lands well. I would say I don’t think the plan will be as successful as the murderer expects though. This is something that only works for a short while, maybe a day at best. I think after that the cops will make a move and at that point someone’s going down. Now, whether they get the right person or not is really up to the viewer to decide.

I think they would pull it off though. Getting proof might be tougher but you have sufficient motive and things are very suspicious once they add it up. They may also get someone else who wasn’t in on the actual murder but knowing about it is almost as bad so game over there. It’s all head canon as the film ends early so you get to decide what happens next. It’s an open ending that works well enough. The film lives up to the suspenseful atmosphere it built up at the start.

Overall, Night Watch probably won’t play in quite the way that you expect and so in that way it really works as a solid mystery. It would be nice if we had more characters to really root for though. I liked the Inspector but he’s hardly the main character or even the main secondary one. I expect much like in a horror film they probably don’t want to make the characters too likable or you start to feel bad for everyone so it’s always a tight rope there. If you’re up for a suspenseful ride then this could be the ticket for you. It may have a bit of a slow build up near the middle but the film’s always doing enough to keep you interested for the ending.