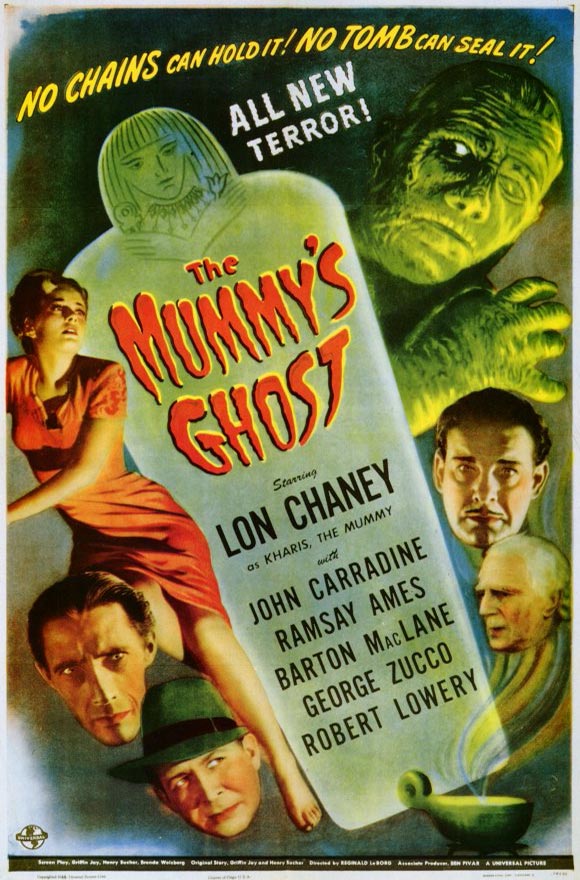 Right off the bat I know what question you’re going to have here. Is the Mummy a little more powerful this time than last time? Well, unfortunately the answer to that is no. It’s still only got the speed of an old man with a cane and only has 1 arm with which to attack people. That’s a shame but for the most part the movie plays out the same as the last one. It’s not quite as good in just about every respect though so while it’s a good movie on its own, it doesn’t end up actually living up to the previous one. I’m afraid it’s just a step down this time.

The movie starts with the old guy from last time explaining to the next successor in line that he needs to awaken Kharis once again and also find his bride among the people. Yousef believes the delusions and decides to act as he gets the Mummy to start bumping people off. The town is hesitant to believe in a Mummy showing up, particularly the inspector. Will they be able to ready themselves and launch a counter attack soon or is it already too late for them?

The main guy here is Tom and the main heroine is his girlfriend Amina. A nice little part to their subplot is that they’re planning a trip to New York to get out of this crazy town once the Mummy topic shows up. Amina is Egyptian after all so people are starting to take notice of that. Unfortunately the Mummy attacks right before they left but I like to think that they would have escaped his range. I’d like to see the Mummy try to get into New York. It’s just so far after all and would be risky for Yousef to transport him in the sarcophagus or something like that.

As always the human villain gets a bit greedy here though. Things were going just find for Yousef but then of course he fell in love with Amina so instead of delivering her as Kharis’ bride, he wanted her for himself. Not a very smart move on his part. Naturally this leads to his inevitable end and he made a lot of very poor decisions the entire movie. You can’t let your feelings get in the way of things, that’s never a good idea.

As for Kharis, he’s as slow as ever. I guess it seems like the Mummy wants romance more than anything here. I suppose to an extent that was always part of his character but here that is his only character and it’s not a very compelling one. So he’s not a scary or likable villain at this point which hurts him on both accounts. If anything you feel like his ending was a little too happy.

Then you have the main two characters who were decent. I think Amina is a little too easily mind controlled though. I always tend to feel like the person being mind controlled just needs to focus a bit more and they should be able to overcome this feeling. Instead it happens in an instant whenever Yousef appears. You’d think it would just be with Kharis though, why for his sidekick? As for Tom, he makes sure to stick up for Amina each time which is good. He doesn’t let anyone mess with her and he’s even got a nice little dog who is always helpful and wants to do his best to protect them.

In general you do get the feeling that this is a very nice town with kind people who just want to help. The movie has a nice atmosphere and the writing is strong. On its surface it may just be your average creature feature film but that’s part of what makes it work. It’s a very simple title that has strong fundamentals. I wouldn’t say it has any glaring flaws. The weaknesses are more about what the film does not do like it could have been longer or given Kharis a bit more to do aside from just hobbling around a bit.

Making Kharis more formidable would really be a good idea for the film. Also he needs to stop effectively working as the villain’s lackey and be his own master. It’s always odd to see the Mummy playing the sidekick role rather than being the big cheese. It just doesn’t make sense to me is all.

As a final note, I also wasn’t crazy about the ending. I thought it was a little mean spirited towards one of the characters. She definitely didn’t ask for this and it just didn’t get the level of sadness from the cast that you would expect. The film just kind of ends on what I’d consider a really sad scene but it just seems subdued in the film. Certainly an ambitious ending, I’ll give the film that even if I didn’t like it all that much.

Overall, The Mummy’s Ghost is a solid sequel. It could have been better but at the end of the day I guess I’ll just be satisfied with it being a good film. One thing that is always impressive is how the films keep building off each other. The time skips may ensure it’s usually a different cast but the Mummy always being the same is pretty intense. If they had kept going with the film it could have even gotten a little sci-fi by the end. Now that would have been hype. There is one more Mummy film to go though so I’ll have the review for that one up shortly as well.