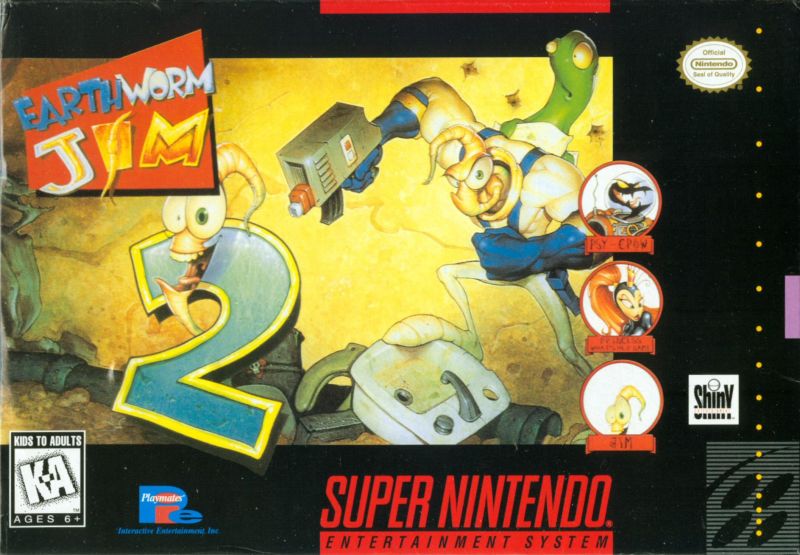 This is one of those games where I can’t say that I knew a whole lot about it but I definitely knew the name. Earthworm Jim is one of those names that just sticks around in your mind from start to finish. You can’t forget it because it’s just way too intense. The game lives up to the hype and is definitely a blast even if the ending starts to get a little on the crazy side. Certainly a very difficult game as well.

The game starts off with Jim on another adventure to save the princess or at least I think she’s a princess. Along the way he has to fight with a lot of different creatures. Get ready for some big plot twists by the end too. This is not a game that spells everything out for you. At times you will really have to connect the dots on your own and also decide how real the ending is. Personally I like to think the whole ending is completely real and just how it appears to be. It’s an ambitious way to end the game and I can definitely approve of that.

As for the gameplay, it’s Fairley standard for a shooter. You blast away at your enemies and keep on moving. Your ammo may not always be great but you slowly recover some if you’re ever totally out. I recommend not wasting your ammo though as it is extremely useful for every part of the game. You don’t want to be running low against a boss or you’re really in trouble. You have different kinds of guns around here too so try and learn how each one looks and feels. The best one is the machine gun style but all of the guns are useful for something or another. Mainly you also just can’t to be good at jumping and dodging so you don’t just eat every attack. Do that and then you’ll really be in a jam.

One level that gave me a lot of trouble is the final level so here’s something to keep in mind about that. You have to stay ahead of your opponent at all times here or you lose. If you make it to the end of the level but he was first then the level just ends with you being stuck until you run out of health. So you have to move really quickly here and it cost me a ton of tries to get that far. Trust me, it definitely was not easy at all especially because you’re never given any indication that the rules around this level were different than the rest. Seriously it just comes out of nowhere which makes the whole thing a bit surprising.

Aside from the gameplay, the soundtrack and graphics are all solid. This is what I would call the complete package because it looks and sounds good while also being a very satisfying play. It’s hard to go wrong here. It’s aged incredibly well for the SNES, you could probably get away with thinking this could even look like an N64 title. Throw in the fact that it had more of a real story than the others and it really seemed to be ahead of its time.

I’m a little surprised there weren’t more 2D platformer shooters back in the day. I suppose Mega Man cornered the market there but they always tend to be a lot of fun and satisfying. This one just proves that even more. It’s probably the last Switch Online game for a bit but I was definitely thrilled to get a chance to play this one. Hopefully the console keeps on updating with more and more solid games. Who knows what other gems are hiding out there just waiting to be played!

Overall, Earthworm Jim 2 is definitely a solid game. I had a lot of fun with it at least and the title really embraced how crazy the whole thing was. It was definitely not trying to be your average shooter game. I’d really be down with a remake of this game at some point. There’s a whole lot you can do here for the future. Some of the gameplay mechanics should be explained better so you aren’t walking around in circles or anything like that but those are easy fixes to make. (Finding out how to open up the flowers to throw around took me forever!) Pull that off and you’re in a good spot!