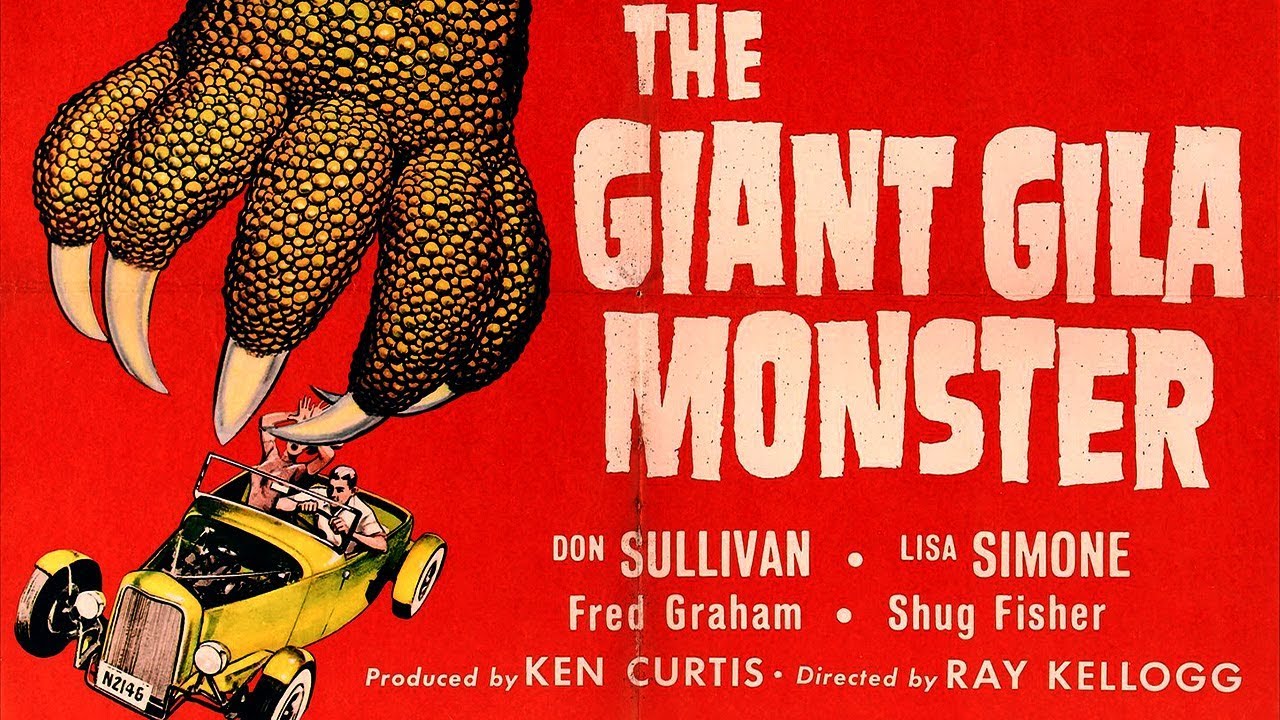 This film came out just a few years after Godzilla which is pretty cool. It definitely didn’t wait long to try and capture that giant lizard kind of feeling. It’s a pretty good film even if the budget is noticeably low for the monster so half the time he looks like a normal sized animal. The camera angles weren’t quite clever enough to try and hide this either. The writing is strong though and the film is always keeping things interesting with a human antagonist in the mix for when the creature isn’t around.

The movie starts off with a bang as the Gila monster takes out two teens who were on a pleasant drive. This is within 5 minutes of the film starting so that’s definitely one way to make your Kaiju have a lot of presence right out of the gate. From there we cut to the actual main character Chase. Chase is someone who really likes his cast cars and learning how to hot-wire them so they can go at crazy fast speeds. He is more responsible than the rest of the teens though and keeps them in check which is why he has the respect of the Sheriff. Initially they don’t think much about the kids vanishing and figure they may have just gone off to elope.

Mr. Wheeler insists that the sheriff does a more thorough job on all of this though so he enlists Chase’s help to figure out what happened. Part of the issue here is that the area is incredibly large and the Sheriff force is quite small. It’s really just the Sheriff most of the time which is why he needs to ask the teens for help. Another issue is that this area is really dense and hard to get through because of all the branches and shrubbery. It’s possible that the monster could have been here for years and nobody noticed.

While Gila does appear early on, it’s a long time until we see him show up again after that. The human story is good enough so you’ll stay engaged but I would have liked a little more creature action. It may have been hard on the special effects team but that would have been a really good way to make him appear more as a true threat. Then the characters would definitely not want to mess with this guy. It would probably change the film’s plot a bit since more disappearances would mean that the town would have to take things serious a little sooner but I think it would have been a good move.

Instead the film is more about showing what a responsible guy Chase is. He does make his mistakes like towing one of the vehicles before the Sheriff can see it, but he does help a lot more than he doesn’t. Chase also still manages to balance out time to hang with the other teenagers, do the detective work, while also working on his car business. He’s quite busy and we quickly find out why. His little sister Missy needed some work done on her legs so that she could walk again and so Chase has done his best to put up the money. He’s used all of his savings on this and works really hard so that he can get more money.

In short, Chase is really shown to be a great guy who does his best at all times to make ends meet and to help out. Without him the Sheriff would have really been in trouble here. At the same time I did like how Chase’s mistakes come back to haunt him later on when Mr. Wheeler gets involved. Little scenes like Chase stealing the broken car’s tires and headlights (Since he figures the owner won’t need them anymore) are brought up as evidence for Mr. Wheeler that Chase needs to be detained. It’s hard to argue against some of that evidence as well. We know that Chase was hard up for cash but theft is still theft.

Mr. Wheeler made for a solid antagonist in general. He isn’t a complete villain or anything as he just wants to find his kid but along the way he gets more and more unreasonable. In a way that’s probably how he is coping with his loss here. Wile the death happens immediately in the film so it’s not too sad for the audience, it’s certainly crushing to Wheeler as he has to start contending with the idea that his kid is dead as the movie goes on. I was almost starting to think they would find a way for the kid to have lived in the end as part of some perfect twist ending but the film doesn’t go back on that.

Chase’s girlfriend Lisa also does well here. She definitely doesn’t want to be split up at any point and so she accompanies Chase on his more dangerous mission. She helps out a lot with the nitro and also covers Missy when the bombs go off. Throughout the film she is very supportive and does what she can to help. The movie certainly knew how to develop strong characters. Same with the Sheriff who would stick up for Chase and called Wheeler out on his bluffs. The Sheriff was a very reasonable man and I would say he handled the situation quite well.

This movie has very strong writing which makes up for the monster not appearing all that much. You really get to enjoy the human characters here and their dialogue. The movie can feel a little long at times so for once I won’t say that the pacing was perfect but there’s really nothing to dislike in this film. It’s just a pleasant title from start to finish. I will say that I was skeptical about the nitro containers not bumping into each other with the way the characters had it set up though. Holding them all less than an inch from each other while driving a car? That’s not happening and I wonder how Chase thought he could have done this on his own. Seems to me like he would have been doomed there.

If the film has any negatives it’s that the songs aren’t very catchy. It’s definitely going for a very old beach movie kind of vibe which makes sense since this was the era but the songs haven’t aged really well. The actual soundtrack was really impressive though. There was a Twilight Zone kind of theme that would play every now and again that I thought was really solid. It helped build up the intrigue and suspense for whenever the monster would show up or even when the characters were investigating it. That was surprisingly solid.

Overall, The Giant Gila Monster is a fun film. The effects may not have aged well but the writing certainly did. The characters are all very professional and know how to get things done. It’s hard to picture a character being quite as responsible as Chase nowadays. I could have used more monster action but fortunately the human moments were strong enough where this was able to work out in the end. I’d definitely recommend this one if you’re looking for a solid creature feature.