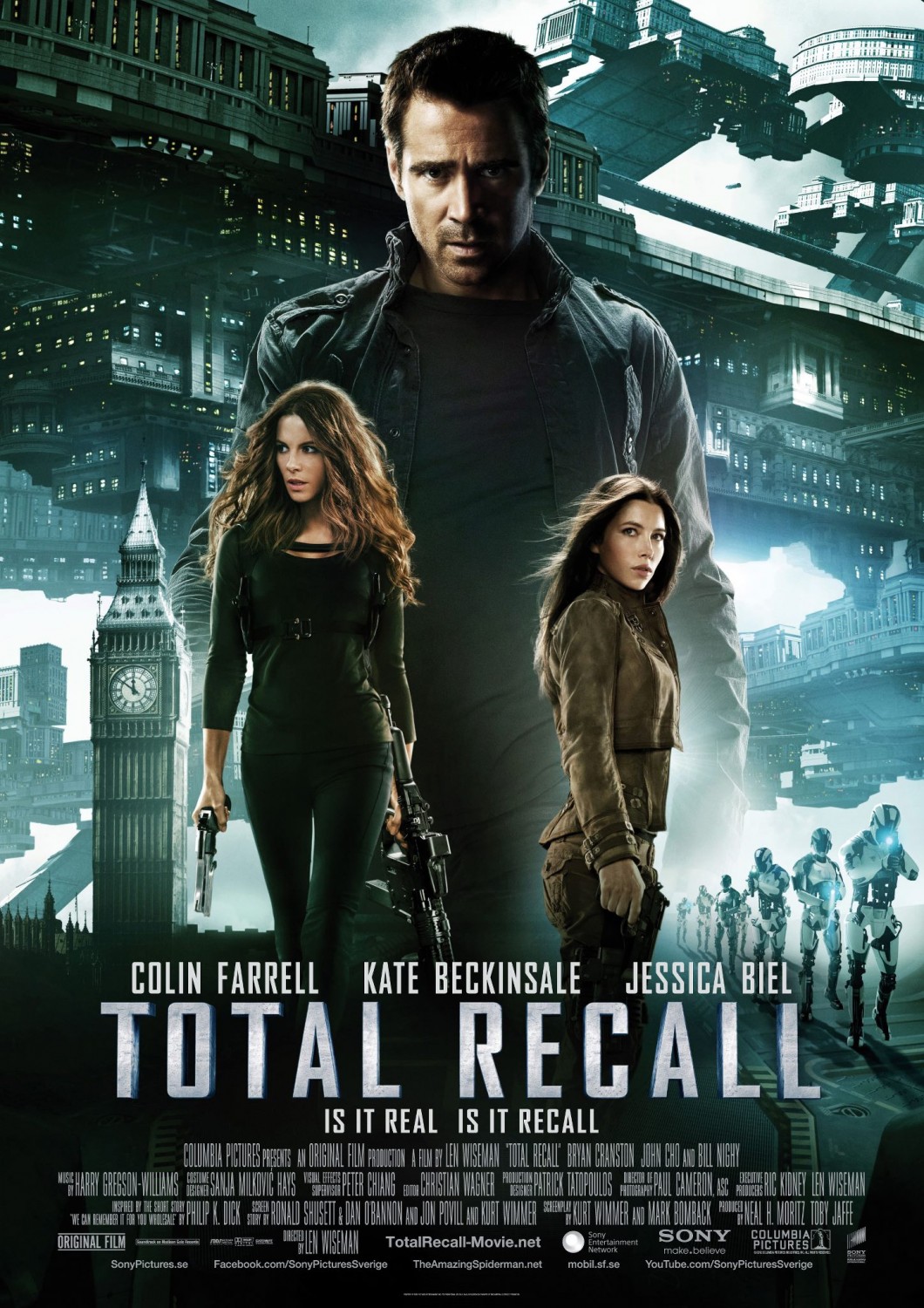 Total Recall is one of those remakes that did a really good job of managing to surpass the original. It’s a good action movie all the way through that never lets up on the thrills. There’s a lot going on here and while it may not be a thriller that’s super different in any way, I would say the fundamentals are always on point so you have a good time here. It’s got that YA feel both in the look and feel of the film but also in how you feel this could have been a trilogy if it wasn’t moving so quickly. Of course the good thing about that is that the film never drags on.

The movie starts by introducing us to the state of the world. So things are not going great right now. The world was completely ruined and so now there are just two sections. One part is for the rich continent which has taken over most of the world and then you have a small colony that does not want to be forced to join this union. There is a bitter battle going on between both sides but the colony is considerably weaker. They have less people on their side to defend themselves and less tech as well.

This is all way over Quaid’s head though. He just goes about his life as always and just complains to his friend Harry that the days are kind of boring. He’s married to Lori and they have a good time but he feels unfulfilled. That’s when he ultimately decides to go and give Rekall a shot. This is a place that will give you fake memories which feel real so now he can finally do all of the stuff that he never could in the real world. Not a bad bet right?

Well, maybe not a great one either. Everyone warns him not to do it, apparently your mind can be fried and the whole thing sounds shady. Quaid wants to do it anyway but before the procedure can go through, he is viciously attacked by a whole squad of troopers and Quaid ends up murdering them. He runs home where his wife tries to murder him and everyone claims that he’s someone that he’s not. Has Quaid been living a fake life this all time? He has no answers yet but he’s wanted by just about everyone so it’s time to buckle up and start racking up the wins.

The fight scenes here are all effective. I definitely enjoyed the hand to hand which was handled well and you got the king of secret agent vibe you would see in James Bond or Jason Bourne. There’s never a particularly powerful fighter on the villains’ side which is too bad but there are still a good amount of action scenes in general. Lori puts up a good fight but usually Quaid is not actually trying to hurt her which is something you really need to put into perspective here. It definitely changes up the dynamic quite a bit.

The effects are solid but I will say that you never feel too engaged with the world building here. It’s a classic kind of dystopia story but Hunger Games and Divergent built their worlds a lot better right out of the gate. For this one a lot of names and terms are thrown around but you have a hard time actually caring. It all just feels uninspired in that sense. Even the whole elevator system of getting from one side of the planet to the other could and should have been a lot more interesting than what we actually got.

Part of why I thought this had the vibe of a trilogy was because there were so many players it didn’t feel like we were going to get to everything but then the final 20 minutes turn the pacing up to turbo. We’re bumping people off left and right and closing out all of the plots so things have a bit of a magical ending. I have a hard time knocking fast pacing and if you know that there’s no sequel then it’s good to throw everything into the mix but then some characters feel wasted.

The big leader of the resistance is hyped a whole lot throughout the movie and does not come anywhere close to living up to that as the movie goes on. He’s extremely underwhelming the whole time. Back to Quaid though, he’s a decent main character. I wouldn’t say great though because it does feel like he ran to Rekall too quickly. What if his mind was shut down? He didn’t really stop to think about how that would affect his wife and friends. It was a bit selfish of him to just head for that machine straightaway like that.

As for his friend Harry, well he had a fun attitude about him. I can’t say I liked him much by the end but he did well in humoring Quaid all the time with how the guy was bored of the routine. Switching seats so quickly the way he did was a good way of being supportive. Meanwhile Lori is pretty much the main villain here with how she’s trying to murder him the whole time. She made for a fun opponent to be sure even if she probably could have handled things better to accomplish her goals.

At first Quaid was seriously confused and not sure what was going on. So instead of trying to choke him out, why not reassure him and say that things will work out? Keep up the role until you actually have a great chance to shoot him in the back. She had every element of surprise in her favor so this really should not have been hard. She could absolutely use that as a way to claim victory here and that would have worked out. Quaid wouldn’t have really had a way to stop her.

As for Melina, she’s a solid heroine. I think it’s clear that she isn’t quite as skilled as Lori but she does her best to stay in the mix and land a lot of good shots in. I would say that she definitely still does good the whole time here. The complete cast here is rather small to be honest although we also have the leader of the government who runs around talking tough. He’s a very classic kind of leader villain so there isn’t much to him beyond his plans to take over the world. He did outthink most of the cast for the whole film though so kudos to him there.

At the end of the day what makes Total Recall work is how it’s really just nonstop action the whole time without any chances for a breather. The fights keep on coming and while the whole amnesia plot can usually be more annoying than interesting, it wasn’t executed poorly here. It’s also interesting to see Quaid not even be able to trust himself since he knows how thorough the brainwashing can be. The final part of the movie has some pretty interesting moments with trying to make you doubt what’s what. I don’t think it’ll end up fooling you at all but it’s still a nice try.

Overall, Total Recall definitely beats the original for me. It doubles up on the action and just never lets up. It’s a solid all around film and while it may not stand out in many ways, it just executes on the premise well. This is a better YA film than most and definitely deserves to get a sequel. Its only real weakness is that the worldbuilding is incredibly weak but that’s something that should be easy to fix. At least I don’t see that being a hard one to correct so if it can just pull that off then we’ll be good and this can make a name for itself.