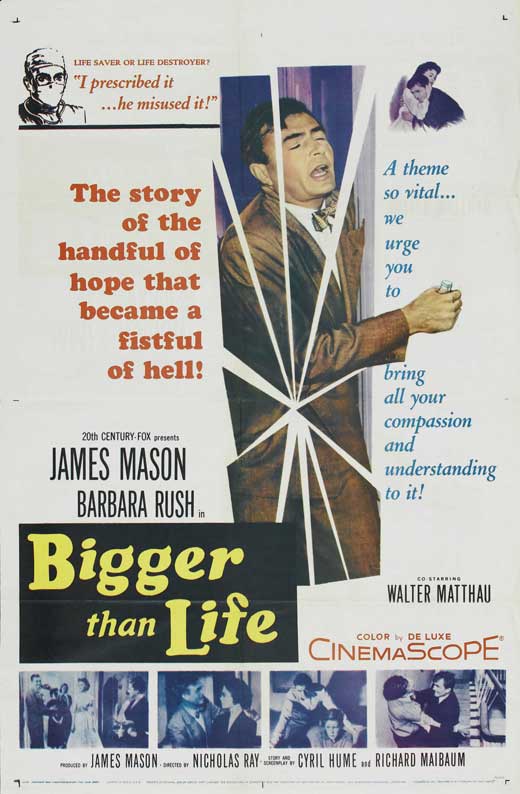 It’s never a good thing when you become bigger than life because that means that your ego is probably something you haven’t kept in check. This film has something like that happen to the main character but it’s not ego in this case. Instead it comes through not following the proper dosage on a drug and things get a little dicey. It’s why following the instructions for anything is so crucial.

The movie starts with showing us how sick Ed is. He’s been having seizures and fainting spells as of late so he is taken to the hospital and the prognosis is not very good. Ed will be dead in short order unless he tries an experimental treatment which could bump him off as well. It’s his best and only option though so he goes through with it. At first things appear to be fine but slowly Ed begins to go more and more insane to the point where even his family barely recognize him. Will Ed be okay or was this one case where the cure is deadlier than the condition?

Now, I mentioned that the issue is with Ed taking too much Corazon but even before that he started going a bit off the deep end. Sure this sped it up but based on how it appeared, he would have gone crazy sooner or later while taking these. Nowadays it’s more of a mainstream drug and I know it’s used on a lot of things so at least the going crazy part isn’t happening now.

Ed’s wife Lou doesn’t handle this too well the whole time though. On one hand she is trying to back up her husband at every turn which is admirable but it goes too far when he starts becoming a danger to everyone around them and she doesn’t act. He becomes quite harsh with their kid and starts acting like a drill sergeant. He doesn’t treat her very kindly half the time either and by the time she is finally ready to acknowledge that he is crazy..he is completely off his rocket. Her final plan also wasn’t subtle enough which nearly cost her everything.

The story has a happy ending but she didn’t contribute to that too much. She also should have been a lot nicer to Wally who just did his best to keep her in the loop and offer advice. She was rarely if ever grateful at all. Its fortunate that he was around in the end or thing would not have gone very well at all. Wally was easily my favorite character here. No matter how many verbal shots he took, the guy just kept trying to help anyway. Now that’s a really good friend.

As for the kid Richie, he’s not old enough to be able to do much of anything in this scenario anyway. He’s not a very interesting character and eventually also gets to his breaking point but there’s just no way for him to really impact the story. I don’t think you even needed him in the film since it doesn’t change much. You could have Ed threaten someone else instead for the same effect.

As for Ed, well it’s hard to like him here since he was taken over so completely by the drug and cracked. It’s too bad there weren’t at least scenes of him trying to fight it or we could see in his mind as the two sides of him fought. Instead since the brain washing was so complete and immediate, the only thing you can assume here is that he didn’t have the willpower to resist this. Hopefully he is able to stay strong now but for the majority of the film he’s effectively the antagonist.

The movie doesn’t have a very fun feeling to it the whole time either because of this. It’s either the characters running away from Ed or he’s just acting off. There aren’t a lot of light hearted moments after the first few scenes. The ones we do get later on are almost always interrupted into a more tense moment.

If the character cast was better then it would help the movie for sure. Instead this just ends up being a movie that you will get through but you probably won’t be recommending very high. It doesn’t really have any replay value either. The writing is good but the characters aren’t so it’s not really able to take full advantage of that. Some of the drama can also be a bit forced like Ed not letting Lou know about his part time job. While he indicated that she wouldn’t be happy about it, that’s not consistent with her character at all. Seems to me like she would not have thought that it was a very big deal at all.

So Ed’s perception may have already been a little off here. He was adding on extra stress to himself that he just didn’t need. Once he turned crazy he would certainly start making a lot of scenes like at the school and when he started to read his Bible but before that it didn’t seem like he had enough trust in Lou. If he had confided in her earlier and more often then she may have been able to help him get around the side effects right from the start. It’s why you can’t always go it alone in these things or you may end up being down and out.

Overall, Bigger Than Life is an emotional film about losing control of your mind. It’s definitely going for a pretty serious vibe and succeeds at that but as a result the movie just doesn’t have a lot of charm to it. You can get by without charm if the story is just that epic and engaging but this isn’t even that kind of adventure. It’s more of a low key story as the characters try their best to get through this tough period and there’s just not a whole lot of reasons to watch this one. It’s not bad and if you’re up for a more somber film then it’s worth a shot but you can definitely find something else to check out.