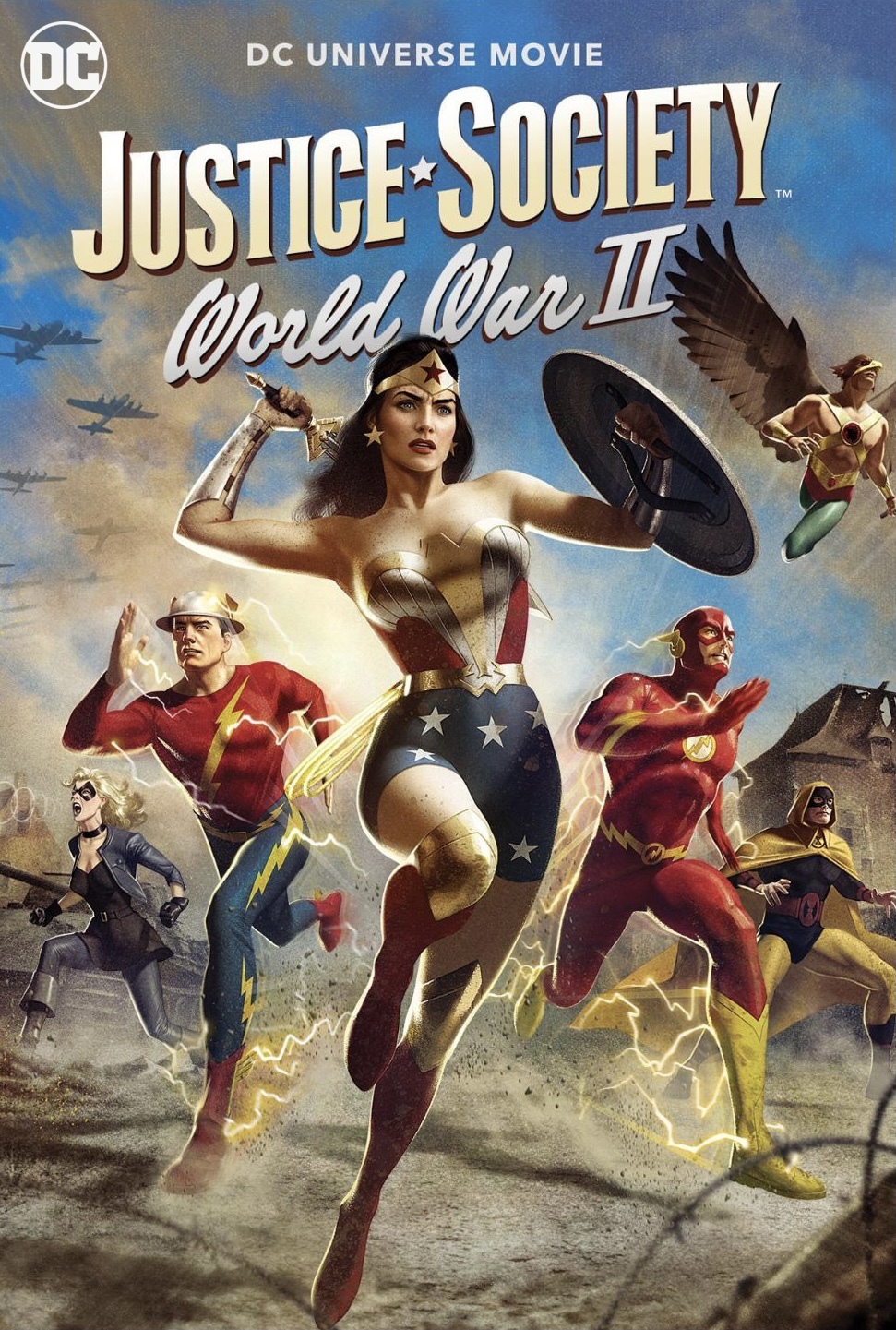 The Justice Society is a group that has always been overshadowed by the Justice League in the past. They’re a group with a lot of heart but typically can’t keep up in the power levels department. Plus, they tend to only be around in the past so there aren’t a lot of opportunities to show them off. Well, they finally got their own film and it’s a pretty good one. I feel like the setting holds the film back a bit and I never quite warmed up to the group but in the end you will have a good time with this one.

The movie starts off with the Justice Society group getting formed in the past while the Flash helps Superman fight off Brainiac in the present. Superman’s having a tough time for once as Brainiac is kicking him around and nearly finishes the job before the Flash steps in. However, the Flash was so eager to help that he accidentally ended up going a little too fast and warps to the past. The Society needs some help to fight off the Nazi’s so Flash is eager to support but will they still stand a chance once the Atlanteans get involved?

Now I know what you’re thinking. The Flash can whoop all the villains in an instant and then run home right? Well, to make sure that didn’t happen, the film has Flash lose most of his speed. The idea here is that since there are now 2 Flashes at once, the Speed Force can’t quite handle it and so they’re both slower since they’re tapping into the Speed Force. I have to assume that the Force gets stronger later on since you have guys like Bart and Wally using the Speed Force at the same time as Barry. So it might feel a bit convenient but I can respect wanting to keep the power levels from being too crazy.

Even with that you might not buy into the Flash having a tough time with most of these situations and that’s valid. Part of the issue with having the film be set during World War II is that there aren’t many real threats to go up against the group. It’s a little harder to throw in tension when you’ve got superheroes fighting off random guys with guns. It’s naturally satisfying to see the Nazi’s get wrecked of course but by the same token you won’t feel very nervous for the heroes even when the stakes are high. The movie isn’t afraid to get rather serious about how not everyone will make it out of this one.

There’s also a really good twist the film has later on which completely helps to redefine what’s happening. I thought that was excellent and it allowed the film to really effectively use the setting. You could probably even take it farther but it may run the risk of the Justice Society being overshadowed in their own film so that could have been risky. As it was, adding Aquaman and his right hand man was a really good idea here because now Wonder woman had someone to fight. Obviously she is really the power hitter of the group and so you need someone who can actually fight her.

Aquaman vs Wonder Woman is absolutely the highlight of the film. Their fight has a lot of back and forth to it and can be surprisingly long. It’s not a one and done kind of deal which is great. Aquaman seemed to have the slight edge in their fights but it was fairly even so it would take him a while to win. Personally I’d consider Wonder Woman to be stronger in most continuities but she always did seem weaker in the older eras so I suppose I can see how Aquaman would win here.

Either way having super powered action is definitely the way to go. The present fight against Brainiac was also fun. Honestly it’s almost too good since that makes for a much more engaging story than what’s actually happening in the war. You already know most of the main storybeats of World War II after all even if they’re adding extra super villains and threats around. In the present it’s anyone’s guess as to what’s happening. That’s enough on the setting though.

For the animation, it’s using the style that the last few DC films have so it is definitely a keeper for this continuity. While it’s definitely a lot weaker than the more traditional DC films like Superman Doomsday and all the New 52 items, the fight scenes look good. While the colors may all be faded out in that New Frontier/Superfriends kind of look, the choreography shows up. Aquaman was swinging his staff around like he was Thor using Mjolnir. The battles are fast paced and definitely work well.

The soundtrack isn’t particularly memorable though as I couldn’t recall any main themes. The character designs are all on point with the exception of Wonder Woman. She reminded me of Rocketman for some reason with how her head was extremely sharp and seemed like the crown was on so tight that the whole shape changed. You’ll know what I mean as soon as you start the film. I never really got used to it and hopefully her appearances in the modern era wouldn’t have that issue. It was the only design that didn’t quite seem right.

As for the characters, it was a solid cast overall. Barry felt a bit more like Wally with how he was joking around the whole film. Barry’s personality does change a whole lot based on what continuity you’re in though so I wouldn’t say it’s out of character but a little different from the Barry I’m used to. He tends to sandbag in the fights a whole lot but does good in clutch situations. Superman naturally looks great in the present even if he still tends to make some rookie mistakes. In the past their version of Superman’s definitely not as good though. Definitely not someone who will have your back.

Then we have the Justice Society and their gang seems rather wound up as they yell a lot and are quick to move against Flash. I thought they were completely unreasonable during the first meetup and it took them a while to really get going. Surprisingly Hawkman seems to be the most levelheaded member of the group. He tries to get everyone to work together and also talks them through the tough moments. It’s definitely one of his best animated portrayals yet.

Wonder Woman has fun with the group and seems like a decent leader. She makes some questionable decisions (Leaving Black Canary to guard the Flash…really? but is ultimately the reason the group is still alive as she can deal with the threats that nobody else can. Hour Man still makes for an interesting hero with how his powers work but man is it a huge weakness. He just can’t stay active for very long and his powers are constantly running out as a result of that. Jay is the Flash from this team and I thought he was good. He seems to have not practiced with his powers as much as Barry so he doesn’t know how to do a lot of things but he also comes through with one trick that Barry didn’t know so that helps to even it out. He’s a nice enough guy and does tend to support Barry.

Black Canary gets a rather big role here as she gets some character development. She can be rather rude to Flash without provocation and we learn why that is later on. Her power is certainly very helpful that’s for sure. Finally there’s Steve Trevor who may not really be a member of the group but he’s always around to help and provide cover fire. You have to give him credit for jumping into all of these dangerous situations without hesitation. Takes a lot of guts to do that and he is definitely a great role model for all the heroes.

For the villains, Aquaman’s right hand man wasn’t particularly interesting. Mind control is definitely handy for many reasons but as a villain he barely had any real personality. He’s the kind of guy who plays all of the sides but can’t really fight on his own. As for Aquaman, he has no strength of will here and gets manipulated all of the time so it’s not a great look for him. He has great power but really needs to work on his mental defenses.

Overall, Justice Society is a very balanced movie. It’s got a lot of positives going for it without a doubt but ultimately doesn’t excel in any one area which is why it won’t go down as one of the more memorable ones. I’d like to see the Justice Society return in the present someday, now that could make for a pretty good battle movie. Still, if you’re looking for a solid movie to watch then you can’t go wrong here. The pacing is good and it’s an all around enjoyable experience.