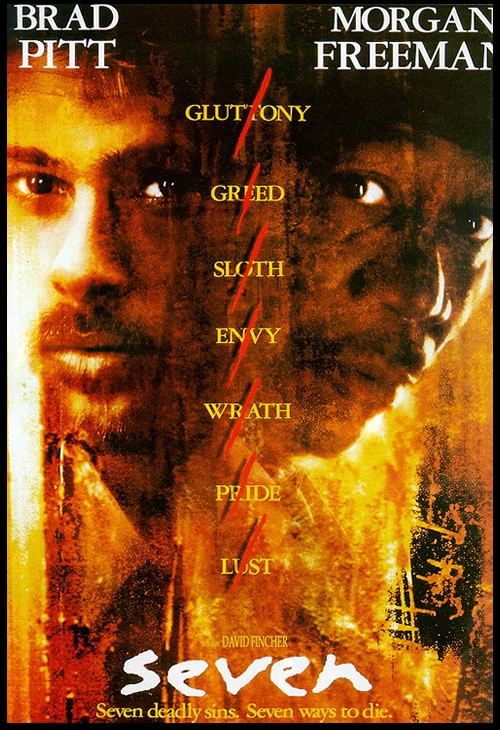 When you’ve got a film with the heroes trying to stop a mass murderer you can often come up against the rather tricky dilemma of establishing this plot while trying not to let things get too dark. Having a psycho be the main villain usually makes this quite impossible though and this film was not able to survive it. It definitely gets twisted for all parties involved and with no real winners here you’re going to want to skip this one.

The movie starts with William getting ready for retirement. He’s had a good career on the force but it’s time to call it a day. Unfortunately his plans are slowed when a mass murderer shows up and starts creating headlines. William is paired with a younger detective known as David who is eager to prove himself here while William just wants out. They do not get along at all with William constantly pushing David. Still, the two will have to get their act together and quickly or this John Doe will continue his murder spree. The only pattern so far is that he’s murdering people along the line of the 7 Deadly Sin. Each of his murders are then stylized based on that.

You feel bad for William because of course something like this had to happen right when he was about to retire. Couldn’t have waited just a few more days right? Now in a way he can’t walk out because if he does it’ll be like he ran away from the case and he’ll probably also be living with a lot of guilt. William is incredibly jaded by this point as well since he’s been working in such a corrupt city for so long. He sees awful crimes every day and at this point doesn’t see a lot of hope left for humanity. There’s nothing left here for him if he stays on the job.

Unfortunately he’s also the best detective around and he knows this very well. Part of why he’s so antagonistic to David at first seems to be to try to get him out of here. He’s concerned why David specifically volunteered to enlist here and the guy never really gives him a straight answer which doesn’t help matters. Meanwhile David’s more of an optimist who thinks he can make the world better one case at a time. He’s got a lot of energy and definitely wants to prove himself. He means well and makes for a good main character. I actually thought he was a little better than William here.

Sure, William is more talented but the fact that he is so jaded means that he just isn’t enthusiastic about anything anymore. At least David is doing his best at all times to make sure that things go well. Then you have David’s wife Tracy who is not happy about being here at all. She would rather be in just about any city but came along because she wanted to be supportive at all times. She’s definitely well meaning in that respect but it would have been best to have a full conversation with him about it. Even their apartment is in rough shape and shakes whenever a train approaches. It would be very difficult to live like that for very long.

The actual villain “John” is your average psycho so there’s not a lot to say about him. He wants to see the world burn and to bring everyone to his level. He has a whole methodology on how he murders everyone but also enjoys it quite a lot and gets called out by the main characters. At the end of the day he’s just a criminal who has to be stopped. The guy has a lot of plans and certainly gets around but you’re just hoping he’ll be caught pretty soon.

One common issue with these kind of films is how much the villain gets away with before being taken down though. There are 7 deadly sins so you would hope the heroes could stop him after maybe 3 right? Really show how they prevented a tragedy but no, you quickly realize that he’s going to get all the way down the list so by the time he’s stopped, he’s already won in a sense. The film is definitely going for a very tragic ending with how this all plays out. There’s definitely no happiness to be found here that’s for sure.

The film takes a little time out to show how crazy parts of the legal system can be though with the villain admitting that he’ll just plead insanity if they actually try him in court. Since recordings outside of the court room don’t count he can blatantly admit to being the murderer as often as he wants but it won’t count. The whole thing definitely feels really crazy and I feel like the film was trying to point out how absurd the whole thing is. It’s unfortunately realistic in that sense. Sure, there’s a chance the heroes could win in court but it would all be a gamble so even by the end they’re playing to the villain’s tune.

Throughout the movie you’ve got a very heavy atmosphere since each of the deaths are so tragic. Each person is murdered in increasingly disturbing ways so it’s not like the murders were even quick or anything like that. Most of the murders aren’t on screen which is good at least but you do always see the aftermath and know what went down. It’s definitely not a film you’ll want to check out if you prefer to avoid the darker elements like that.

In the end that’s why the film can’t succeed. You ideally want a film where the heroes win and save the day on a fun adventure or if you’re going the darker route, have a villain who wins but has interesting ideals or the murders are quick and matter of fact. The more deranged you make the villain, the less likely the film is to succeed because it’s just going way too far the whole time. You don’t have time to enjoy the film because you’re constantly getting hit with these moments.

Overall, Se7en is a film you’ll want to avoid. It’s a rather gritty film where there are no winning battles. You can easily see why Williams is so jaded because every time he solves a case and sees these horrors, he has to know that more atrocities are being committed at the same time. After a while you just feel like giving up and that’s pretty much what happened to him. If you want to see a murder mystery film that reigns it in a lot more you’ll want to check out something like Clue instead. You’ve still got a lot of those themes and elements but without all the extra details that you’d rather not see.