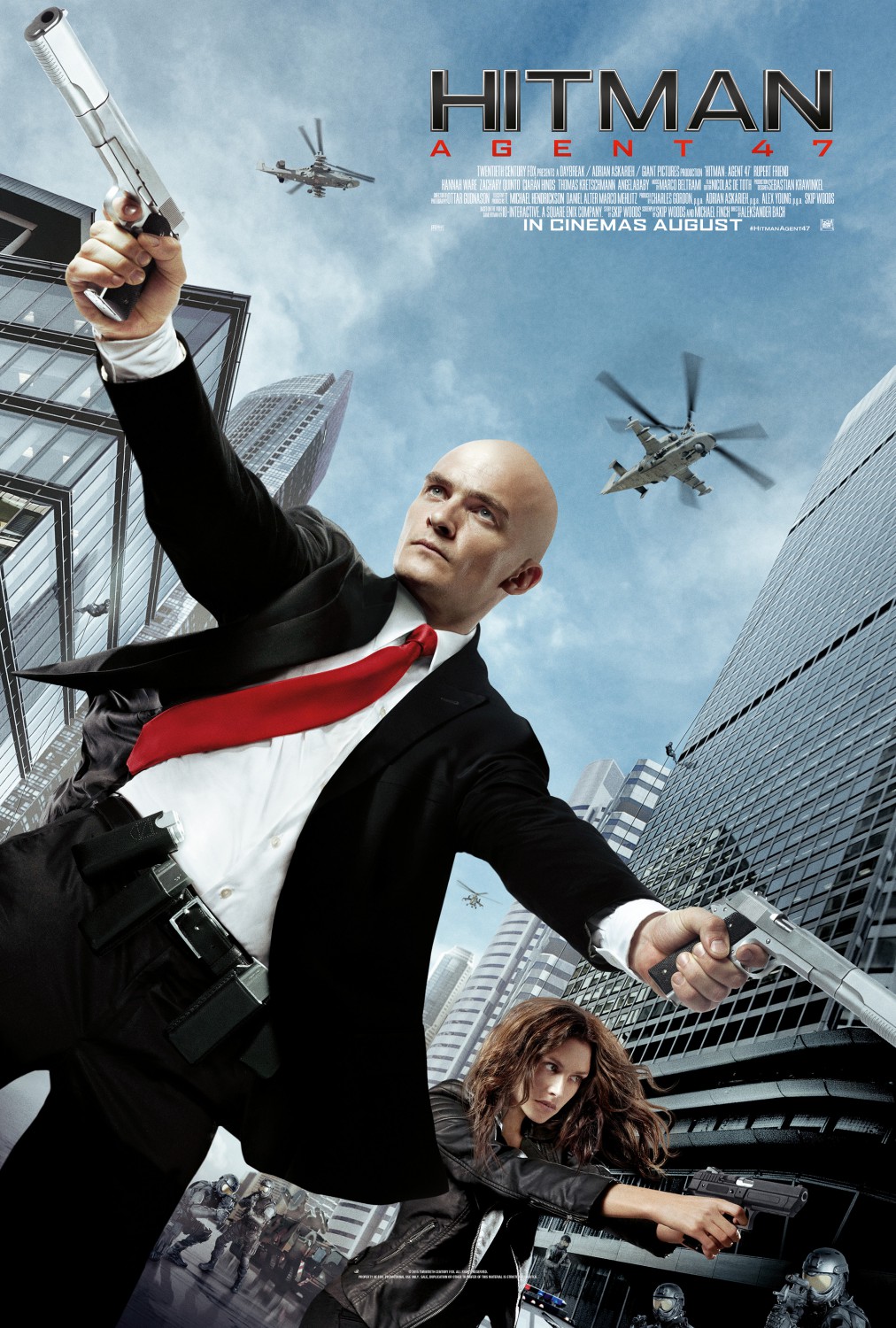 We are back in the Hitman universe with this reboot. They learned a lot of their lessons from last time fortunately so this one actually ends up being pretty fun. We’ve got some solid action, special effects, and the whole works. It even feels a bit more like a superhero kind of film with how we’ve got powers now and even 47 can shoot across the whole city. Yeah if you were looking for some Hitman action then you’ve come to the right place.

So the movie introduces us to Katia who seems to have the ability to see the future. It helps her get out of a lot of bad spots and she even saves some lives by utilizing this power. She has been trying to find someone for a while now but doesn’t even know why. The situation gets dangerous when a man named John Smith (I’m sure that’s his real name…) shows up and tells Katia that an assassin is after her so she has to trust him. The assassin of course is 47 who is pursuing her quite relentlessly. Perhaps this guy can help Katia find out why she has super powers and why she even wants to find this random guy from her visions. Either way they will need to move fast.

The first half involves a lot of chase scenes as they try to get away from 47 and I thought this was handled really well. 47 is a Hitman after all so he won’t always be the hero here. Putting him in as a villain makes for a very intense perspective and I definitely wouldn’t have minded if it stayed like that the whole time. He gets some great feats here too like when he goes on a roof and then shoots a bullet that goes through a train, car, past a bridge, and then into the car where Katia is to hit her. The shot is absolutely insane and even Hawkeye would have to give him some respect there. It’s really impressive all the way through and 47 is practically robotic with how he keeps on going.

Now I do have one absolutely major issue with one of the opening scenes though. So 47’s mission right now is seemingly to neutralize both Katia and John. He is authorized to do whatever it takes to accomplish this. Now as the film goes on you can see why Katia is okay for now but what about John? There are several times where 47 can finish him off but chooses to keep on going. These scenes only work if you assume that 47 actually is a robot. I’ll give you a quick scene here. 47 knocks John to the ground and then turns to set up his gun so he can fire at Katia. He gets really close to shooting her but then John tackles him so they fall to the ground.

Okay, time to shoot John and then go back to hunting Katia right? Wrong, 47 acts like John isn’t even there and gets up to walk after Katia. So…John tackles him again and they wrestle in the train tracks for a bit. Several times John will interrupt 47 and the Hitman will knock him away or land a punch but then go back to ignoring him. I thought that didn’t make any sense unless they changed scripts midway and he was going to be a robot. 47 seems to have no common sense in these scenes which is just odd because he is always portrayed as such a highly skilled agent.

Still, as a character he was really solid. I liked his scenes in the embassy where he is in control the whole time and talks tough. He talks a whole lot more in this film than in the first one and it works well. You get the sense that he is absolutely ruthless and now that he can explain his intentions to the other characters, it makes him that much more sinister. It was also just nice seeing the U.S. Embassy show up even if you knew they were going to be doomed after a while. So there was a whole lot to like about these opening scenes. Plus I also enjoy how everything was dialed up to 11 with the crazy shots across the city or even Katia using her powers to figure out where to go next.

As a character Katia is quite solid. She may have been lacking in confidence at first but this didn’t stop her from taking a risk to save the lady in the opening scene and then always staying on the run. Katia basically had to self teach herself how to use these strange abilities and to stay in the game which is not easy. By the end of the film she has really come into her own and it’s a shame that we won’t be getting a sequel because I think that could have been a great film. Certainly Katia would have had a nice role in it and I liked where the film was going.

Yes, we do have a cliffhanger here so get ready for that. It’s a really hype one though and you can pull quite a few comparisons to Terminator 2 here. I think in a lot of ways this film was trying to be like that one and it succeeded. So if we kept this up I think the movies would have gotten even better as we leaned more on the sci-fi angle. The final scene (pre credits) was just really excellent and exactly the kind of note you want to end the movie off on.

Diana actually appears in person for this film which was nice. She doesn’t seem quite as personable as in the first film though. Here she appears to be fully part of team corporate. I guess if you stay long enough they always get you but it would have been nice to have seen her in more of a heroic role. Then we have John Smith and he’s a fun character. I did find it a bit funny when Katia asked if that was his real name later on. Cmon now…it’s definitely not. The sad thing is if I ever met someone who was actually called John Smith I probably wouldn’t believe him. At this point the name is only used as an alias to the point where using that name actually just puts some suspicion on you.

Either way John was a really solid character here though. He definitely helped to bolster the cast. The movie has a fairly small cast of important characters to be honest but this way you can focus more on the plot and what’s going on. There are some other characters of course but these are the big ones. There is a whole lot of action here as well so you’ll definitely enjoy that. 47 gets to fight with guns, knives, and his fists. Everyone gets a little piece of the pie here.

The uniform still really stands out as well. This movie got to show off how versatile it could be as well by having 47 be a villain one moment and then someone you have to root for in the next. In some scenes he’ll remind you of Wesker even. This time the movie has quite a few twists and turns compared to the first which was more straight forward and it works out quite well. I did think the first one left things off on an interesting note as well but this one really raised the bar. It’s just a shame that it wasn’t better received because I need that sequel!

Overall, If you like a solid action movie then you should definitely enjoy this one. It’s a well rounded title with a lot of action and interesting plot developments. Sometimes the heroes can be a bit brutal with how they finish off their enemies like one kill in particular where the guy got crunched into oblivion but in Katia’s case she is fighting for her life and in 47’s case…he really couldn’t care less. You get the feeling he has some kind of plan going on that he’s not mentioning to anyone either but that could just be me overthinking it. It’s not like we’ll ever know for sure I suppose but hopefully we get another reboot or something soon because this series has a lot of potential.