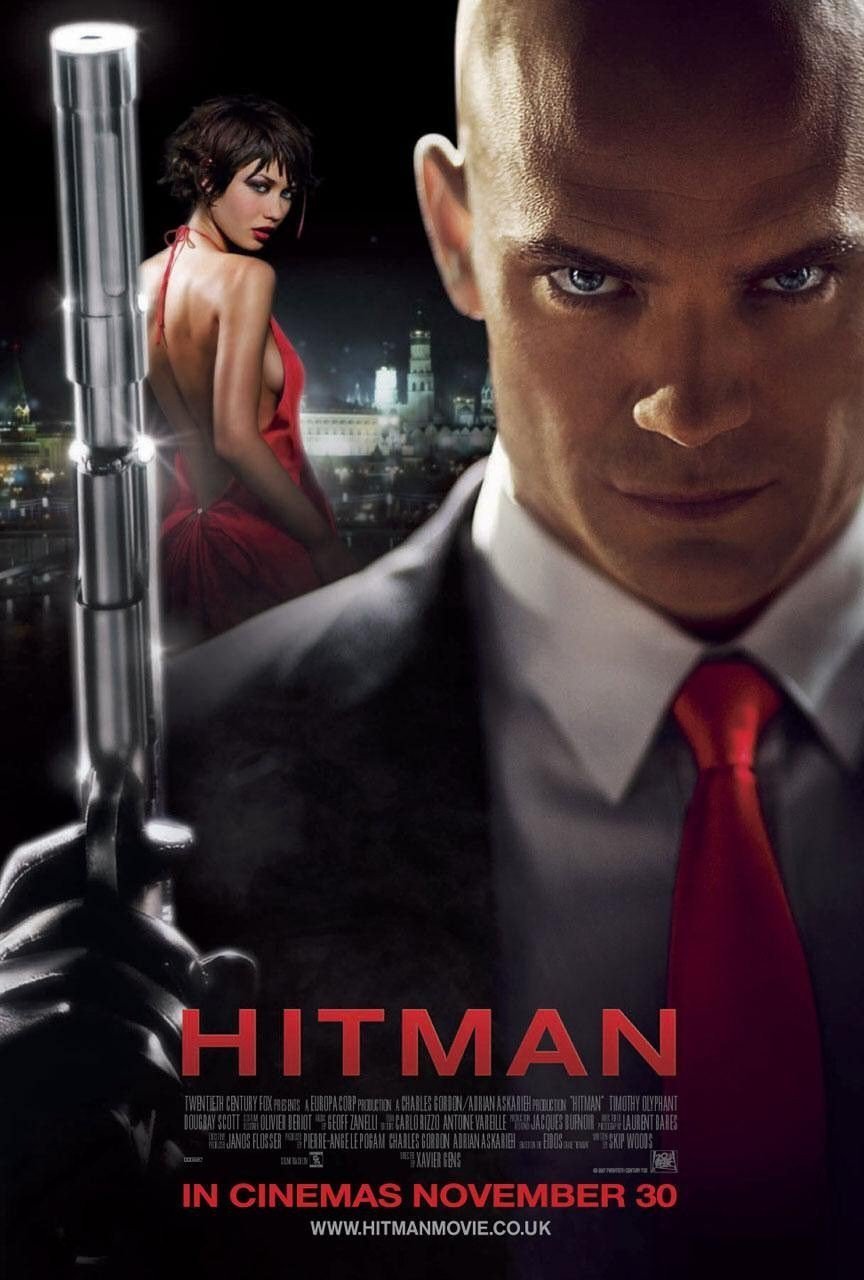 The Hitman video game series is definitely well known and you figure a film about it should be amazing right? Well, this one didn’t quite do it for me. It has some moments that show promise but ultimately just made too many mistakes which kept this from being the next big hit. At least they got the suit and tie right.

So the movie starts off with a quick origin for 47 and he gets the drop on the interpol agent Mike. We then get a flashback to 3 months ago to set things up. Here are the ground rules you need to know about this universe. A bunch of kids were raised to be future hitmen so they don’t show much emotion. The main character’s name is simply 47 and he has done really well. The head of the group or at least the one who contacts him is Diana and she has historically given him a lot of missions that he completes easily enough. Well, one day the mission appears to be a set-up as the guy (Mikhail) that 47 murdered is still alive and he’s told to murder a witness (Nika) who didn’t actually see him? 47 needs to figure out what is going on quickly to turn the tables on these guys or else his reputation as a top hitman may be on the line.

I do think it’s always an odd decision to have your first movie be something that changes the status quo to something you haven’t experienced yet. Shouldn’t a plot about 47 being betrayed by his group be a sequel’s plot as opposed to the original? At least give us a chance to see 47 working in a normal environment. In that sense I’d say you should have had the sequel take place first since the plot was more standard for 47. This is true for any film based on a franchise though, the first movie should feel like a classic adventure with whatever elements are usually in the games and then you subvert this later on.

Well, lets knock out some of the negatives right away. First up, the editing isn’t great and that’s a field I don’t even bring up unless it’s really bad. There are a ton of cuts in each action sequence so you don’t actually get to see the action a lot. Why do you need 5 different camera angles for someone getting punched? Now even if they actually did a solid punch on the set it’s hard to tell and you assume the choreography wasn’t very good. This happens a lot during pretty much every fight.

The only one that gets around this is the 4 man sword fight which is actually really good. Now that’s a fight that is a highlight in the movie and gave us a good look at what could happen here. If this had been the feel of the whole film then I think we’d be having a whole different conversation here. The sword fight was just really good. The gun battles and hand to hand are solid too of course but not nearly on the same level, particularly because of the cuts.

Then sometimes it felt like they were just taking short cuts. There is one scene where a character is walking through a underground parking lot of sorts. Instead of you know…having the character just walk all the way through before cutting away we see him take a step, then there’s a blinding flash of light. Then another step, another light, and then rinse and repeat for a third time before he vanishes. Beyond trying to give the audience seizures, what is even the point of that? It doesn’t make sense to me and felt like they just didn’t want to film the whole walking sequence or something happened and they lost some of the files.

I don’t mind a film being busy with a lot of effects (Kaguya season 1 handled this perfectly with lots of special effects everywhere) but they should have some kind of purpose to them. Otherwise it’s just adding effects to add them. Also, the romance here is pretty bad. Nika is a character who has effectively been held hostage for a long while by the villains. It feels like the last thing she wants to do is to get into an affair right now. There’s also no reason she would actually start liking 47 this quickly as she should still be in self preservation mode. He’s constantly threatening her and their whole dynamic just seems very weak. It all happens way too quickly and 47’s half hearted resistance will just make you roll your eyes.

This is a film that definitely didn’t need romance in the slightest. Finally, I thought the organization could have looked better. Now I don’t know much about 47’s group so maybe they’re all just evil anyway but at least Diana seems trustworthy with how she called 47 to warn him. How come she didn’t find out that the fix was in sooner? Also, why is the organization willing to sell out 47 this easily when he’s one of their best assets? Feels like they’re choosing the wrong side to me by a long shot. You don’t want to turn someone like 47 against you, that’s a terrible move.

Okay so for the good parts, I did like the Interpol agent Mike. That guy wasn’t about to get pushed around by the Russians and just kept going on the case to stop 47. He wasn’t getting distracted or tricked along the way either and just held onto his singular focus the whole time. He may never actually be a threat to 47 in anyway but his plot was always interesting.

47 himself was a decent main character as well. I wouldn’t say he was very good and he lost some points along the way but ultimately he always had a plan and would come out on top. He certainly got the upper hand on Mike quickly enough and took out a ton of villains at every point. I liked Diana even if her role was super small. I was not really a fan of Nika though. Certainly a tragic backstory for her but in the present she didn’t actually get to contribute much at all.

As for the villain Mikhail, well he is the kind of guy who panics a whole ton. The plan to frame 47 was solid without a doubt but the villains didn’t know how to follow through on that. There are a few other villains as well but none of them are particularly memorable. The movie goes through the motions and they get their moments where they come close to stopping 47 but you barely even see them as characters most of the time.

The soundtrack is pretty decent though. Some solid tunes in there and I did like the visual. The movie always made sure to show off 47’s suit and how the tie would practically glow. Fans will at least be satisfied that the outfit is pretty much a 1 to 1 recreation from the games. No expense was spared there and the ending also leaves some interesting plots for future installments. Of course no sequel would end up coming out but it did get you interested in the franchise as a whole and that is at least partially the goal in making an adaption like this.

Overall, Hitman wasn’t a success. For everything it did right, it did something wrong as well. I would place is squarely in the middle as a result and while there is a decent amount of replay value, I feel as though there is no real reason to watch it again. Watch Mission Impossible instead if you want to see some solid secret agent work or watch Terminator if you want to watch a stoic villain running around. After all, make no mistake, 47 is still a villain here. Just because his goals align with the heroes sometimes doesn’t change the fact that he is still a killer for hire who follows orders without really thinking about it. If the games keep in all of the interesting plot elements while touching the rest up then I can definitely see how this became a really big franchise.