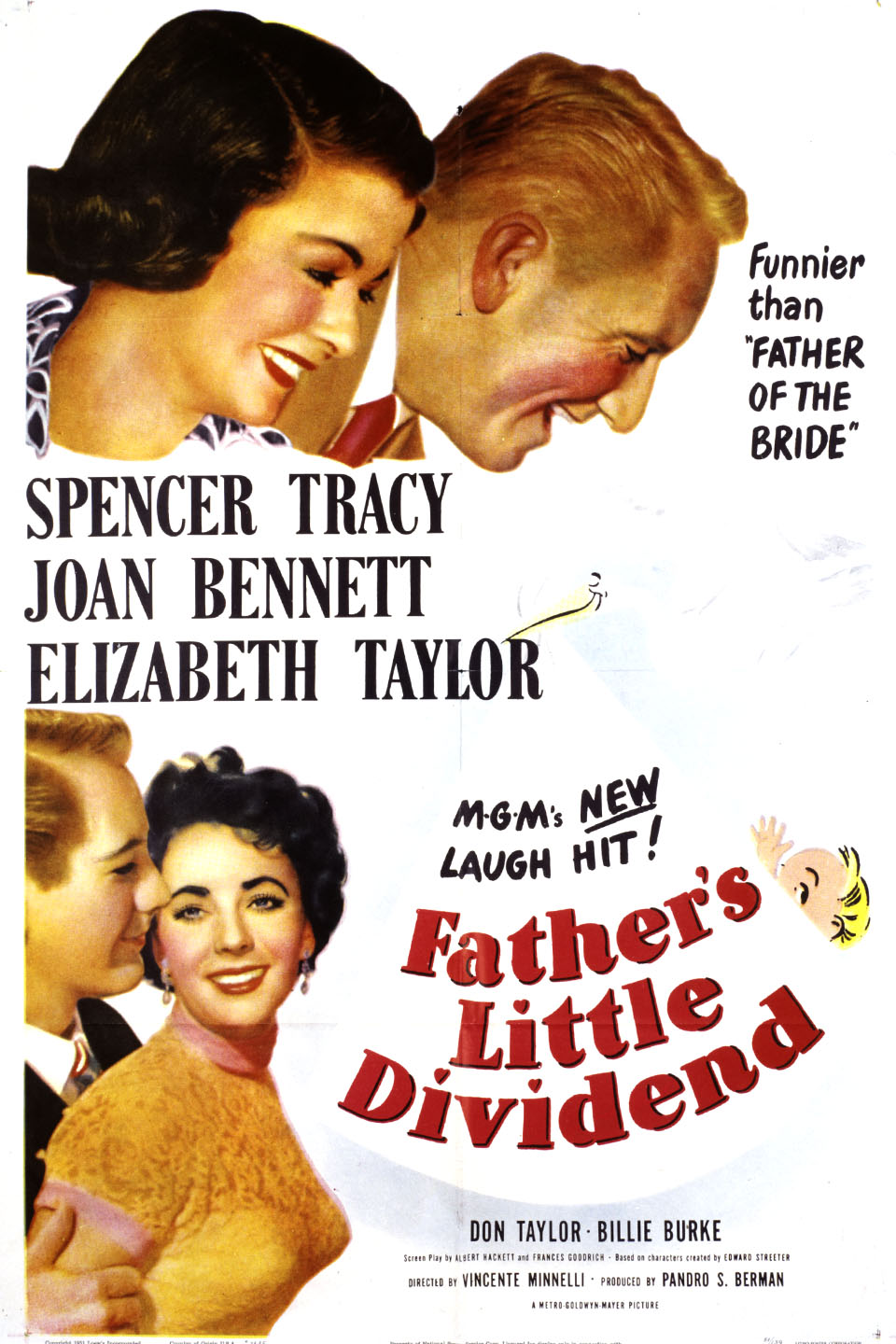 It’s time for the sequel to the last film in this series which means that Stanley is going to have to deal with another trial. You definitely have to feel bad for the guy because he just got done spending a fortune on the wedding and now there is a kid on the way. Granted there is a time skip of course as kids don’t just come out of the blue but it looks like the burden will be on him again. This is one dividend that he may not want to accept.

The plot starts with Stanley being in a good mood though. He is in a great point in his life where everything is working. His life is clicking like a well oiled machine which is just perfect. The problem occurs when his daughter Kay announces that she and Buckley are having a baby. This was not the good news that Stanley was hoping for and naturally a lot of issues start to come up. Kay and Buckley are fighting again and Ellie is hoping that they can move back in to the main house. Stanley will have to think of something quickly or his life is basically going to be gone yet again.

As with the last film I sympathized a lot with him here. You figure at least that after the marriage there would be peace as Stanley can visit and all but they’re still in separate houses and he doesn’t have to worry about anything. Asking them over to come and live at home is really a bit much. Ellie doesn’t take it well as she guilt trips Stanley but I feel like she could have been a whole lot more understanding on the matter. Certainly she can see how it would end up being a lot of trouble on his side here since a baby is really a full time commitment. It doesn’t help that the baby doesn’t even like Stanley and is always throwing a fit.

Of course Stanley’s no saint here either. He has one scene where he really messes up in leaving the kid alone for 30 minutes. Ultimately he is able to sweep this under the rug after the cops find the baby and he convinces them to stay quiet. It’s all well and good for him and his reputation but that was such a bad look for him. Beyond that he looks good here and ultimately he is as supportive as possible even when he’s not thrilled about the whole thing.

Both sides of the family fight a bit about what the baby’s name should be and if they want it to be a boy or a girl. I always thought that kind of conversation puts a whole lot of pressure on the parents because it’s not like you can really control that. As for the name, I personally think the parents should have that all settled before even talking to family so that there are no issues there. Imagine allowing peer pressure to dictate what the name of your kid would be. There’s no way that would end up being even a remotely positive experience for anyone involved.

I didn’t really care for Kay in the first film and that continues here. She still has a bad habit of dashing out of a situation where anyone starts to question her. She tends to panic at the drop of a hat and doesn’t handle her disagreements with Buckley very well at all. We don’t see the whole scene but the movie never portrays it as Buckley being super out of line but rather Kay just seems to be a little overly sensitive. Considering how long they’ve been together now you would figure that their relationship would be a little stronger so that it wouldn’t crumble at the drop of a hat like this.

As for Buckley, what happened to the guy? He was some kind of fancy young CEO in the first film but now he’s hard up for cash?? Does not compute. It felt like the movie needed some excuse for them to be on tough times financially but I think this could have been handled a little better. I can’t say I really liked Buckley by the end either. It’s really up to Stanley to hold the film together as per usual.

Ellie and Buckley’s parents are all reasonably good even if they don’t always seem to get along a whole lot. There’s definitely a lot of competitiveness going on between the two sides. Ultimately things always turn out well for Stanley and Ellie so I wonder how the other two feel about that. At the end of the day though it’s not like the characters are awful or anything so they still do a good job of keeping the movie going.

Where this film shines is that it’s just a fun rom-com. The movie has good pacing so it never drags on and I would say the script and writing are both good. You’re always sure to be entertained which is absolutely the important thing here. There’s a lot of fun little events you can have with a kid coming into the picture, especially when the kid himself doesn’t have a big role for most of it.

It’s the kind of film that does still feel long but more in the sense that a lot is going on as opposed to you feeling like they’re overplaying a part. In general that can be a strength of a rom-com. You can fit in a whole lot of scenes and development because the more low key the film, the more you have to rely on talking scenes and a lot can happen there. A single conversation in a movie can completely change the plot after all.

Personally I would say that the first film has the slight advantage though. It’s always hard to beat the first encounters and that’s when all of the characters really got to meet up. Additionally, the whole thing was a lot more personal with Stanley trying to stop Buckley as opposed to the kid who is coming whether he likes it or not. There is much less that he can actually do about the situation here and so the stakes aren’t nearly as high.

Overall, You should have a good time here. This is a film with quality writing throughout and is just fun. It’s got a good amount of replay value and I wouldn’t say that I had any serious issues with it. The series would probably need to change up the formula a bit if it got more movies but this works very well as a follow up. This kind of film rarely gets a sequel either so it’s fairly neat to see how the characters are doing after the events of the first movie.