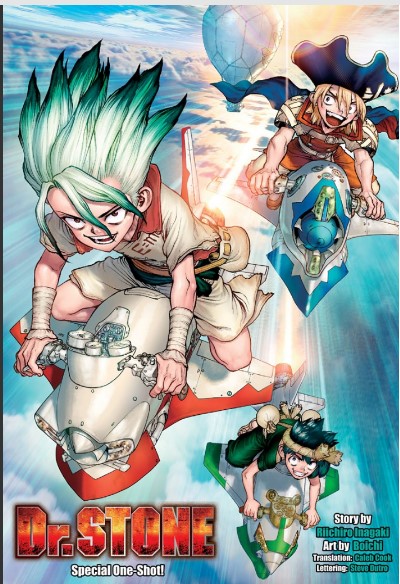 The Dr Stone manga may have ended a little while ago but the franchise lives on with the anime special, future seasons, and now this one shot. There are certainly a lot of other stories to tell here in the verse and I was glad to see that the one shot takes place after the series. It’s sort of like a speed run of readapting the first arcs but with the whole gang already around. It goes by quickly and captures the classic charm of the series.

The story starts with Senku lost at sea and no memory of how he got there. Gradually he remembers and basically the cast was on a plane when lightning struck and knocked them all down. They were able to use the revival formula to turn into stone but Senku fumbled the grab and so he revived himself by mistake. Now he is all alone in the middle of the ocean and has to try and survive now. Can he really pull this off without freezing to death? He may be the mighty Senku, but this is no easy scenario.

The reason why I say it’s sort of like a speed run version of the actual series is because from here Senku works on reviving the rest of the characters one by one and getting to safety. If not for the subplot with Dr. Xeno and the others, you could easily play this as an alternate take on chapter 1. What if Senku warped back but with his current knowledge? In a way it probably wouldn’t change a ton but he would have had an easier time of it. Sure enough, Senku does really well here and gets everyone up to speed.

I wouldn’t say any important developments happen here and that’s the norm for special chapters. This is really just a chance to get to see your favorite characters one last time. After all, there probably won’t be any other Dr. Stone manga chapters for a long while so you have to savor them as they come. It’s a fun adventure that definitely ends quickly but makes for a good all around story. We get some more inventions as well as the formulas for how to make them. For example, making sails out of fish skin definitely seems like a very obscure tactic that you probably wouldn’t think of right off the bat.

The characters are all around to help but for the most part Senku is really the one pulling the strings. Suika and Chrome get to help out with one idea though and as always Kohaku is good as actually doing the manual work. She may not succeed in getting Senku flustered but completes all of her other missions. I’d say the chapter is the author trying to really re-confirm to everyone that Senku is still a man of science who doesn’t have time for the more emotional moments. So anyone hoping that would change here probably will be in for a bit of disappointment but the series had been setting this up for a very long time at this point.

The artwork is as good as always. The series has a lot of detail and there’s just a whole lot of ways that it enhances a story like this. The oceans look good and all of the background details as well. It’s definitely the way to go. This artist certainly has a lot of skills so I look forward to him doing more stories whether it be Dr. Stone adventures or some more One Piece stories. Either way works.

In a way the story also sets up for a bunch of other sequels as well. There’s a lot of materials that the heroes need to get after all on their way to building the time machine. What I’m most interested in is how this will play out. What are the time travel rules that this series will use? Additionally, it may be easier said than done to actually prevent the whole stone event from happening. Senku has enough clout where maybe he could convince someone like Xeno to help him in the past but he would have to handle it very interesting. That could easily be enough for a full oneshot volume or something like that. I think it’s the next logical step in the Dr. Stone mythos.

Overall, This was a fun story. It just goes to show that no matter what kind of situation you put him in, Senku will be just fine. It helps that the revival fluid can help you cheat death at any time. A series about how this affects society would also be interesting. The fact that there’s a substance which can heal you indefinitely has to have had a major effect on the world right? It changes the way everyday life would be played out, particularly for risky kinds of situations that would be more standard now. If you enjoyed the main manga then you should certainly read this oneshot. It’s a very solid self contained adventure.