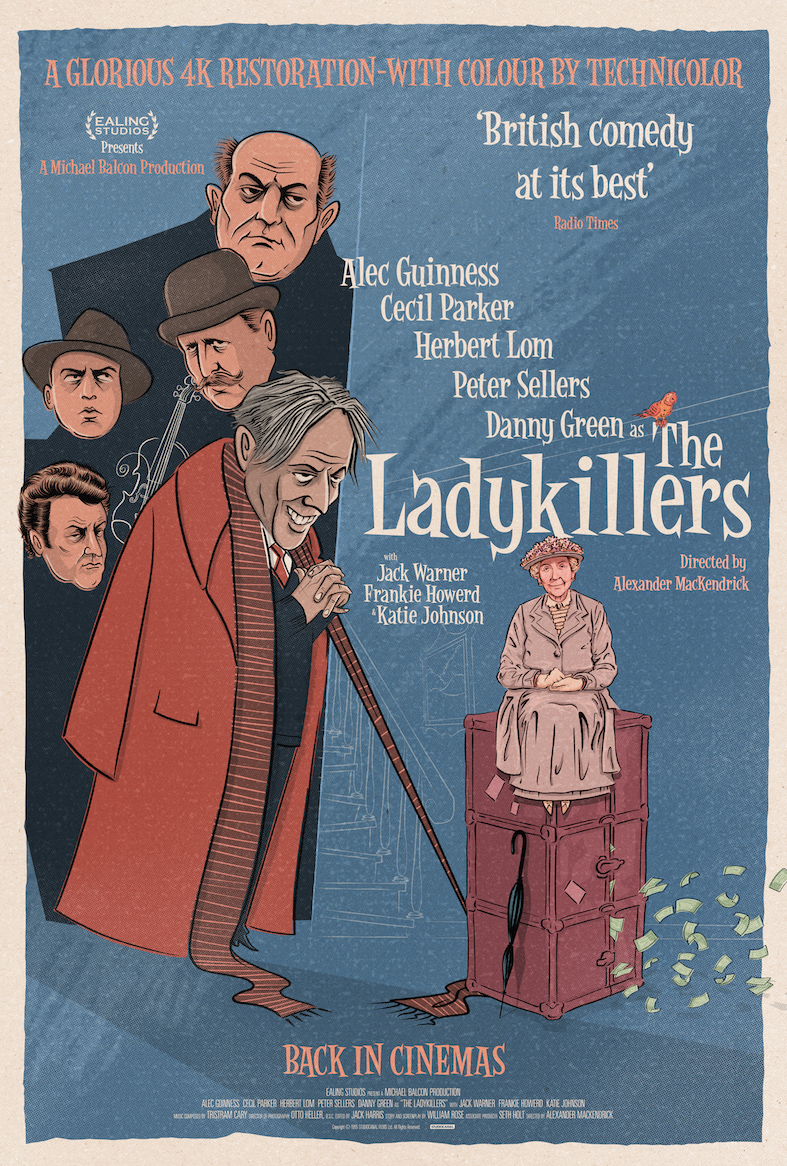 The Ladykillers is an old school comedy movie that has aged rather well. It’s got that low key humor which is always fun and while the movie may run a little on the long side as the pacing isn’t super dynamic, I would say that you’ll still have a good time with this one. You may just shake your head at how the main characters handle things at times. They definitely didn’t plan all that well for this caper and only get so far thanks to coincidences and luck.

The movie starts off by introducing us to Wilberforce who is always running to the police with wild stories. As a result they don’t believe her anymore and it’s a shame because she just wants to help but unfortunately isn’t very good as doing the detective work on her own. This would have at least let her filter out the crazier stories and could have saved her a lot of credibility with the cops. Well, one day she is approached by a Professor Marcus who asks if he can have the room she was offering in her house. She is glad to have a new tenant and agrees. The guy is even part of a musical band so now she gets to hear some free music.

What she doesn’t realize is that Marcus is a big thief. They pull off a rather large robbery at the railroad and even trick her into being an accomplice. Now they are just biding their time before leaving. Will she be able to get to the truth of this before they leave or is all that money about to vanish? Additionally, she may not be as safe as she thinks since these villains can sometimes get a little extreme about their money.

Naturally the humor here is that she’s having a merry ole time and is completely oblivious to what’s going on here. The villains aren’t exactly subtle and it’s just that she’s not too quick on the uptake here. If only she had more detective training then she may have been able to solve this. Since you know who the villains are from the start, it’s imperative that you find this amusing or you likely won’t enjoy the film as a whole very much. That is really the meat of the film after all.

And I would say it works out well enough. It’s not even too over the top silly for the most part as there isn’t a lot of slapstick or anything like that. The chase for her pet parrot comes awfully close though. It’s the kind of nice adventure that pads the runtime out a bit but feels rather random. At least it showed that the thieves were willing to go quite far to protect their cover as a nice musical band that is always here to help.

I can’t say I was a big fan of some of the villains though. The best one would probably be the leader Marcus. He’s the one who came up with the plan. While it may be a bit convoluted, it does end up working so you have to give him credit there. He’s also not someone who jumps into a fight too easily but is ready to mix it up if he’s disrespected too much. Louis tends to push him rather far. That guy’s the meanest of the group and the only one who is quite eager to take Wilberforce out even though she’s an older lady. He feels like she’s a threat to the plan and must be eliminated.

The other thieves at least aren’t on board with this but while they wouldn’t suggest it or commit the act personally, it doesn’t feel like they would do much to stop him. Ultimately that’s why you shouldn’t trust villains too far. Even if these guys may not be the ultimate evil or anything like that, there will definitely be times where they may cross the lines. They’re already criminals after all so it’s not a stretch that they could commit another crime.

I will say that the film’s climax/ending was rather unexpected. Given how calm and low key the whole movie was, I was expecting the ending to follow that trend. It ended up being a whole lot more exciting and explosive than I would have ever suspected. It still plays into the humor angle while also being rather serious there. It was a good way to end the movie and a wise move by the writer since it makes the whole thing a lot more memorable.

The music in the film was decent I suppose. It’s always nostalgic hearing those really old tunes. The thieves probably should have switched the track a little more often though. If the old lady was listening a little closer she would realize that it always sounds the same and may have realized that something was up. You could tell that some of the thieves weren’t really in with the plan from the jump though and weren’t super supportive about the whole thing. You’d think it would be a small price to pay for the money though, why grumble so much about something that’s rather minor? It’s why these guys never ended up being the top level thieves around.

Overall, The Ladykillers handles the comedy/action mix rather well. It’s so low key that some parts may start to feel a bit dull but the movie is just short enough where this isn’t a major concern. If it had been much longer then I think the film would have suffered for it. I probably would have taken the film in a bit of a different direction like having them all help the old lady out when a bigger thief shows up. I would say that they could do that for a sequel but it doesn’t feel likely. The premise itself is good though and works better as a comedy than as a really serious title. If you haven’t watched this film yet then it’s worth picking up.