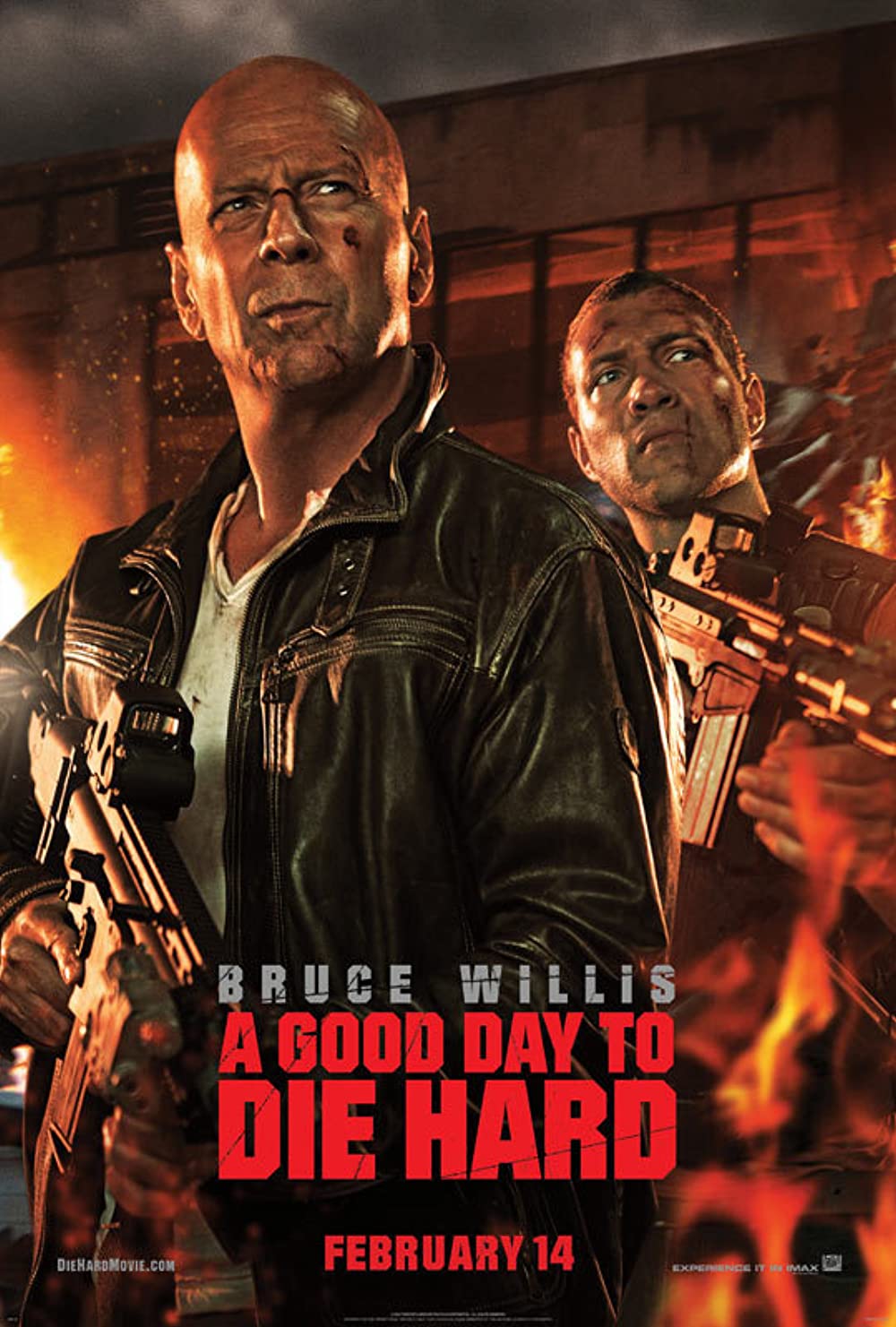 Die Hard’s a fun series. It may have its ups and downs with quality but you know that you’ll always be in for a lot of action and thrills. This one was a little better than I was expecting though and I would even say it beat the last two. It doesn’t quite match up to the original but has a nice spin on an older main character here. If only the kid wasn’t so annoying.

So the movie starts off with a villain named Komarov being ready to shed light on some recent corruption and tyranny from some Russian officials. The thing is, the whole trial is naturally fake and they’re just going to blow him up. Before that can happen, he is rescued by Jack McClane, the son of John McClane. This guy works for the CIA and is ready to complete his mission no matter what. Wouldn’t you know it though, John happens to be in the area and decides to help out. There’s a lot of friction between John and Jack though which threatens to compromise the mission. Can they put aside their differences to save Komarov?

Now I’m referring to both of them there but if we’re being honest every issue is completely Jack’s fault. He’s constantly getting on John about everything when it’s never about him. Seriously John saves the guy’s life early on and Jack has absolutely no gratitude to show for him. Jack’s just constantly yelling and being slow on the uptake. He seems to forget that John has saved the world multiple times.

The movie does try to give Jack a little support here as it reminds us that John was often away from home which would make things tense but I think you ought to cut him some slack. At the very least John’s doing his best to make things right and even if Jack isn’t ready to be friends yet, he doesn’t have to be antagonistic. I absolutely understand him not wanting to be a close family or anything as that’s a deep wound but lives are at stake and he’s supposed to be a professional agent so he could act like one.

There’s one scene where they just keep yelling each other’s name for a full minutes as they’re walking around and I couldn’t help but think that they were giving their location away to every possible villain in the area. There’s definitely a way to be discreet but the heroes haven’t mastered that yet. I didn’t like Jack at all as you can probably guess. He can’t even give John credit like when he was able to get some car keys and always has to have some kind of bravado going.

John carries the film here. He’s clearly tired of saving the world and just wants to rest at this point but steps in with no hesitation once Jack is in trouble. John just makes sure to blast the villains off the road and it shows that he will always be there for Jack when it counts. John can be a little sarcastic all the time but he’s still taking the adventure seriously. I can say with confidence that Jack would have been doomed without him.

As for Komarov…well he’s around a lot but there’s nothing too memorable about him. He’s someone who has to be kept alive so Komarov is always around but basically his only character is that he also wants his daughter to be safe and that ends up being a whole other thing. Once again the situation may have been avoided a bit if Jack was more cautious since John realized that something was up right away.

For the main villain Alik, the film tries to give him a fun personality as he rants about America but I wouldn’t say it works as well as the earlier films. He’s an okay villain but ultimately he’s just a guy in a suit so you won’t remember him much. I would say that the film’s biggest weakness is that the plot isn’t super interesting. I’d say the best parts of the film are more about the dynamic with John and the fun action scenes.

The actual plot you don’t care all too much about. So there’s another corrupt guy in Russia and we’ve got a whistleblower here to talk about it. For starters part of you feels like it won’t actually amount to much. These guys have enough power to have a fake court proceedings and were comfortable going to murder him out in the open so realistically…will this guy make a big difference? I suppose he should and we have to believe that but the stakes just didn’t feel as big as any of the other Die Hards. So even though it won overall against some of them, it just wasn’t for the story.

Where the film succeeds is with a solid script and pacing. The movie is always moving rather quickly and doesn’t waste any time. It may be by the numbers but the execution is good. The change in scenery worked rather well too, it all just looks a bit different. It makes for some fun battles on the streets since it all doesn’t look familiar. Finally there was one scene I appreciated where the villains told the heroes to drop their guns and John just didn’t.

After all, why would you possibly do that? The terrorists will just destroy you as soon as you drop it. Unfortunately Komarov has horrible reaction times so he messes this up and the heroes get taken out but otherwise John was going to go out blasting. I absolutely think that’s the right call. Hostages can make things tougher but otherwise you should always go down blasting instead of dropping your gun. All the latter will do is guarantee a slower and more painful death. At least if you’re riddled with shots you should die almost instantly.

Overall, A Good Day to Die Hard is a solid movie. It has a good amount of replay value and is the kind of film I could definitely watch again. It’s fairly stand alone as well so you don’t even need the context of the earlier films. In fact, not seeing those may make you sympathize with Jack more but it can also make John seem a little too good as he outpaces all of the CIA agents immediately. (Those guys don’t look very good here) I didn’t like Jack though and it’s hard to see that changing. When you watch the movie just be prepared to see him whining over and over again.

2 thoughts on “A Good Day to Die Hard Review”