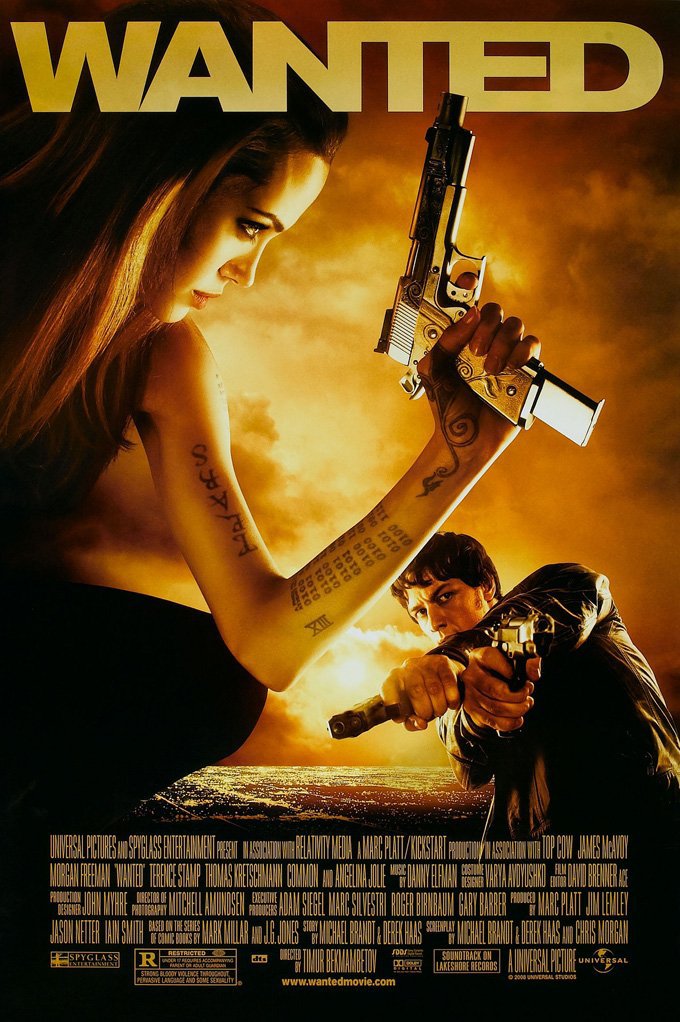 Wanted is definitely a comic book movie that’s fairly obscure. I wouldn’t say it’s hidden but I’m guessing not a whole lot of people would know that it’s a super hero movie right away. Even I didn’t know that at first and that’s saying something. It’s got some pretty good ideas and solid fights but definitely has its share of things holding it back as well.

The movie starts off by introducing us to Wesley who has not had a fun time of it. He’s not very confident at all to the point where he has constant stress attacks just by existing. He’s broke and his girlfriend is cheating on him with his best friend. This last one’s on him since he could at least just not be friends with them but it all keeps adding up and his boss is always chewing him out for slacking off. (Which he is slacking off but mainly because of all the stress attacks) Well, one day he is nearly murdered at the supermarket but gets saved by a girl named Fox. He’s taken to a shady building where a bunch of people with big knifes and weapons explain that he has super powers. He can use his enhanced reaction times to perform superhuman feats and also curve bullets with his mind. They want him to join their group of assassins to murder people based on names they get from the future. Then down the road he can take out his father’s murderer. Wesley would rather do anything than keep living out life in the way that he has been so he jumps at the opportunity.

Now right from the jump this sounds a bit sketchy right? You’re just murdering names from a sheet of paper? The context for this is that they have a printing press which directly leads to god in the future which lets them know of anyone who is going to commit some kind of crime and has to be murdered right away. The whole thing is on a trust basis of course and everyone has confirmation bias that helps them justify all the murders. Make no mistake though, by their own admission they are potentially murdering people who haven’t committed any crimes yet. In fact it’s very likely.

There are whole debates to be had on this for sure. It may be worth an editorial at some point but in general the consensus is that this is not a good thing because you’re still murdering someone who’s innocent. It’s also impossible to prove that destiny is fixed or that the future cannot be changed. You also have to be confident that the source writing the names is 100% accurate too because a single slip up would cause you to be murdering someone who shouldn’t be murdered.

Wesley does contemplate this for a minute but he quickly gets past that. He’s not the most heroic guy out there that’s for sure. The first half of the movie can go quite far with how the group beats him up to whip Wesley into shape. The only reason it works is related to another twist later on but if I was Wesley I would have gotten out of there asap or taken them out. What they put him through goes way beyond simple training and it’s just abusive the whole time. They’re lucky that he didn’t just snap at some point because he quickly surpassed most of them.

The final 20 minutes or so suddenly feels like they’re adapting the whole plot of a sequel really quick. I was surprised that they squeezed this all into one movie. It did help to make the ending really intense though so I can appreciate that. It ends the movie off on a rather solid note. So even if I had some issues, I didn’t have any with that part of the ending. It just goes to show that you should be careful when dealing with super powered opponents.

Now for the not as solid parts. First up is Wesley because I never ended up liking him. He’s just way too whiny at the start. I know that he’s had a tough road but he only just makes things worse and worse for himself. He whines a lot in his head as well and the whole speech is always very dramatic. It can be a bit funny at times from an outside perspective here but the character himself just needs to try and change things for the better on his own. Then once he gets strong the power immediately goes to his head and he becomes stuck up in all the wrong ways. It’s not until the very end where he is finally a balanced character. So he would be good for the sequel but he’s not quite there yet.

Then you’ve got Fox as the tough mentor type character but taken to the absolute extreme. She is not the person that you want mentoring you. After all you might not even survive such an ordeal. The only traces of romance in the film here also just feel like she’s manipulating Wesley so I wouldn’t consider that to be all that genuine either. She’s a tough fighter to have on your side but certainly not someone that I would trust at all.

Sloan is the big leader of the group so you can imagine that a place this shady would have a shady guy at the top. He’s interesting as it’s hard to really say what he’s thinking until he explains it later on. I would say that he’s an interesting character. Not a standout villain or anything but one that does make you think. I thought that he was more impressive than most of the other characters at least and I liked his grand master plan.

The film can definitely be a bit violent with all the head shots. Neither the villains or heroes are playing around here that’s for sure. As mentioned, the main character is also annoying the whole time and he really puts up with a lot in the training. I absolutely would have fought back more if I was him. It all makes sense in retrospect of course but it also shows why Wesley should have just done more to protect himself. If the film toned down how excessive it could be at times then it would be all the better for it. It’s not super crazy but enough to be noticeable. Making Wesley a bit more independent and able to do things on his own would have been nice too.

Overall, Wanted had a lot of good fight scenes and an interesting premise. I’d certainly be interested to see how they would build off of this for the sequel. With the introductions out of the way and the main character a little more accustomed to his abilities I think it would probably beat the first one. Assassin films can always be very interesting when done right. They’d need to build up some solid threats for him to face but that shouldn’t be hard. I wouldn’t be surprised if there were more powerful organizations out there. With most of the character cast gone too we’ll have an opportunity for a much better character cast and lets cut out the exploding mice too. Don’t need any of those kind of weapons that make the main character look even worse and more villain-like.