This review is of the TV-14 edited version of the movie. All thoughts below should be addressed as such as a review of the unedited version would be more negative 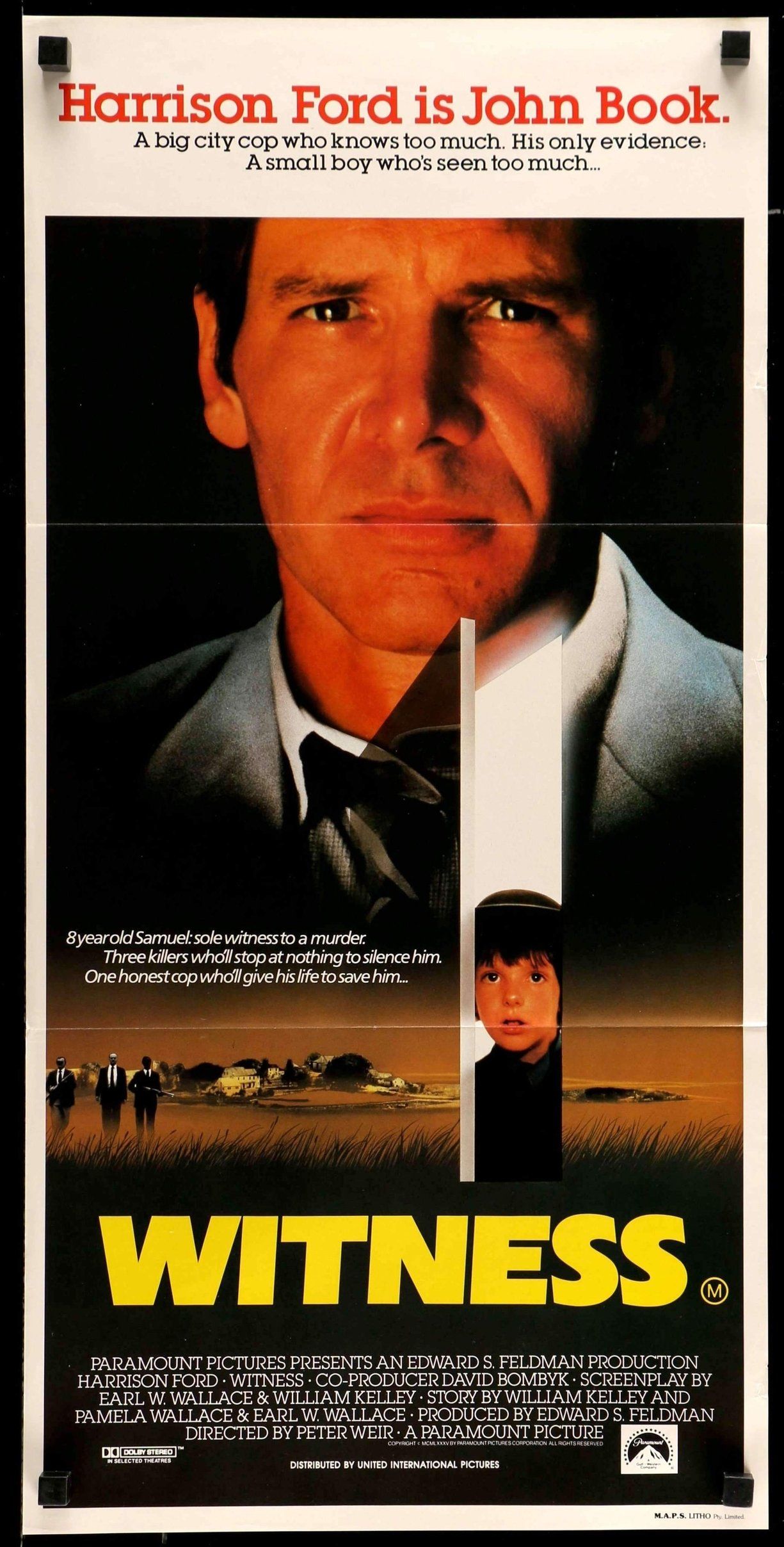 Witness is one of those thriller films with the lead on the run as he has to quickly think of what to do next. I would say the main difference here compared to most is that there is actually a large portion of the film where there isn’t any real action. Instead you have John getting used to the Amish life before the big climax. I would still say it works well though and it’s a solid all around movie.

The story starts with Rachel and her son Samuel heading off to the big city. I forget exactly why they were here but they’ll be heading back to the Amish community pretty soon. Their plans are derailed though when her son Samuel witnesses a murder in the bathroom. A cop was murdered by two attackers, one who is another officer. So this was an inside job but why? That’s for John Book to find out but in the meantime Rachel and Samuel have to stick around as material witnesses. This changes when the corruption appears to go higher than John thought possible so they have to take off. Hiding in an Amish community is a good bet but how long will this last?

For once the villains actually have a tough time locating the heroes because of how nobody here uses phones or anything like that. Nobody is really playing ball with helping the villains get in either so they have to take the long approach to this. It’s an interesting dynamic and something that’s not seen very often at all. So I liked the change of pace here and John is a good sport about trying to fit in. He may not be too familiar with their ways but this doesn’t stop him from helping out like with carpentry.

John isn’t willing to go all the way like suddenly being a pacifist when someone is picking a fight. He still insists on doing things his way and can’t say that I blame him there. I understand it’s the Amish way not to fight back when you’re being attacked at least based on this film but to me it definitely can hit a point where it goes too far and so of course you have to defend yourself here. If John didn’t do anything then things were only going to keep on escalating. So I could definitely back him up there.

In general he’s just a very reasonable character and does well the whole time. Even at the end of the film he makes the right call I would say. Choosing to stay would have been messy and he has a lot of responsibilities of his own. In the end you can count on him to make a rational decision no matter what. As for the heroine Rachel, she is at a bit of a crossroads in her life as she starts to see how the system can be a bit restrictive but at the same time it’s all that she’s ever known. I feel like she would have ended up choosing John over everything if he had asked but ultimately neither one wanted to make the first move.

Rachel is initially very antagonistic towards him but gradually softens up as the film goes on. Her son Samuel did well to not get murdered during the opening scene. He was able to think fast which came in handy and then he also had a critical moment near the end of the film. As far as kids go he was okay. Then I liked John’s partner Carter. Ultimately that guy was a real loyal companion. Usually things don’t go well for that character in these things so you can always appreciate their bravery for doing the right thing and standing up to the villains.

Schaeffer is the main villain here and he’s certainly a difficult obstacle to get past for John. I thought he was handled well here as a solid mastermind type character. You know that he’s quite twisted right from the jump even as he’s always joking around. To him murder just isn’t that big of a deal and he’s the kind of villain you really want to avoid. Ultimately they’re lucky that he wasn’t any crazier because the ending could have easily turned out badly for all parties involved. It was still a good plan of course but yeah it came close to backfiring in the end.

Really the weakest part of the film is the romance. It just doesn’t have much of a purpose being here. It’s expected as soon as we find out that Rachel is a single mom and all but it still doesn’t feel natural. It would have been a lot better to have kept them as friends. Additionally you have her childhood friend who seems to expect that he will marry her someday but she’s not really in love with him. He seems like the fallback plan since she feels like she has to marry someone at some point. With how the film goes it seems like this is still on the table but it has to be in the least satisfying way possible for both of them. How could either one of them be happy with the setup being this way? All this is going to do is frustrate both of them.

The action scenes are solid and John has to try and hang in there without his gun for a little while. That helps to make the climax a little more tense the whole time since it would have been a lot easier if he had his gun. The battle in the parking area was also solid. The movie has a very fast beginning and ending. The middle will drag if you’re expecting a lot of action but the non-action scenes were still solid. Rachel’s father Eli could be annoying as he was super rigid in his customs though. You definitely want someone who’s a little more flexible so you can have a real dialogue there. He didn’t do much to try and close the gap between them.

Overall, Witness is a pretty good movie. I thought the writing and plot were sound. Corruption can always be a good vehicle for a lot of scenarios and having John use the Amish location as a way to hide was genius. I did always think it was an interesting lifestyle. It’s not for me since I need my electronics and everything but I’m sure it’s a good way to really build a lot of community and for everyone to get used to leaning on each other when the going gets tough. In the big city life you’re less likely to get close to a lot of people like that.